According to WHO reports, cardiovascular diseases (CVDs) are one of the major causes of death globally. This is 31% of all global deaths. Despite advances in pharmacological and surgical interventions, following ischemic cascade result in cell apoptosis and extensive loss of cardiomyocytes. Due to the proliferation capacity of cardiomyocytes is highly limited, so the loss of cardiomyocytes follows fibrosis and formation of non-contractile scar tissue and heart failure (1,2). Currently, cardiac transplantation is the only definitive treatment in patients with end-stage heart failure, however, it is limited by organ donor shortage and high risk of immune rejection (3,4).

Cell therapy has been proposed as an alternative method to restore damaged heart tissue. Stem cells possess a remarkable regenerative potential and many studies suggest stem cells as an available alternative approach for the treatment of damaged heart (5-7). Embryonic stem cells (ESCs) and adult stem cells (ASCs) have been used for cell therapy procedures, but ESCs have some limitations such as teratoma formation and ethical considerations (8-10). ASCs, have been successfully isolated from various sources and they have multi-lineage differentiation potential. Among all ASCs sources, adipose tissue-derived stem cells (ADSCs) are the most established and potent source for ASCs. This has been due to ease of isolation, therefore has been used all over the world for the treatment of various diseases, including cardiovascular (11-13).

To increase the efficacy of cardiomyocyte differentiation, ultrastructural aspects of mesenchymal stem cell-derived cardiomyocyte-like cells should be investigated and included as an important parameter. We hypothesized that prolonged maintenance of ADSCs in culture after 5-Aza could improve their differentiation potentiality. Therefore, this study aimed to evaluate the in vitro potential differentiation of ADSCs into cardiomyocyte over 10 weeks through cardiac gene expression and ultrastructural features. We present the following article in accordance with the MDAR reporting checklist (available at http://dx.doi.org/10.21037/sci-2020-007).

Three healthy women, ages 40±3 years, underwent elective liposuction procedure in a hospital in order to collect adipose tissue samples. The study was conducted in accordance with the Declaration of Helsinki (as revised in 2013). The study was approved by the ethics board of Kerman University of Medical Sciences, with approval number: IR.KMU.REC.1394.639. Written consents were obtained prior to this course of action. The cells were isolated according to previously published protocol with slight modification (20). Samples were washed with PBS containing antibiotics. After that samples were cut into small pieces and were incubated in culture media with 0.5 mg/mL collagenase type IV, they were shaken intermittently at 37 °C for 1 hour. After centrifugation cell pellet was cultured in DMEM/F12 supplemented with 10% (V/V) FBS, penicillin (100 U/mL), streptomycin (100 U/mL) and amphotericin-B (2.5 µg/mL) and the medium was changed twice weekly until the cells reached 80% confluence. Immunophenotyping of cultured ADSCs was assessed by flow cytometry and multilineage differentiation of MSCs was evaluated by Induction of adipogenic, osteogenic and chondrogenic differentiation as previously reported (21).

For cardiac differentiation, 1×104 cells/cm2 ADSCs at 4th passage were seeded per well in 6 well plates. The following day, the cells were incubated in the cardiogenic medium containing DMEM/F12, penicillin (100 U/mL), streptomycin (100 U/mL), amphotericin-B (2.5 µg/mL) and 50 µM 5-Aza for 24 h, then the medium replaced with noninductive medium over 10 weeks.

The experiment to extract the total RNA from the treated ADSCs using a precipitation method by means of RNX total RNA isolation Kit (CinnaGen, Tehran, Iran) was performed 1, 5, and 10 weeks after the beginning of experiments, as stated in the manufacturer’s manual. Agarose gel electrophoresis was used to evaluation of quantity and quality of total RNA extracts. Then first-strand cDNA synthesis kit (Revert Aid cDNA synthesis kit, Thermo scientific, USA) was used in order to perform reverse transcription. After cDNA synthesis, expression of target genes including connexin 43, cardiac troponin I (cTnI), MLC2v and β-myosin heavy chain (β-MHC) using specific primers (Table 1) was performed using the Maxima SYBR Green Master Mix (Thermo Fisher) in a thermal cycler (Corbett Research, Inc., Sydney, Australia). Relative expression of the sample gene was evaluated by 2−∆∆Ct method and was normalized to GAPDH as the internal control (22).

At the end of the 10th week, the cell pellets were washed with PBS and fixed in 2.5% glutaraldehyde in 0.1 M phosphate buffer (pH 7.4) at 4 °C for 24 h and then washed with 1 mL of phosphate buffer. Then, cells were post-fixed in 1% buffered osmium tetroxide for 2 h and washed with distilled water. The cells were dehydrated in graded series of alcohol, cleared in acetone and embedded in epoxy resin. Ultrathin sections were prepared by an ultramicrotome and placed on copper grids, then stained with uranyl acetate. Sections were observed under a Zeiss EM 900 TEM (Germany) at 80 kV voltage.

Our results were presented as mean ± standard deviation (SD), and data analysis was performed using SPSS 16 software package. The groups were compared by one-way analysis of variance (ANOVA) with post hoc correction. The difference between groups was considered as statistically reliable at P≤0.05.

Expression of cardiac-specific genes during 10 weeks

To evaluation cardiac differentiation of ADSCs, gene expression profile was quantified 1, 5, and 10 weeks after cell induction. We used untreated mesenchymal stem cells 2 days after seeding as a control group. Expression of maturation markers such as connexin 43 and MLC2v significantly upregulate after first as well as 5th and 10th weeks compare to control group. Expression of cTnI revealed an incremental increase and the highest expression was shown in the 10th week. Whereas expression of β-MHC significantly upregulated after the first week as well as the 5th weeks and then significantly downregulated at 10th week. Consequently, the results of qRT-PCR showed that the rate of expression of cTnI (approximately 10 folds), connexin 43 (approximately 4 folds) and MLC2v (approximately 4 folds) at week 10th increased compared to the first week (Figure 1). 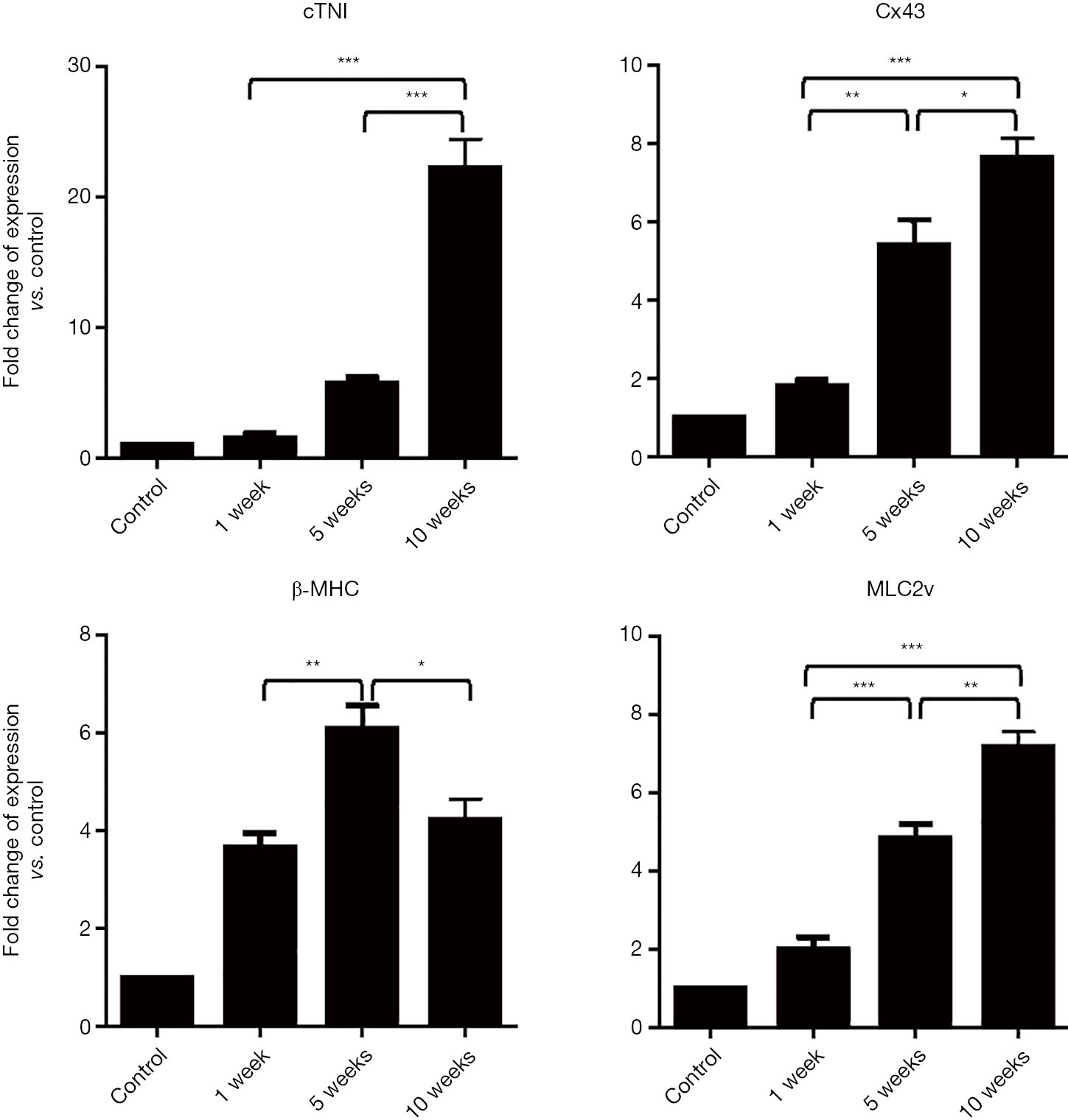 Our data showed prolong maintenance of the cells after exposure with a high dose of 5-Aza can promote cardiac genes expression.

At 10 weeks after cell induction with 5-Aza cytidine, cells and their nuclei were elongated. Dense nuclei which contain some heterochromatic regions were observed in the differentiated cells. Myofibrils which oriented primarily parallel to the longitudinal axis of the cells were used to fill cell cytoplasm. Densely packed mitochondria were determined in close association with the myofibrils. In particular, the sarcolemma of cells developed tubular invaginations and made transverse tubules (T-tubules) that penetrated between myofibrils in the cytoplasm. Differentiated cells showed abundant sarcoplasmic reticular membrane, and intercalated discs (mixed type junction) with adherents, gap, and desmosome junctions (Figure 2).

The possibility of using stem cells as an alternative treatment in end-stage CVDs has opened up new prospects in regenerative medicine. But transplantation of pre-primed stem cells suggested better regenerative potential than untreated stem cells in CVD treatment (23,24). Recent studies reported that ADSCs could differentiate into cardiomyocyte-like cells if optimized culture conditions were provided (25). Many previous studies have proved the effects of DNA methyltransferase inhibitor 5-Aza on cardiomyocyte differentiation (17,26,27). Although there are several studies showed the differentiation, efficient generation of cardiomyocyte-like cells by using 5-Aza has not been established and the main challenges are to find an effective method in which the cells can be differentiated at a very high efficacy. Reports have implied increasing 5-Aza dose and exposure time of mesenchymal stem cells that may improve the efficacy of differentiated cells (6,28,29). The goal of this study was to present the protocol to generate efficient cardiomyocyte like cells with typical ultrastructural characters.

This study used freshly isolated ADSCs, that previous reports suggested being a suitable choice for stem cell therapy in CVDs (10). These cells were placed under 5-Aza induction. 5-Aza has been used in different dosages to cardiogenic differentiation and many studies reported high dose use of 5-Aza, e.g., 50 µM was more effective than low dose such as 3 µM (28). Since continuous exposure of high-dose treatment might lead to dramatic cell death, we used 50 µM 5-Aza for 24 h and the treated ADSCs were maintained over 10 weeks. Then the expression of cardiac-specific genes like connexin 43, cTnI, MLC2v and β-MHC were evaluated at the first, 5th and 10th weeks after induction. Recent studies suggested that 5-Aza increased functional and structural gene expression in differentiated cells (6,10,28). Our findings showed that the pattern of connexin 43, cTnI, MLC2v genes expression was in a time-dependent manner and increased incrementally from the first to the 10th weeks after induction, but the expression of β-MHC increased at first and 5th weeks compare to control group and then decreased at 10th week.

Since the highest gene expression was observed at week 10, therefore, ultrastructural features of differentiated ADSCs were assessed at the same time. Our ultrastructural results revealed matured ultrastructural cardiomyocyte like cells; there were large, elongated cells with condensed heterochromatin ovoid nuclei; also, some mitochondria and sarcoplasmic reticulum was observed in the cytoplasm. The existence of parallel arrays of myofibrils could be defined as an organization of the contractile structures. Additionally, we found the T-tubular system and a specific junctional structure of cardiomyocytes such as fascia adherences, desmosomes and gap junctions. This ultrastructure would be reported by previous studies; Piryaei et al. reported the myofibrillar organization, the formation of T-tubules and intercalated discs after 8 weeks of induction with 5-Aza (6). On the other hand, Rachel et al. showed morphology and structure of differentiated cells would improve by an increase in 5-Aza dose (29).

These results suggest that 5-Aza at a dose of 50 µM for 24 h is an efficient inducer for cardiac differentiation of ADSCs. However, differentiated cells in this study did not have a beating, so the cells were not mature enough like in vivo cardiomyocytes.

In summary, the proposed new protocol demonstrated a positive outcome for cardiomyocyte differentiation by 5-Aza cytidine. The data showed that differentiated cells can express cardiac-specific genes and these cells have mature ultrastructural features. Although further studies are required to gain functional differentiated cells. The proposed in vitro culture system for the generation of cardiomyocyte-like cells has several potential applications in CVDs, including regeneration of cardiac muscle cells.

We would like to thank Dr. Zahra Ramezani in the electron microscopy laboratory of Shahid Beheshti University.

Funding: This work was supported by both Modares University (grant number: 91-20-33-2003) and Kerman University of Medical Sciences (research plan number: 1729).

Reporting Checklist: The authors have completed the MDAR reporting checklist. Available at http://dx.doi.org/10.21037/sci-2020-007

Conflicts of Interest: All authors have completed the ICMJE uniform disclosure form (available at http://dx.doi.org/10.21037/sci-2020-007). The authors have no conflicts of interest to declare.

Ethical Statement: The authors are accountable for all aspects of the work in ensuring that questions related to the accuracy or integrity of any part of the work are appropriately investigated and resolved. The study was conducted in accordance with the Declaration of Helsinki (as revised in 2013). The study was approved by the ethics board of Kerman University of Medical Sciences, with approval number: IR.KMU.REC.1394.639. Written consents were obtained prior to this course of action.