CD44 is an adhesion molecule that plays essential roles in various cells and multiple organs through a number of signaling pathways (1). Although the precise function of CD44 in the central nervous system (CNS) remains unclear, previous studies demonstrate that CD44 plays an essential role in regulating the neural cell functions; such as axon guidance, synaptic transmission, oligodendrocyte and astrocyte differentiation, and brain protection and regeneration after injury (2,3). In the CNS, it is well-documented that CD44 is expressed in various neural cell types, such as neurons (4), astrocytes (4-6), and oligodendrocytes (6,7). However, increasing evidence shows that CD44 is observable in neural stem/progenitor cells (NSPCs) (8,9). NSPCs reside in a perivascular niche (10) and produce all neural cell types, including neurons, astrocytes, and oligodendrocytes (11). In addition, Naruse and colleagues found that CD44 expression is dynamically altered from NSPCs to neurons and astrocytes in the developing brain (4), indicating that CD44 is first expressed in NSPCs rather than mature neural cells.

In various organs outside the CNS, CD44 is expressed in multipotent stem cells, such as mesenchymal stem cells (MSCs) (12,13) and adipose-derived stem cells (ADSCs) (14,15), which localize at the perivascular niche of bone marrows and fat pads, respectively. Although the precious traits of multipotent vascular stem cells in the CNS remain unclear, increasing evidence indicates that brain pericytes are likely multipotent vascular stem cells (16) because of their perivascular localization and multipotency (17-19). In support of this viewpoint, we previously demonstrated that brain pericytes/perivascular cells following ischemia exhibit multipotency (20); thus, ischemia-induced stem cells (iSCs) have the potential to differentiate into neural and also mesoderm lineages (20-29), consistent with the traits of multipotent pericytes (17,30-34). Further, we recently demonstrated that iSCs express CD44 (21,35,36) and that iSCs can differentiate into various neural cell types, including microglia/macrophages lineages (22). As microglia/macrophages function in stem cell niches within the brain (37,38), this suggests that CD44 can be expressed stem cells and the niche cells surrounding them following ischemic strokes.

Preparation of samples from brains

CB-17 mice were anesthetized with sodium pentobarbital and transcardially perfused with 4% paraformaldehyde (PFA) as described previously (20,35,41). Next, whole brains were carefully removed, subjected to post-fixation with 4% PFA, and processed for paraffin embedding. Samples were then cut into 8-µm sections, followed by immunohistochemistry. In another experiment, fixed brains obtained from CB-17 mice or Nestin-GFP mice were cryoprotected in 30% sucrose, frozen at −80 °C, and cut into 16-µm sections using a cryostat for double-staining using immunohistochemistry. 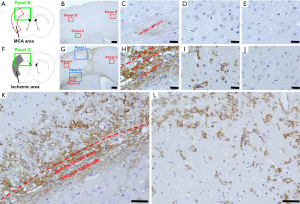 Thus far, our data indicates that CD44+ cells are dramatically increased within ischemic areas following stroke. Previous studies demonstrate that CD44 is expressed in various types of neural cells, including neurons (4), oligodendrocytes (6,7), and astrocytes (4-6). Thus, using brain sections at post-stroke day 7, we examined whether CD44 is expressed in our cerebral infarctions. Immunohistochemistry showed that CD44+ cells within ischemic areas did not express the neuronal marker MAP2 (Figure 2A,B,C,D) or then oligodendrocytic marker MBP (Figure 2E,F,G,H). In addition, CD44+ cells in peri-ischemic areas including the corpus callosum did not express MAP2 or MBP (data not shown). However, some CD44+ cells in peri-ischemic areas expressed the astrocytic marker GFAP (Figure 2I,J,K,L). 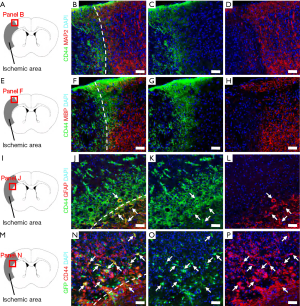 NSPCs produce various types of neural cells, including neurons, astrocytes, and oligodendrocytes (11). In addition, previous studies showed that CD44 is expressed in NSPCs (8,9). Furthermore, we previously demonstrated that NSPCs develop in ischemic cores and in peri-ischemic areas following stroke (26,40). Thus, using nestin-GFP transgenic mice, we investigated whether GFP+ cells at the site of ischemic areas express CD44. Using immunohistochemistry, we observed that GFP, under the control of the nestin (a NSPC marker) promoter, was present in ischemic cores and peri-ischemic areas and that some GFP+ cells co-expressed CD44 (Figure 2M,N,O,P).

The above findings demonstrate that CD44 is expressed in neural lineages, including NSPCs, after ischemic stroke. However, evidence exists for CD44 expression in various types of stem cells, including MSCs (12,13) and ADSCs (14,15), as well as NSPCs (8,9). Although the precise origin of MSCs and ADSCs is unclear, increasing evidence indicates that they have similar traits to those of pericytes (44-48). In addition, we demonstrated that brain pericytes following ischemia develop into iSCs (20,24,43) and that CD44 is expressed in iSCs that co-express nestin as well as PDGFRβ (21,35,36). Thus, we investigated whether CD44 is expressed in iSCs. Immunohistochemistry identified CD44+ cells at the site of ischemic areas localizing around CD31+ endothelial cells (Figure 3A,B,C,D,E) and that they also expressed PDGFRβ (Figure 3F,G,H,I,J). Furthermore, some GFP+ cells in ischemic cores and peri-ischemic areas co-expressed PDGFRβ (Figure 3K,L,M,N,O). These results indicate that CD44 is, in part, expressed in iSCs; which likely originate from brain pericytes. 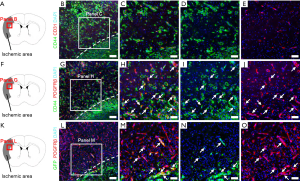 Given the variety of CD44 expression we observe in our infarctions, we investigated whether CD44 is expressed in stem cell niches (e.g., hematopoietic cells including inflammatory cells) surrounding NSPCs and/or iSCs. Immunohistochemistry at post-stroke day 7 demonstrated that many CD44+ cells, in particularly those with round shapes, expressed the hematopoietic marker CD45 (Figure 4A,B,C,D,E). As CD45 is known to be expressed in microglial lineages during brain pathologies (5,49), we further examined whether CD44 is expressed in microglia/marophages following ischemia. Immunohistochemistry at post-stroke day 7 indicated that some CD44+ cells in ischemic cores and peri-ischemic areas expressed the microglia/macrophage cell marker Iba1 (Figure 4F,G,H,I,J). These results indicate that, under ischemic stroke, CD44 is expressed in stem cell niches including activated microglia/macrophages as well as stem cell populations. 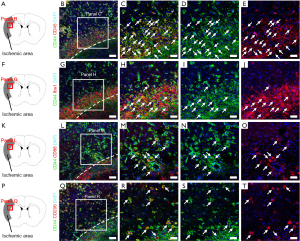 As activated microglia/macrophages are known to polarize into two distinct subtypes (pro-inflammatory M1 and anti-inflammatory M2 types) (50-52), we next investigated whether CD44+ cells in ischemic areas expressing the M1 marker CD86 and/or M2 marker CD206. Immunohistochemistry demonstrated that some CD44+ cells at these areas co-expressed CD86 (Figure 4K,L,M,N,O) and CD206 (Figure 4P,Q,R,S,T). 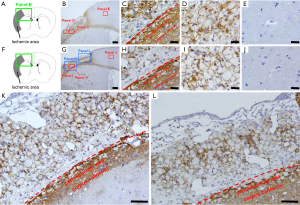 This study demonstrates that CD44 is expressed in not only stem cells but also stem cell niches such as microglia/macrophages following stroke. We found that CD44 is expressed in neural lineages, including astrocytes as well as NSPCs, in ischemic areas. Although the precise origin of CD44+ astrocytes remains unclear, we previously demonstrated that NSCPs isolated from ischemic areas differentiate into various neural cells, including glial cells (40). Thus, it is possible that CD44+ NSPCs are origin of CD44+ glial cells. However, the precise relationships between CD44+ NSPCs and CD44+ glia need clarification; this will be a focus of our future studies.

Under neuroinflammatory conditions, such as after ischemic stroke, it is well-documented that microglia/macrophages accumulate in the brain (50,52). It has also been reported that brain microglia/macrophages originate from progenitors in the embryonic yolk sac and that they reside in the brain until adulthood under normal conditions (53). Although the precise origin of CD44+ microglia/macrophages under pathological conditions remains unclear, our previous studies (22) and those of others (54,55) demonstrate that activated microglia are, in part, derived from brain pericytes. However, contrary to these finding, it has also been reported that a subset of pericytes originate from hematopoietic lineages, including microglia (56,57). In this study, we found CD44 in ischemic areas was expressed in some CD45+ hematopoietic lineages. As CD44 is also expressed in hematopoietic cells during early CNS development (58), some CD44+ cells observed in ischemic areas may have the features of immature hematopoietic cells. However, the precise relationship between CD44+/CD45− pericytes and CD44+/CD45+ hematopoietic lineage cells in ischemic areas needs to be clarified in further studies.

In this study, we found that many CD44+ cells emerge in ischemic areas, while CD44+ cells are rarely observed in the MCA cells of sham-operated mice. The precise mechanism by which CD44 is selectively enhanced in cells at these areas remains unclear. However, previous studies demonstrate that CD44 expression is up-regulated in microglia/macrophages after brain injuries, including ischemic stroke (3,59,60), and that CD44 expression is regulated by various cytokines and/or molecules (61,62). This suggests that CD44 can be induced in cells stimulated by several mechanisms, including hypoxia and cytokine production.

Although the precise role of CD44 under ischemic conditions remains unclear, a previous study indicates that CD44-deficiencient mice have lower levels of pro-inflammatory cytokines after ischemic stroke, resulting in a reduction of ischemic areas, and improved neurological deficits when compared with wild-type control mice (3). These findings suggest that CD44 may function as a negative regulator during ischemic stroke; presumably through an increase of pro-inflammatory cytokines. In contrast to these findings, CD44 deficient mice displayed increased inflammatory responses during experimental autoimmune encephalomyelitis (EAE) when compared to wild-type control mice (63), suggesting that CD44 exerts anti-inflammatory effects. We do not understand the discrepancy of why CD44 displays diverse roles in CD44-deficient mice under neuroinflammatory conditions (e.g., ischemic stroke and EAE). However, our current study indicates that CD44 is expressed in activated microglia/macrophages with two different phenotypes, known as pro-inflammatory M1 and anti-inflammatory M2 types. Thus, the different results obtained in previous studies regarding CD44-deficient mice may be attributable to the diverse effects of CD44 in microglia/macrophages.

In addition to CD44, the ligands of CD44, such as hyaluronic acid (HA) (64) and osteopontin (OPN) (65), play important roles in the reparative process after injury. Although the precise function of CD44 as a receptor for HA remains unclear, multiple reports demonstrate that implantation of HA scaffolds has various positive effects on CNS regeneration, in part through inhibition of glial scar formation (66-68). OPN is a glycoprotein that was originally purified from bone. However, OPN is expressed in various types of cells, including macrophages (69,70). Thus, it is possible that CD44+ microglia/macrophages also secrete OPN following ischemic stroke. Furthermore, it has been reported that CD44-OPN signaling promotes the proliferation of CNS stem cells, including NSPCs (71,72), neuronal differentiation (72), and axon growth (73). Although the precious roles of microglia/macrophages in during brain pathologies are still unclear, microglia/macrophages are known to have important roles in stem cell niches (37,38). Thus, CD44+ microglia/macrophages may alter the fates of CD44+ stem cells, such as NSPCs and/or iSCs, following ischemic stroke; thereby regulating the neural reparative processes during brain injuries. However, the precise relationship between CD44+ stem cells and CD44+ microglia/macrophages in stem cell niches needs to be elucidated by future studies.

In conclusion, we demonstrated that CD44 is expressed, not only stem cells, but also in niche microglia/macrophages following ischemic stroke, suggesting that CD44 plays important roles during reparative processes under neuroinflammatory conditions. However, the precise traits and roles of CD44+ cells in during brain pathologies require further studies.

We would like to thank A. Narita for technical assistance.

Funding: This work was partially supported by Grant-in-Aid for researchers, Hyogo College of Medicine (2018; to A Nakano-Doi).

Conflicts of Interest: Takayuki Nakagomi serves as the unpaid Editorial Board Member of Stem Cell Investigation. Department of Therapeutic Progress in Brain Diseases is financially supported by Daiichi Sankyo Co., Ltd., Nippon Zoki Pharmaceutical Co., Ltd., and CLEA Japan, Inc. The sponsors had no roles in this study, including those of study design, data collection, data analysis, data interpretation, and manuscript writing. The other authors have no conflicts of interest to declare.

Ethical Statement: The authors are accountable for all aspects of the work in ensuring that questions related to the accuracy or integrity of any part of the work are appropriately investigated and resolved. All experimental procedures were approved by the Animal Care Committee of the Hyogo College of Medicine (License number: 17-051, 18-061). All procedure performed in this study involving animal experiments were in accordance with the ethical standards as described in the methods sections.