Cutaneous metastasis as an initial presentation of lung adenocarcinoma with KRAS mutation: a case report and literature review

The skin is an uncommon metastatic site of internal malignancies. Generally, cutaneous metastasis develops after initial diagnosis of the primary internal malignancy and late in the course of the disease. In very rare cases, cutaneous metastasis may occur at the same time or before the primary cancer has been detected (1). In a large review by Lookingbill et al. (2) including 7,316 cancer patients, skin involvement as a presenting sign was seen in only 0.8%. Being the first sign of presentation, cutaneous metastasis can often be biopsied to help find the primary cancer. Among the cutaneous metastatic cancers, lung is the most common primary site (24%) of underlying malignancy in men, and the fourth most common primary site (4%) in women (1). The presentation of cutaneous metastasis in lung cancer portends a poor prognosis with an average survival ranging between three and five months in the majority of studies (3-5). In this report, we describe an unusual case of KRAS-mutant lung adenocarcinoma metastasizing to skin followed by multiple internal lymphadenopathies and profuse pericardial and pleural effusions that clinically mimicked a lymphoma at the time of initial diagnosis.

A 61-year-old male, non-smoker, who had worked as a coal-fired industrial boiler operator, was transferred to our hospital for dyspnea and pericardial effusion. Three months before admission, the patient had noticed a firm, painless, reddish skin lesion that was growing rapidly from a tiny papule to a bean-sized nodule on the left side chest wall, and had shown no improvement after treatment with antibiotics and topical steroids at a private dermatology clinic. The skin nodule continued to grow to a mass over one month period. Later the patient started to suffer from shortness of breath, and found to have significant pericardial effusion and 1.5 L of pericardial fluid was drained at a local hospital. Subsequent whole body PET/CT revealed moderate left pleural effusion and multiple foci of lymphadenopathy in bilateral deep cervical, axillary, supraclavicular, occipital, hilar, paraaortic lymph nodes. The intense uptake of the radiotracer fluorine-18 fluorodeoxyglucose was present within the enlarged lymph nodes and in the left chest wall skin mass (Figure 1). The patient was given a suspected diagnosis as lymphoma and was transferred to our tertiary care center. On admission, his condition deteriorated with worsening dyspnea at rest, which was not associated with fever, chills, cough, chest pain, orthopnea, or edema on lower extremities. The patient reported 20 pounds unintentional weight loss over two months with poor appetite. Cutaneous examination showed sharply demarcated, dark red, cauliflower-like mass measuring 11 cm × 4.5 cm in diameter and protruding 3 cm above the left side anterior chest wall, accompanied by sanguineous exudation. The adjacent skin contained signs of inflammation with erythema (Figure 2A). A biopsy of the skin mass was performed and revealed metastatic adenocarcinoma of lung origin (Figure 2B) with diffuse strong nuclear staining for thyroid transcription factor 1 (TTF-1) (Figure 2C) and membranous staining for cytokeratin 7 (CK7) (Figure 2D) as well as the negative staining to cytokeratin 20 (CK20), CDX2 and p63 which are the markers for colon cancer and for squamous carcinoma. KRAS mutation was detected in codon 12, which also points towards a metastatic adenocarcinoma of lung origin. EGFR and ALK mutation testing were negative. The patient underwent an echocardiogram which showed a large posterior pericardial effusion with echocardiographic evidence of right ventricular collapse. Pericardial window was made emergently through a left video-assisted thoracoscopic surgery (VATS) for drainage of his pericardial effusion. Pleural and pericardial effusions were evacuated and sent for cytology. Malignant cells with positive immunostain of TTF-1 were found in both pleural fluid and pericardial fluid, which further confirmed metastatic adenocarcinoma from lung origin. Given the diagnosis of stage IV lung adenocarcinoma with multiple distant metastases, the patient received palliative chemotherapy (carboplatin + paclitaxel) for two cycles. Unfortunately, there were no improvements on either the cutaneous metastatic mass or his general condition. 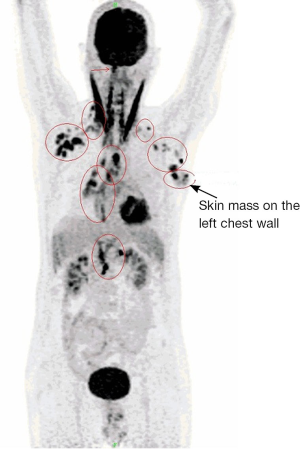 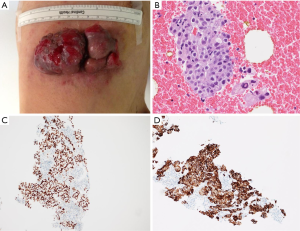 Cutaneous metastasis can manifest as a nodule, ulceration, cellulitis-like lesion, bullae or fibrotic process. Generally, the nodular type is the result of hematogenous metastasis, and is likely to be the most common. Nodules are painless, mobile or fixed, firm or rubbery, discrete or multiple. They vary in color from flesh tones to red-purple, or blue-black and vary in diameter from 5 mm to 6 cm (8). Multiple lesions are usually grouped. They initially grow rapidly, and then more slowly, and may necrotize or ulcerate (9). The regional distribution of the cutaneous metastasis, although not always predictable, is related to the location of the primary malignancy and the mechanism of metastatic spread. The relative frequency of cutaneous metastasis correlates with the type of primary cancer, which occurs in each sex. For instance, lung and breast carcinomas are the most common primaries that send cutaneous metastasis in men and women, respectively. The head and neck region and the anterior chest are the areas of greatest predilection in men. The anterior chest wall and the abdomen are the most commonly involved sites in women (6). While certain cancer types are characterized by random distribution for cutaneous metastasis (liver cancer), a number of cancers demonstrate a colonization preference to the region of origin: lung cancer to the supradiaphragmatic (mostly chest) and colorectal cancers to the infradiaphragmatic (abdominal) skin regions. In certain cases, however, cutaneous metastasis develops more frequently at specific distant locations, as evidenced by the dissemination of renal cancer to the head and neck region (10). These findings are clinically relevant and useful especially in patients where cutaneous metastasis is the first indication of a malignancy. The cutaneous metastasis observed in our case located on the chest wall. It was a solitary nodular type and grew rapidly to an unusual big size associated with necrotizing and ulceration.

Physically, cutaneous metastatic lesions due to lung cancer are indistinguishable from those due to carcinoma originating elsewhere in the body. A strong and diffuse nuclear expression of TTF-1 immunostain is characteristic of primary lung cancer and thyroid carcinoma, which is helpful for identifying the histological origin of primary cancer. Mutually exclusive to EGFR and ALK mutations, KRAS mutants are detected mainly in adenocarcinomas, and show association with progressive disease status. Given the positive expression of TTF-1 and KRAS mutation detected in our patient’s cutaneous metastasis, we further confirmed the primary malignancy as lung adenocarcinoma. However, thus far the relationship between the histological type of lung cancer and the occurrence of cutaneous metastasis has not been well-defined. Schoenlaub et al. (11) demonstrated that lung large cell carcinoma had the greatest tendency to metastasize to the skin and lung squamous cell carcinoma the least. On the contrary, lung adenocarcinoma had the greatest tendency and lung large cell carcinoma the least in Hidaka’s report (12). So far, we have not found any reports regarding gene mutation analysis in lung cancer patients with cutaneous metastatic lesions. Therefore, this is the first case report to show that KRAS-mutant lung adenocarcinoma can be associated with cutaneous metastasis.

Lung cancer patients with cutaneous metastasis are not likely to be cured. Such metastasis signifies a fast-growing aggressive primary lung carcinoma. These patients have an extremely poor prognosis with an average survival ranging between three and five months in the majority of studies (3-5). Generally, therefore, only palliative chemotherapy is offered. Radiation therapy to the cutaneous metastasis is indicated if associated with severe pain or bleeding. Tyrosine kinase inhibitors (TKIs) have been in use as cancer therapeutics for nearly a decade, and their utility in targeting specific malignancies with defined genetic lesions has proven to be remarkably effective. Recent efforts to characterize the spectrum of genetic lesions found in NSCLC have provided important insights into the molecular basis of this disease and have also revealed a wide array of tyrosine kinases that might be effectively targeted for rationally designed therapies. Even though KRAS mutations were identified in NSCLC tumors more than 20 years ago, we have only just begun to appreciate the clinical value of determining KRAS tumor status. KRAS mutations occur more frequently in lung adenocarcinomas (approximately 30%) and less frequently in the squamous cell carcinomas (approximately 5%) (13). KRAS mutation is a poor prognostic factor. Recent studies indicate that patients with mutant KRAS tumors fail to benefit from adjuvant chemotherapy and do not respond to EGFR inhibitors. Activating mutations in EGFR gene are both prognostic and predictive in that they are associated with improved survival, irrespective of therapy, and are associated with a significant response to EGFR TKI such as gefitinib or erlotinib (14,15). Patients with EGFR mutations also show a significant improvement in progression-free survival (PFS) compared to standard chemotherapy (16). This discovery has dramatically changed the clinical treatment of lung cancer in that it almost doubled the duration of survival for lung cancer patients with an EGFR mutation. More recently, fusions involving ALK gene were discovered in NSCLC (17). Patients with ALK gene rearrangements demonstrate significant objective response rates and PFS times to the oral ALK inhibitor crizotinib (18). The prognostic significance of ALK is somewhat unclear. Our patient did not receive these targeted therapies due to a lack of mutations in EGFR and ALK. He also did not respond to the chemotherapy with carboplatin and paclitaxel.

We have reported the first case of KRAS-mutant lung adenocarcinoma with remarkable cutaneous metastasis and rapid progression who did not respond to chemotherapy. Since KRAS mutations do not currently predict for benefit from targeted drugs and are associated with a worse survival, there is a clear need for therapies specifically developed for patients with KRAS-mutant NSCLC.

Written informed consent was obtained from the patient for publication of this case report and accompanying images.