Mesenchymal stem cells (MSCs) have been used in various clinical trials, and most have showed promising results (1-4). We have developed a simple washing, isolation and propagation protocol to produce adipose tissue derived (AT) MSC using platelet lysate supplementation (5,6). Sometimes our AT-MSC culture grows a little faster or slower than usual, so that harvest time does not match with the time when the cells are needed. Moreover, sometimes cell therapy schedule is postponed due to various causes such as: the patient or cell therapy facility is not ready, while cells in culture are already confluent and should be harvested. If confluent cells are not harvested and kept in culture, they will be over confluent. The cells in over confluent culture either tend to differentiate so that they are not stem cells anymore, or undergo aging so that they are not effective in cell therapy (7). Therefore, proliferation of MSCs in ready to harvest culture should be halted by “cell pausing” method, so that they do not increase in number and do not experience senescence. Various methods of cell pausing were applied to prevent proliferation of some cell lines (8), and stem cells, which either required special medium (9,10), using complicated encapsulation method (11), or using special flask (Petaka G3) (12). Therefore this study aimed to develop an easy and economical method of MSC pausing method for our AT- MSCs using ordinary basal medium and flask that yielded AT-MSCs, which were compliant with the requirements of International society for cell therapy (ISCT) (13).

The sample was cryopreserved AT-MSCs (P3) that was stored in SCTE-IMERI. The sample was thawed and cultured in three ordinary T75 flasks until a sufficient number was achieved. Harvested cells were checked for their surface markers, and differentiation potentials, to ensure they meet ISCT guidelines (13). The harvested cells were seeded in four Petaka G3 flasks (double sided, 375,000 cells per side, and 24 mL complete medium), and 20 ordinary T75 flasks (375,000 cells per flask and 10 mL complete medium). The flasks were cultured at 37 °C and 5% CO2, until 70–80% confluent. Then, two Petaka G3 and ten ordinary T75 flasks were put in ±4 °C, and the rest at room temperature (±24 °C).

Data collected were harvested cell number and viability before and after washing, percentage of CC73, CD90, CD105, and lineage negative, and differentiation potential. The data were presented descriptively as means and standard deviations in graphs. In addition, the time to reach 70–80% confluent culture for cell pausing at 4 °C and room temperature, in T75 and Petaka G3 flasks was noted, and presented descriptively as means and standard deviations.

The whole process of cell seeding, culturing and harvesting in T75 was much easier compared to Petaka G3 flasks. The pH of supernatant was more or less stable (Table 1). The cells at day three to seven at cell pausing in T75 as well as Petaka G3 flasks at room temperature showed normal attached spindle shaped morphology, while those at 4 °C showed rounded morphology, and some detached cells were observed at Petaka G3 flasks (Figure 1). 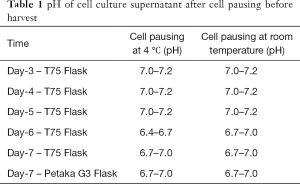 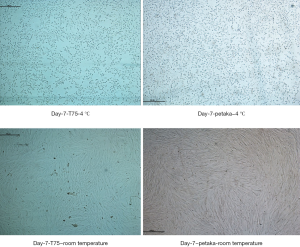 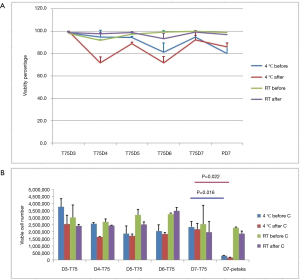 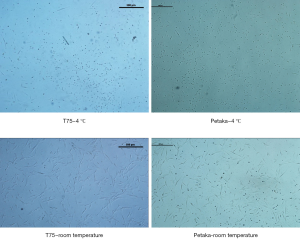 Cell viability percentages dropped the most after centrifugation after cell pausing at 4 °C, but the percentages were still higher than 70% (Figure 2A), thus still could meet the criteria of FDA for cell therapy (16). However, in this study viability was assessed by trypan blue exclusion method, which was the limitation of our study, as trypan blue only distinguished viable from dead cells, and not from cells that were in the process of dying (early apoptosis) (17). This fact had an impact on functional cell number in cell pausing at 4 °C, which were showed by rounded cell morphology (Figure 1), longer time that was needed to reach 70–80% confluent after cell pausing at day-5 onward (Figure 5), and fewer cell attachments when cell pausing at 4 °C was harvested and re-cultured (Figure 6).

In this study, cell viability in MSC cell pausing at 4 °C in both T75 and Petaka G3 flasks could be maintain above 70% until day-7, which was better compared to storage of harvested cells at 4 °C (18,19). A study on harvested AT-MSC storage at 4 °C showed that storage in physiologic saline and basal medium only could preserve the viability for two days and one day respectively (18). Another study on harvested umbilical cord (UC)-MSC storage at 4 °C showed that storage in high glucose basal medium and physiologic saline could preserve viability for four days, while phosphate buffered saline could preserve viability for three days (19).

In term of cell characteristics, our study showed that CD73, and CD90 could meet the criteria of ISCT for both cell pausing at 4 °C and room temperature, using T75 and Petaka G3 flasks. However, CD105 was reduced gradually during cell pausing at room temperature, while at 4 °C CD105 showed inconsistent pattern of reduction in T75 flasks, where at day-4, CD105 was 80.1% (Figure 3). Cell pausing at 4 °C day-7 showed that CD105 percentage in Petaka G3 was greatly reduced, but was higher than in T75 flask.

Decrease in CD105 (endoglin) cell population is often link to decrease in chondrogenic differentiation potential, however a recent study showed that CD105 expression on MSCs did not predict their chondrogenic differentiation potential (20), which was similar to our result. In addition, decrease in CD105 cell population was apparently not because of the use of different culture flaks (T75 or Petaka G3). It was rather caused by the depletion of serum in the medium during cell pausing (21), as in this study there was no medium change before cell pausing. Moreover, decrease in CD105 might influence the capacity of MSCs to promote vascular dependent cell/tissue regeneration, such as regeneration of cardiac muscle (21), as CD105 has a role in angiogenesis, but decrease in CD105 population might be overcome by adding TGFβ in the medium and culturing in hypoxic condition (21). Changes in the characteristic of cells provide an insight that during cell pausing, modifications of culture medium by adding certain factors need to be conducted in the future, which depend on the intended application of the MSCs.

At room temperature CD negative percentage was significantly lower in Petaka G3 compared to T75 flasks (P=0.042) (Figure 4). However, both percentages were below 2%, thus still met the requirement for cell therapy that was set by ISCT (13).

Cell pausing at room temperature showed that T75 and Petaka G3 flasks gave comparable results in cell morphology, cell viability percentage, viable cell number yield, cell characteristics, and differentiation and attachment capacity. Therefore, cell pausing using T75 is preferable to Petaka G3 due to its easy handling as well as from economical point of view. Therefore this method will very useful in cell therapy, where cells are ready for harvest while patients or cell application facility is not ready or when the cells need to be transported to remote areas that need a certain time to arrive at application site. However, the slim shape of Petaka G3 flasks is more convenient for storage and sending to remote areas, and may provide lower sending cost compared to sending bulky T75 flasks.

In conclusion, the results of cell pausing at room temperature using fully filled and sealed ordinary flasks were comparable to Petaka G3 flasks.

Funding: This study was funded by a research grant from the Ministry of Research, Technology and Higher Education of the Republic of Indonesia, Hibah Penelitian Pengembangan 2019, contract no.NKB-1804/UN2.R3.1/HKP.05.00/2019. The authors would like to gratefully acknowledge Mr. Aaron Huebner from Celartia Ltd, who gave the Petaka G3 flasks for this study.

Ethical Statement: The authors are accountable for all aspects of the work in ensuring that questions related to the accuracy or integrity of any part of the work are appropriately investigated and resolved. This study got ethical approval from Ethics Committee Faculty of Medicine Universitas Indonesia (No. ND-609/UN2.F1/ETIK/PPM.00.02/2019).