Telomere shortening as a hallmark of stem cell senescence

Aging can be identified as a complex process that cause structural changes in microscopic and macroscopic levels. In the other word, aging is progressive reduction in normal tissue function and a deficient response to injury (1). Concerning the cause of aging has been great attention throughout human life. Several hallmarks of aging (e.g., epigenetic alteration, telomere shortening, mitochondrial dysfunction, stem cell exhaustion and cellular senescence) have been indicated as major participants to cellular aging (2). Also, aging has been defined as the primary risk factor for the progression and development of specified diseases, including cardiovascular disorders, diabetes, cancer, Alzheimer, Parkinson, etc. (3). Mesenchymal stem cells (MSCs) have generated attention as a high potential source for cell-based therapeutic strategies owing to their exceptional properties such as, self-renewal, multi-lineage differentiation and proliferative capacity (4,5). Additionally, MSCs are contributed to the maintenance of tissue regeneration and homeostasis. Aa a result, the qualitative and quantitative decrease in stem cell function during the process of aging, known as stem cell exhaustion, has been specified as one of the promoters of aging (3,6). The role of telomere loss in the replicative senescence of stem cells has recently been the focus of considerable interest. At this time, there is increasing evidence that signaling pathways are mostly associated with aging. In accordance with these explanations, determining the signaling pathways and mechanisms of stem cell senescence will be critical for immediately understanding the aging process and for developing novel strategies to improve and treat age-related diseases. In the other word, this review focuses on prevalent knowledge of the experimental investigations about the telomere shortening as critical mechanism in aging of stem cells. It may be a critical phase both for realizing their potential role in stem cell senescence and for finding suitable technologies in regenerative medicine. For this purpose, at first, we will point out the history of telomere, in the following talk about telomere length regulation and telomere maintenance in stem cells.

Prior knowledge and the discovery of telomere

Interest in telomere was first shined by Muller and McClintock in 1930 as a protective sequence repeat at the end of the chromosome (7). These researchers noticed that chromosomes lacking end parts became sticky and they often fused to each other. At that time, the internal structure of the chromosome is yet to be assessed and researchers knew that telomeres as the end of the chromosome can protect it from degradation, but the detail were not clear (7). In the following in 1973, “Theory of Myringotomy” has been proposed by Olovnikov. This theory explains the limitation of the cell population doubling time in normal somatic cells and telomere shortening was considered as senescence indication (8). Then, Hayflick theorized that human cells have a limited life span and in this way, the limit theory was formed in 1980 (9). On the same path, Elizabeth Blackburn indicated that the molecular structure of telomeres of Tetrahymena pyriformis has a rich of thymine (T) and guanine (G) nucleotides and subsequently she and her colleagues succeeded in extracting telomerase enzyme in 1984 (10). They found that the telomerase enzyme as the novel telomere transferase, is involved in the addition of telomeric sequence repeats for the replication of chromosome ends in eukaryotes and responsible for the renewal of the telomeres.

Telomere, the ends of mammalian chromosomal DNA, is the G-rich sequences that protect the end of the chromosome from damage and degradation. In the other words, the telomere is a structure that plays critical roles in regulating genomic integrity, chromosome stability and other aspects of cell physiology (11). This specific region, repetitive TTAGGG sequences, are linked to shelterin complex, as essential complex for telomere integrity, and telomere length regulation (12). The shelterin complex consists of six protein subunits including, TRF1 (telomeric repeat binding factor-1), TRF2, POT1 (protection of telomeres protein-1), TIN2 (TRF1-interacting protein-2), RAP1 (repressor/activator protein 1) and TPP1 (TIN2- and POT1-interacting protein) (13) (Figure 1). Each of these proteins has a unique role in the regulation of telomere length as listed in Table 1 (14,15). Telomerase, a ribonucleoprotein with reverse transcriptase activity, is responsible for telomere length regulation. Telomerase as a specific DNA polymerase enzyme, is a ribonucleoprotein complex that consists of two parts, TERT (telomerase reverse transcriptase) as the central part and TERC (telomerase RNA component) as the accessory part. It seems that this enzyme to be gathered in sound collection, where the RNA component (TERC) and its protein component (TERT) get together to form the enzymatic ribonucleoprotein complex (16). Another subordinate component of this protein is dyskerin, NHP2, NOP10 and GAR1. The telomere length regulation by telomerase occurs in a multi-stage process as explained below. At first, nucleotides present at the end of the 3' end DNA telomeres form a hybrid with the RNA component of the telomerase enzyme. In the following part of this process, the created gap at the end of leading strand is filled and in final, the newly synthesized strand moves in the direction of 5', allowing the creation of a new gap and this cycle is repeated (15,17). The regulation of telomere length is done via the S phase of the cell cycle progression.

Shortening of telomere length as a hallmark of cellular senescence

One of the most important theories about aging is telomere theory, which is the based on the mechanisms of telomeres shortening and demonstrates telomeres as a rather elegant biomarker of cellular aging (18). Based on the telomere theory, it was indicated that aging is irreversible, programmed cell cycle arrest happens in response to the telomerase activity and the total number of cell divisions cannot exceed a particular limit termed the Hay flick limit as mentioned above (18). In addition to the telomere theory, another theory is the mitochondrial theory (or theory of oxidative stress) which compete with theory of telomere (18).

As reported in in one previous study, telomerase activity and telomere length maintenance are related with immortality of tumor cells, embryonic stem cells and germ-line cells (Figure 2) (17). In the other word, this activity causes to prevents the replication-dependent cellular senescence and loss of telomere length in highly proliferative cells including the majority of tumor cells and germ-line cells (19). In most somatic cells except keratinocytes, activated lymphocytes and stem cells, telomerase activity is reduced after birth, afterwards the telomere length gradually shortens with each cell replication, eventually leads to cell senescence of cells. Among the cells, stem cells with multi-lineage differentiation potential and self-renewal capacity have rapid cell expansion, thus they should have a mechanism that maintains telomere length during cell replication (20). On the other hand, in 2007 Hiyama and Hiyama reported that in hematopoietic and non-hematopoietic stem cells (HSCs) derived mammary epithelial, kidney, skin, pancreas tissues and MSCs low levels of telomerase activity have been detected (20). Because of stem and progenitor cells play a significant role in homeostasis and tissue repair, senescence of these cells is considered as an important factor in the aging process. So, understanding the mechanisms involved in aging of these cells is noticeable for researchers. 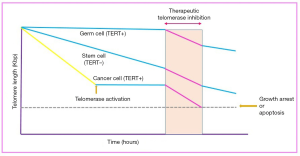 Telomere and telomerase dynamics in HSCs

According to previous reports, telomerase activity almost is diminished in most somatic cells such as skin, hair follicle, intestinal crypt, neuronal, pancreatic, liver epithelial, etc. Against telomerase activity, in in vitro experiments, age-dependent loss of telomeric DNA has been observed in lymphocytes, leucocytes and neutrophils like HSCs. Previous studies showed that in CD34+ cells derived different sources, the telomerase activity has been significantly increased after the cell passaging (21). Telomerase activity measurement by PCR-TRAP assay showed that the expansion of CD34+ cells significantly depends on increasing the telomerase expression that is responsible for telomere length regulation (22). In one study, Vaziri et al. [1994] reported that BM-HSCs had shorter telomeres length than the umbilical cord and fetal embryo liver derived-HSCs. This finding suggested the hypothesis that a progressive decline in telomere length with age occurs in HSCs (23). It was indicated that transplanted HSCs derived from aged donors restricts clinical applications in cell therapy (24). Low levels of telomerase activity can be detected in HSCs and in some differentiated progenitor cells including blood lymphocytes (25). Collecting data supported this hypothesis that replication potential of HSCs could be limited by progressive telomere shortening. In the other word, telomere length can be used as an indicator of stem cell proliferative potential. Telomerase activity appears to increase in response to cytokines secreted by HSCs and progressively decreased by HSCs differentiated cells with aging development (26). These finding propose that one of the most important function of telomerase in HSCs is to prevent critical shortening of telomeres that responsible for telomere function (27).

As we know, stem cells which can be derived from different tissue such as bone marrow, adipose, liver, dental pulp, etc. are commonly named MSCs (28,29). These cells could differentiate into various cell type such as, osteocytes, adipocytes, endothelial cells, chondrocytes, etc. (30,31). The replicative senescence in MSCs are various in different species. For example, it has been reported that MSCs from human and mouse could be expanded for 40–50 passages (nearly 100 population doublings) (32). One study also shown that in hMSCs telomerase activity was undetectable or partially detectable and telomere length gradually shortened at a similar rate (33). However, it was demonstrated that cytokines, growth factors and some antioxidants could induce the mitotic potential of hMSCs. Yanada et al. [2006] reported that growth factors such as bFGF could affect the telomere length maintenance of bone marrow-derived MSCs without upregulation of telomerase activity and hTERT gene expression (34). In studies by Farahzadi et al. [2016] and Mobarak et al. [2017], it was demonstrated that L-carnitine as an internal antioxidant would be a good factor to improve the lifespan of the aged human adipose tissue-derived MSCs due to over-expression of hTERT gene and lengthening of the telomeres (35,36). In another study by the same group, it was indicated that ZnSO4 as a suitable antioxidant could increase the telomerase activity as well as telomere length and it could potentially be used for enhancing the application of aged-hMSCs (37). Also, Pirmoradi et al. [2018] showed that curcumin as a strong antioxidant and a free radical scavenger could improve lifespan of rat adipose tissue-derived MSCs through promoting TERT gene expression (38). Generally, no hTERT gene expression and telomerase activity has been detected in hMSCs, and there may be an alternative mechanism of telomere maintenance other than telomerase (20).

Telomeres as the major determinant of the onset of replicative senescence, are composed of G rich nucleotide (TTAGGG)n sequence that protect chromosome ends against degradation and illegitimate recombination. Shortening of telomere length can occur in cells tolerating DNA damage, cells with improper nuclease activity, actively proliferating cells and individually in those lacking functional telomerases. Significant telomere shortening leads to the activation of DNA damage and apoptotic signaling pathways, which induces senescence and cell cycle arrest (39). The total information obtained from recent researches shows that epigenetic modifications induction and change in promoter methylation as well as alteration of gene silencing near the telomere are consequences of telomere attrition. Summarizing experimental and theoretical data, we can conclude that among biomarkers of cellular senescence the telomere shortening is considered hallmarks of aging.

Funding: This study was supported by a grant of Research Vice-Chancellor of Tabriz University of Medical Sciences, Tabriz, Iran (Grant No. IR.TBZMED.REC.1396.849).