Organoids are three-dimensional (3D) tissue-like constructs that differentiate from stem cell-derived, self-assembled embryoid bodies to closely resemble the complex environment, architecture, and function of the native tissue. The cellular microenvironment produced by organoids vastly outclasses the capacity of a standard 2D cell culture plate to simulate the intricacies of living biological systems. With striking similarity to complex living tissues in terms of organization, orientation, and behavior of the constituent heterogeneous cell types, stem cell-derived organoids represent the cutting-edge technology in in vitro biology. A flurry of recent publications detailing ever-improving methodologies and applications for organoids, including those from patient-derived induced pluripotent stem cells (iPSCs), herald an exciting new frontier of human disease research and personalized medicine.

In the context of this editorial, a bioreactor is defined as a dynamic 3D cell culture platform for a variety of distinct biomedical applications, such as: expansion of diverse cell types including PSCs, generation of 3D organoids from PSCs, and tissue-specific differentiation of stem cell-derived organoids (1). Bioreactors appear to offer a better venue for maintenance and differentiation of organoids because of the flow of media around the cells. This dynamic process provides an improved exchange of media at the surface of the organoid, ensuring higher mass-transfer and more physiologically relevant gradients of nutrients and waste products between the surface and the core (2,3). This gradient enables correct orientation and lamination of different cell phenotypes during differentiation by more closely mimicking the natural developmental environment (4,5). Furthermore, the shear imparted by flowing media can induce mechanotransducive responses from cells, leading to better structural and transcriptional outcomes (6). The complex environments provided by bioreactors can permit optimized conditions for the formation of embryoid bodies and their subsequent differentiation into mature tissues (7). During differentiation, individual tissue types might have distinctive requirements for growth factors, nutrient exchange, shear forces, volumes, and proximity to other cells. To address such an extensive diversity, a multitude of bioreactor classes with unique functionalities have been designed for organoid generation and maintenance (Figure 1). Each form of bioreactor possesses discrete advantages and disadvantages, as illustrated in Table 1. 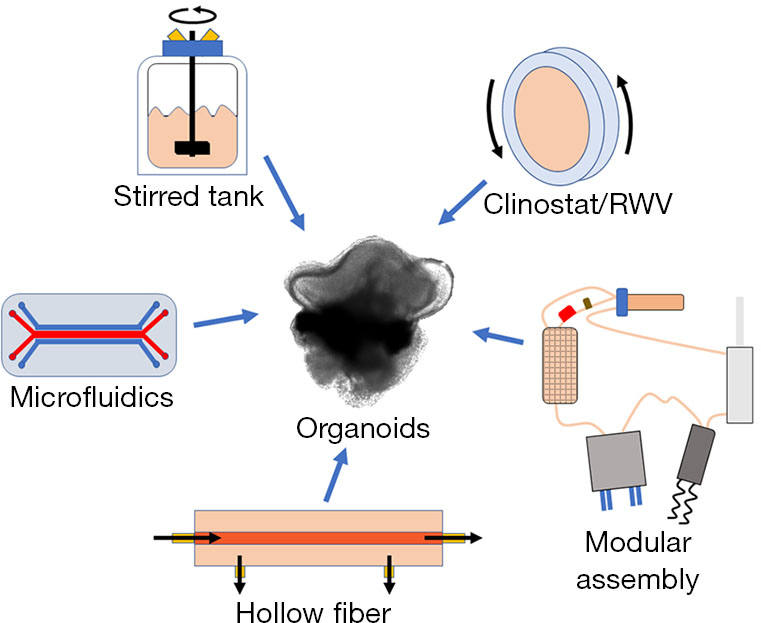 A relatively popular bioreactor system for organoid culture is the rotating wall vessel (RWV) or clinostat bioreactor. The RWV bioreactor, initially designed by NASA to simulate certain aspects of microgravity, functions by optimally suspending organoids in a low-turbulence environment that rotates horizontally with the fluid-filled bioreactor as a “solid-body” (8). Minor perturbations to the path of travel provide high mass-transfer under extremely low-shear conditions. A continuously-perfused RWV bioreactor was utilized to improve the rate of proliferation, cell-specific differentiation, and overall organization of murine retinal organoids (9). This study demonstrated that organoids in the RWV reached the same level of maturation in 25 days (9) compared with 32 days in a static culture (10). Additionally, organoids cultured in the RWV bioreactor had better differentiation of ganglion cells and S-cone photoreceptors, closely recapitulating a native retina. Further validating the significance of bioreactors, another report showed how culture in a stirred-tank bioreactor improved lamination and photoreceptor yield in human retinal organoids (11). The stirred-tank bioreactor employs a spinning propeller to suspend organoids in vigorously mixed media, exchanging higher shear for better nutrient exchange versus the RWV. In a live retina, phototransduction, the process of light being converted into electrical signals, occurs in the outer segment. A significantly higher proportion of photoreceptor cells in organoids produced in the stirred-tank bioreactor seemed to possess outer segments compared with those grown in static culture.

The improved organization and behavior of cells in bioreactor-cultured retinal organoids was evident in several recent studies involving an array of tissue types (12,13). However, many modern bioreactors are quite large; their prolonged used is frequently cost-prohibitive, potentially consuming liters of expensive growth factor-containing medium during a single experiment. A traditional perfusion RWV and a stirred-tank bioreactor may each hold up to 100 mL. The entirety of the media may need to be changed between each stage of differentiation, rapidly escalating the cost. Additionally, bioreactors are often not purpose-built for specific organ-type applications and are frequently skill- and experience- limiting. Until recently, researchers had endeavored to optimize bioreactors for 3D tissue culture (14,15) but were limited due to availability of differentiation protocols and advanced fabrication techniques. In the new era of 3D printing and mass customization, new generations of bioreactors are being developed that offer optimized organoid culture at reduced cost and improved reproducibility.

A prime example of this trend was implemented in a novel 3D-printed bioreactor assembly that is capable of converting each well of a standard 12-well tissue culture plate into a miniaturized, stirred-flask bioreactor (16). The abilities of the new bioreactor, named SpinΩ, were exemplified through the generation of human iPSC-derived, brain-region specific organoids. Purpose-built for low volumes, the SpinΩ possesses novel 3-fin vanes capable of continuously suspending organoids in just 3 mL of media each. These organoids exhibited a similar distribution of cell types and structures as the traditional protocols but with improved consistency. This or similar low-volume, multi-well setups provide a glimpse of the wide-range of options possible through customization and should be ideal for high-throughput applications of organoid research.

Notably, the customization is not limited to stirred-tank bioreactors. Another recent report described a modified microfluidics chip, which affixed neural organoids adjacent to media-perfusing channels for high mass transfer (17). This device enables the growth of organoids under extremely controlled, very low media volume conditions and confers similar benefits to differentiation and gene expression as those described above. As another example for innovative miniaturized bioreactors, a calcium alginate hollow fiber was used to produce very large human brain organoids, with preferable structural and phenotypic results (18).

The designs of recently-published bioreactors for organoid production vary widely in their form and function, reflecting divergent tissue-specific requirements for organoid generation and for broad and ever-expanding applications. For full capacity of customized bioreactors to be realized, stem cell biologists and engineers will need to continue developing an array of new systems. The next generation of cell culture bioreactors will require more rigorous consistency and lower cost, in addition to introducing novel designs relevant to developmental biology. Such alterations may include manipulations of oxygen concentrations, asymmetric growth factor treatments, and systematic incorporation of extracellular matrix proteins or mature cell types such as endothelial cells. With the intensity of interest in organoid research, cost reduction and customization are inevitable to propel organoids to the same level of prominence, ubiquity, and reproducibility as basic 2D cell culture systems.

We thank Holly Chen for providing the retina organoid picture.