All living organisms respond to changing environmental conditions, as well as to predictable cyclic conditions such as light-dark cycles, high-low tides and summer-winters. To cope with cyclical changing conditions, all organism have evolved ways to deal with the changing conditions, and this requires precise control over gene expression. The circadian cycle is a mechanism that enables animals to perform important functions such as sleep, metabolism, immune function, tissue regeneration, memory formation, differentiation, hormone secretion, blood pressure control, body temperature among others (1-6). It has been shown that light is an important inducer of circadian cycle in animals as well as plants. At the molecular level, the circadian system works due to cyclical expression of transcription factors such as BMAL-1, CLOCK, PERIOD 1–3 (PER1–3), CRPTOCHROME 1–2 (CRY1–2), REV-ERα and REV-ERβ. BMAL-1 and CLOCK form a heterodimer, that activates the transcription of PERIOD, CRYPTOCHROME, REV-ERα and REV-ERβ genes, these in turn lead to repression of BMAL1 and CLOCK genes (3,7). However, PER, CRY, REV-ERα and REV-ERβ proteins have shorter half-life and are destroyed, which relieves the repression of BMAL-1 and CLOCK genes, again the cycle restarts from BMAL1: CLOCK expression, this happens in a cyclical manner (3).

Knockout studies of various circadian genes in mice have helped understand the role of the circadian cycle in normal development. Bmal1 knockout mice are infertile, have impaired glucose regulation, show accelerated ageing, reduced bone and muscle mass (8). Mice with Clock and Period gene knockouts show hyperphagia and diet induced obesity and they also developed various lipid disorders under different dietary conditions (9). Mice with knockout of Clock gene are normal at birth, but they have reduced life span, cataracts and persistent skin inflammation (10). The knockout studies of Cry gene have shown that it plays essential role in maintaining energy homeostasis. Cryptochrome knockout mice studies showed that, these mice have a normal circadian cycle when exposed to a 12-hour light/dark cycle, but the double mutant mice showed increased insulin secretion that leads to excessive adipose tissue deposition (11). Data on mutations in core circadian genes in human diseases is restricted mostly to neuropsychiatric disorders.

Most cells in our body follow a circadian rhythm, whereas in case of transplanted if they do not sync with the host’s circadian rhythm, the graft may not function optimally. Molecular analysis of various circadian genes in different mouse organs such as liver, adrenal gland, brainstem, heart, hypothalamus, showed that circadian gene expression varied widely among the different organs with the highest in mouse liver cells (12) There are several clinical trials involving use of human pluripotent stem cell derived functional cells (13), and it would be important to find out if they can sync their gene expression post transplantation. We studied the expression of circadian genes such as CLOCK, BMAL-1, CRYPTOCHROME and PERIOD in human embryonic stem cells in undifferentiated state and spontaneously differentiated cells; and found that human pluripotent stem cells show cyclical expression of circadian genes.

Human embryonic stem cell line KIND1, was procured from National Institute for Research in Reproductive Health (NIRRH). For culturing KIND 1 cells, culture dishes were coated with 1X Vitronectin (Thermo Scientific, CA, USA) for 1 hour at 37 °C in DPBS and then KIND1 cells were grown in Essential 8 medium (Thermo Scientific). KIND1 cells showing >80% confluency were passaged using 10 mM EDTA (Sigma Aldrich, MO, USA). The undifferentiated cells were harvested at day 4 (at this stage the cells show peak confluency), and subsequently at 6, 18 and 22 hours, with media changes performed daily. To induce differentiation, the undifferentiated cells on day 4 were first given a wash with DPBS and then DMEM containing 10% fetal bovine serum (FBS, Thermo Scientific) was added to the cells. The cells were allowed to differentiate at 37 °C and 5% CO2 humidified atmosphere and harvested at 6, 18 and 22 hours. KIND1 cells were imaged at 10× magnification using brightfield microscope (AxioCam ERc 5s, Carl Zeiss, Germany). The cells were harvested for RNA extraction at 6, 18 and 22 hours, post seeding of undifferentiated cells or post induction of differentiation. 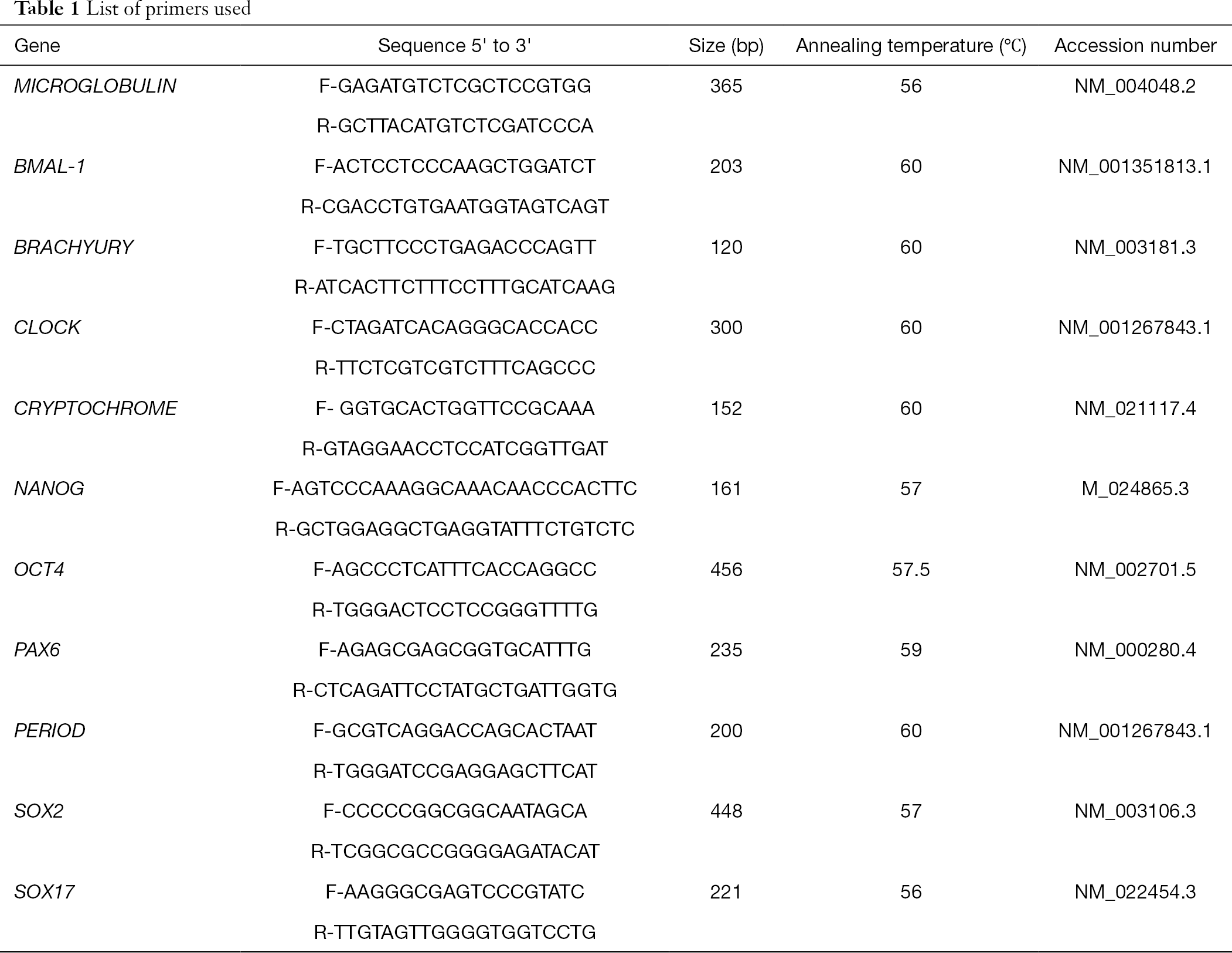 Human embryonic stem cell line KIND1, at 70% confluency was seeded onto vitronectin coated 35-mm dish. At 6 hours the cells attach to the dish as small cell clusters of 3 to 4 cells (Figure 1A), and later the cells possibly undergo one cell cycle (Figure 1B,C). Simultaneously, in another set of 35-mm dishes, KIND1 cells were allowed to reach 70% confluency and at day 4, they were differentiated using DMEM F12 supplemented with 10% FBS. Once the cells are induced to differentiate, they appear flattened and larger at 6, 18 and 22 hours (Figure 1D,E,F). The expression of pluripotency controlling genes OCT4, NANOG and SOX2 was seen using RT-PCR and Figure 2A shows the cells expressed OCT4, NANOG and SOX2, however no expression of lineage specific genes was seen (data not shown) in the cells grown with Essential 8 medium. We chose three representative genes—BRACHYURY, PAX6 and SOX17 to access spontaneous differentiation into mesoderm, ectoderm and endoderm lineages respectively. When KIND1 cells were induced to differentiate using media containing 10% FBS (final concentration), expression of BRACHYURY (mesoderm specific) and PAX6 (ectoderm specific) genes was seen from 6 hours onwards (Figure 2B). However, no expression of early endoderm specific transcription factor SOX17 was seen. Thus, upon differentiation cells primarily of mesoderm and ectoderm would have formed by the end of 22 hours, but the bands for BRACHURY and PAX6 appear faint, this could be due to the short time frame we used, if we had extended the time to 48 hours probably robust expression of lineage specific markers would have been seen.

Figure 2 RT-PCR gel images of pluripotency associated genes and lineage specific genes in undifferentiated and differentiated human embryonic stem cells. Expression of pluripotency associated genes OCT4, NANOG and SOX2 in cells prior to passaging (UD) at >70% confluency, and then at 6, 18 and 22 hours post-seeding (A). Expression representative lineage markers BRACHYURY (mesoderm), PAX6 (ectoderm) and SOX17 (endoderm) at 6, 18 and 22 hours after addition of differentiation media (B). β2 MICROGLOBULIN was used as housekeeping control in (A) and (B). UD, undifferentiated; NTC, no template control.

Once, we established that we had both undifferentiated and differentiated human embryonic stem cells, we moved ahead to determine expression of the core circadian genes. In order to understand the circadian cycle gene expression in undifferentiated human pluripotent stem cells, we harvested RNA at 6, 18 and 22 hours after passaging, as well as cells on the eve of passaging (days 4–5) to serve as control. For the initial 24 hours after seeding the human embryonic stem cells appear slightly mesenchymal like in morphology (Figure 2A), but as the cells proliferate, they attain epithelial morphology. We performed RT-PCR for genes associated with pluripotency—OCT4, NANOG and SOX2, and observed that all three genes were expressed at all the time points (Figure 2A). Once we established that KIND1 cells were pluripotent, we then carried out RT-PCR to investigate expression of circadian genes namely CLOCK, BMAL-1, PERIOD and CRYPTOCHROME. We found that PERIOD, BMAL-1 and CRYPTOCHROME genes were expressed at 6, 18 and 22 hours post seeding, however CLOCK gene expression was lowest in day 4 undifferentiated cells but was highly expressed post seeding (Figure 3A). We then looked for expression of CLOCK, BMAL-1, PERIOD and CRYPTOCHROME at 6, 18 and 22 hours post addition of differentiation media (Figure 3A,B). Interestingly expression of CLOCK was much lower in differentiated human embryonic stem cells, and PERIOD which was absent at 22 hours in undifferentiated cells was expressed at all time points in differentiated cells (Figure 3A,B). Using several agarose gels images (n=4) for every time point, we used ImageJ to perform semi-quantitative analysis. We observed that CLOCK expression seems to be downregulated in differentiated cells (Figure 4A), while BMAL-1, PERIOD and CRYTOCHOME show cyclicity (Figure 4B,C,D).

Our work demonstrates that core circadian cycle genes CLOCK, BMAL-1, PERIOD and CYRPTOCHROME shown cyclicity in human pluripotent stem cells in undifferentiated state as well as upon spontaneous differentiation into mesoderm and ectoderm, even though there are no definite light/dark cycles for the in vitro cultured cells. After decades of painstaking work, the set of neurons in the brain called the superchiasmatic nuclei were found to control the circadian rhythm (14). The circadian proteins along with chromatin modifiers, RNA binding proteins, phosphatases and kinases control expression of genes in a rhythmic manner (15-17). Human pluripotent stem cells have the ability to differentiate into any cell lineage and they can be used in cell replacement therapies, but if circadian genes play pivotal role in the differentiation process, then it is imperative to understand their dynamics in human pluripotent stem cells. Circadian genes are crucial for proliferation and functioning of intestinal cells, liver cells, hormone producing cells, heart cells and immune cells (2,12,18,19) however their expression pattern in human pluripotent stem cells has not been completely elucidated.

Bmal-1 has been shown to control expression of inflammatory cytokines that are required for proliferation of intestinal cells, and mice with mutated Bmal-1 show impaired intestinal regeneration (18). Rogers et al. 2017 compared expression of Period, Bmal-1 and Rev ErbAα in human bone marrow derived stem cells, adipose-derived stem cells and dental-derived stem cells (20). They showed differential expression of Period, Bmal-1 and Rev ErbAα in different human adult stem cells, however authors appeared to have shown normalized expression but qRT-PCR inverse normalized expression should be given. Recently, it was shown that by simply adjusting cells to regular feeding and fasting cycles, the in vitro generated islet cells get entrained and these cells become functionally mature islets cells in vitro (21).

The authors thank NMIMS Sunandan Divatia School of Science for providing the necessary facilities, reagents and encouragement to undergraduate students to carry out the research work.

Conflicts of Interest: All authors have completed the ICMJE uniform disclosure form (available at http://dx.doi.org/10.21037/sci-2020-014). The authors have no conflicts of interest to declare.