Stem cells can be defined as undifferentiated cells that have the ability to produce exactly similar cells, capable of dividing indefinitely (self-renewal), and also capable of differentiating into specialized cell lineages (1).

The interest in umbilical cord tissues is growing, because they are considered as a very rich source of mesenchymal stem cells, which provide a great potential for the field of regenerative medicine. Many clinical trials are currently investigating the use of Cord-derived haematopoietic as well as mesenchymal stem cells for neurological and autoimmune disorders such as autism, cerebral palsy and type 1 diabetes (4).

To establish a CBB, the number of CD34+ cells in each cord blood unit (CBU) must be sufficient, that’s why maternal and neonatal factors should be considered when selecting CBUs.

Many factors have been suggested to influence the quantity of CD34+ Cell derived from the umbilical cord blood, and that may be responsible for the variations in the reported results. Among these factors; the birth weight, sex of the newborn and maternal age which may have an effect on the concentration of CD34+ cells (5).

The aim of this study was to assess the total number of CD34+ cells in umbilical cord blood and to study the effect of some maternal and neonatal factors such as; maternal age, number of previous live births, presence of any maternal disease, gestational period, mode of delivery (vaginal vs. cesarean delivery), baby’s birth weight, weight of the placental, infant’s gender, and length of umbilical cord and their effect on the CD34+ cells content of CBUs.

This is an experimental study carried out on the umbilical cord blood sample which was collected in the delivery room in El-Mehalla General Hospital and sent within 24 hours to be processed at the Center of Excellence at Tanta University International Educational Hospital.

All samples were collected from the umbilical cord immediately after delivery of the baby and while the placenta is still in utero. The site of cord puncture was sterilized using iodine in a unidirectional movement. A 16-gauge needle connected to a blood donor set containing 35 mL of citrate phosphate dextrose anticoagulant was inserted into the umbilical vein; cord blood was allowed to flow by gravity, and the needle was not removed until the flow of blood had already stopped. UCB units were considered unacceptable if the volume of collected blood was less than 30 mL and/or if the unit delivery for analysis was delayed beyond 24 hours after collection.

Separation of mononuclear cells: The cord blood was diluted at a ratio of 2:1 with a clinical buffer, then the diluted cell suspension was carefully layered over high density gradient medium (Ficoll-Paque) in a 15 mL conical tube in a ratio of 2 diluted blood: 1 Ficoll. Samples then centrifuged at 2,000 rpm for 20 minutes at 20 °C in a swinging out bucket rotor without break and the mononuclear cell layer was aspirated carefully undisturbed at the interphase to be transferred to a new 15 mL conical tube. The cell pellet was then washed by adding up to 10 mL of clinical buffer, mixed gently and centrifuged at 1,200 rpm for 15 minutes at 20 °C, then the supernatant was carefully and completely removed (this step was repeated twice) lastly the cell pellet was re-suspended in appropriate amount of clinical buffer (final volume up to 108 total cells/ 300 µL of clinical buffer) (6).

The cell pellet was re-suspended in 1 mL clinical buffer with the CD Microbeads (300 µm) Mixing well for the cell suspension and then refrigerated for 30 minutes, the cells after that were washed with clinical buffer (10 mL) and centrifuged at 1,800 rpm for 20 minutes, then complete aspiration of the supernatant was done followed by suspension of the cells in 500 µL buffer. Column (MS column) was placed in the magnetic field of Mini MACS separator.

Statistical analysis of the data collected from present study was done using the mean, standard deviation, and Chi-square tests by SPSS V.16. Significance was adopted with P<0.05 for interpretation of results of tests of significance.

Samples were collected from 20 deliveries, 19 cesarean section (CS) and one normal vaginal delivery (NVD). The maternal age ranged from 22 to 34 years. They gave birth to 9 males and 11 females. 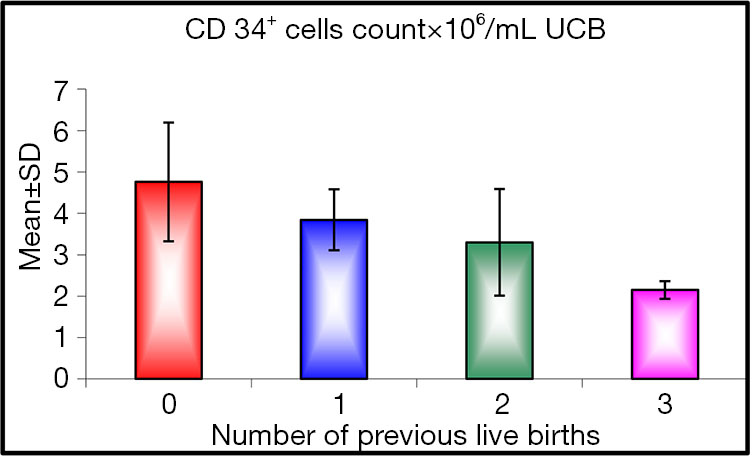 Figure 1 Difference between the mean of CD34+ cells as regard to previous live births (P=0.045). 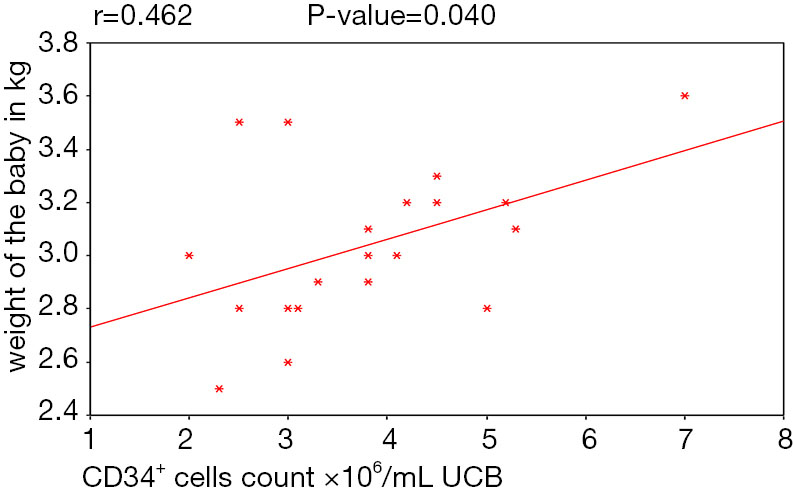 Figure 2 Correlation between weight of the baby and CD34+ cells count.

Researches done by Jan et al. 2008 (10) and Ballen et al. 2001 (11) agreed with our study that the first baby has a higher CD34+ cell count than subsequent live births. They explained that on the bases that the first pregnancy is usually associated with weakening of the placental vasculature and also they suggested that first babies are usually associated with a longer duration of labor; longer labor has been associated with higher TNC counts, and hence a higher CD34+ cell count which constitute a fraction of the TNC.

But our study was in disagreement with Thame et al. 2004 (12) who stated in their researches that the higher the number of previous live births, the higher the CD34+ cell counts in UCB. They explained their results by that bigger placental size in multiparous mothers thus providing larger volume of cord blood and more CD34+ cells count.

In our study, the sex of the babies from whom the cord blood was collected had no significant effect on CD34+ cells count. Ballen et al., 2001 (11) and Chandra et al., 2012 (13) reported the same results and found no correlation between the baby’s sex and UCB derived CD34+ cells while Nakagawa et al., 2004 (5) showed that UCB from female babies had significantly higher CD34+ cell counts when compared to UCB derived from male babies. Page et al., 2014 (14) and Bassiouny et al., 2015 (15) had shown opposite results to the previous findings. They explained that by stating that male babies have a higher UCB volume, and higher birth weight than females.

On the contrary, other investigators observed a higher CD34+ cell concentration and Colony Forming Unit concentration in case of CS than that of normal vaginal mode [Aroviita et al., 2005 (18); Jan et al., 2008 (10) and Chandra et al., 2012 (13)], as an explanation for this finding we can assume that during CS the newborn is held above the placenta before clamping of the cord, causing a gravity-enhanced downward ﬂow of blood into the umbilical cord. Another hypothesis is that CS permits a faster manual extraction of the placenta than in case of NVD, hence reducing the chance of clot formation in the UCB (19).

Lin et al. 2000 (26) also demonstrated that CD34+ cell counts detected in human UCB is significantly higher in very preterm fetuses (from 25 to 29 weeks of gestation) compared to the more mature preterm (from 29 to 35 weeks), and both groups of preterm newborns, showed a higher concentration of CD34+ cells compared to full term babies. On contrast Chandra et al. 2012 (13) reported significant positive correlation between the gestational age CD34+ cell concentration in UCB because CD34+ cell concentration may vary significantly with the process of hematopoiesis during deferent phases of gestation, an explanation for this finding is that with advancement of gestational age and placental aging, the fetus would become progressively hypoxic, triggering the defense mechanisms that increases the number of hematopoietic cells in the UCB (25).

Birth weight was another parameter statistically analyzed in our study and showed that there was a statistically significant positive correlation between the weight of the baby at birth and CD34+ cells count. Several studies by Nakagawa et al., 2004 (5); Mancinelli et al., 2006 (21); Chandra et al., 2012 (13); stated that the increase in birth weight was associated with higher CD34+ cell numbers. Ballen et al. 2001 (11) reported that each 500 g increase in birth weight contributed to an increase of about 11% in the TNC count, as well as a 28% increase in CD34+ cell. Page et al., 2014 (14) showed that babies who weigh more than 3,500 g had higher CD34+ cell counts.

Limitations of the study

One of the main limitation of this study is the low number of the studied cases.

Ethical Statement: The authors are accountable for all aspects of the work in ensuring that questions related to the accuracy or integrity of any part of the work are appropriately investigated and resolved. This study was approved by REC (Research Ethical Committee) of the Faculty of Medicine, Tanta University (Protocol ID: 3164/08/17). Written informed consent was obtained from the mothers participating in the study before cord blood sampling, with approval of cord blood analysis as well as data usage and publication.