Adipose tissue as a source for multipotent mesenchymal stem cells has many advantages over bone marrow. Adipose tissue collection from patient for autologous use is easier, less invasive and painful compared to bone marrow puncture. Moreover, lipoaspirate waste from obese person who wish to lose their excess fat can be used as allogeneic source of MSCs. Adipose tissue derived MSCs (AT-MSCs) showed subtle differences from bone marrow derived MSCs (BM-MSCs) (1). However, the same as BM-MSCs, they can differentiate into various types of cells, such as chondrocytes, osteocytes and adipocytes (1,2). Moreover, MSCs might release paracrine factors that might help in the healing of various disease conditions (3).

We have developed a simple lipoaspirate washing method using a coffee filter to eliminate the solutions that are used to facilitate liposuction procedure. Before further processing and isolating adipose tissue derived mesenchymal stem cells (AT-MSCs), lipoaspirate should be free from liposuction solution as the solution is toxic to cells (4). We have used the simple washing method processed AT-MSC in ongoing clinical trials. Before administration to patients, MSCs are usually suspended in physiologic saline. However, MSCs only survive for a limited time in physiologic saline (5). Therefore, an alternative solution that can preserve MSC survival will be beneficial. Therefore, the purpose of this study was to compare the use of physiologic saline and Dulbecco’s modified Eagle’s Medium (DMEM) as temporary storage solution for our AT-MSCs.

This was an in vitro analytical study, which was conducted in Stem Cell Medical Technology Integrated Service Unit, RSCM/Faculty of Medicine Universitas Indonesia, Jakarta, Indonesia, from June through December 2015. Ethical clearance was obtained from Faculty of Medicine Universitas Indonesia Ethical Committee in 2014 and was amended to get prolonged (ethical clearance number: 157/H2. F1/ETIK/2014), which work conformed to the provisions of in accordance with the Helsinki Declaration as revised in 2013.

The sample (one) was cryopreserved pre-characterized human AT-MSCs, which were processed and isolated using the simple washing method using a coffee filter (4), and stored at P1 in Stem Cell Medical Technology Integrated Service Unit, RSCM/Faculty of Medicine Universitas Indonesia, Jakarta, Indonesia. The sample was derived from femoral fat that was donated by a 35-year male, who underwent an orthopedic surgery due to femoral fracture.

Cryopreserved AT-MSCs were thawed and recultured as previously described (6), in five T25 flasks. The cells were attached on plastic culture ware and showed fibroblastic morphology (Figure 1). After confluence, the cells were harvested, pooled, and counted. Cell suspension was homogenized and divided in two equal numbers and transferred into two Eppendorf tubes. Then the tubes were centrifuged at 2,500 rpm, and the cell pellets were each resuspended in 1 mL of either physiologic saline (B Braun, Ecosol NaCl), or DMEM (Gibco, cat. 31600-034 1X), kept in 4 ℃, and used to assess the viability and proliferation capacity. 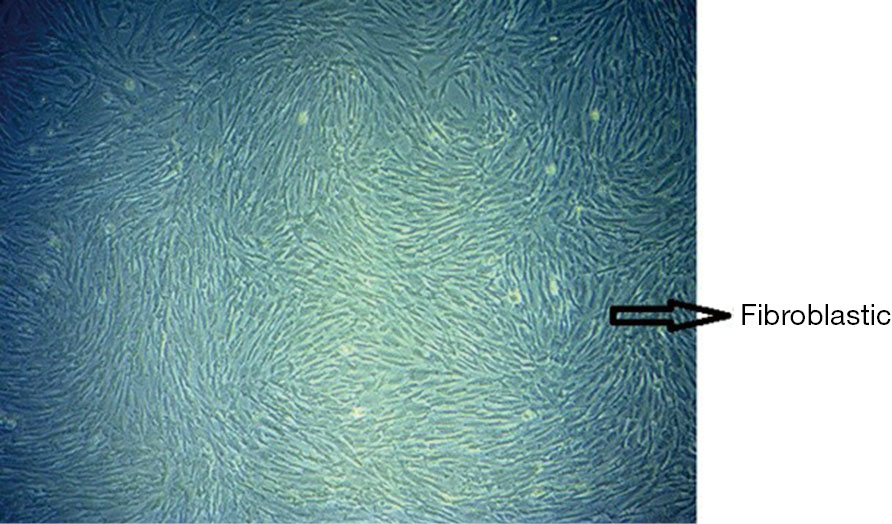 For both physiologic saline and DMEM suspended AT-MSCs, viability assessments were done by Trypan blue (Gibco, cat. 15250-061) exclusion method in four replications. Assessments were done at 0, 3, 6, 24, 48, 72, and 96 hours. Viability was calculated by dividing viable with total cell number.

Proliferation capacities were assessed by computing the population doubling time (PDT) (7). PDT was assessed at 0, 3, 6, 24, 48, 72, and 96 hours, in four replications, for both physiologic saline and DMEM suspended AT-MSCs.

Comparison of viability and proliferation capacity between physiologic saline and DMEM suspended AT-MSCs at 3, 6, 24, 48, 72, and 96 hours can be seen in Figures 2,3. P values showed the significant differences.

Other studies on physiologic saline as storage solution in the same temperature as our study showed variable results (9-11). Ra et al. (9) found that average AT-MSC viability was 85.4% after 72 hours, which was better than our study. Veronesi et al. (10) found that after 18 hours in physiologic saline, viability of bone marrow MSCs (BM-MSCs) was 83% that was more or less the same as our study. Sohn et al. (11) found that after 6 hours, viability of BM-MSCs was >85% that was slightly better than our study. Moreover, they assessed viability by Annexin V/PI, which also detect early apoptotic cells as dead cells and resulted in lower viable cell result compared to trypan blue exclusion method, which was used in this study.

Various other studies on various diseases administered various kind of cells that were suspended in various solutions, but those studies did neither check the viability nor the proliferation capacity of the cells at various time points in those solutions (12-17). Therefore, comparison with our result was not possible.

In our study, for cells stored in DMEM viability corresponded with PDT result, where both showed significant decrease in viability and increase in PDT after 24 hours. However, for those in physiologic saline, viability did not correspond with PDT, where viability dropped significantly at 6 hours and beyond, though after 48 hours the viability was still >70%, while PDT increased significantly after 24 hours (Table 2). However, significant difference in PDT between physiologic saline and DMEM only occurred at 48 hours (Figure 2). The inconsistent result in our study might be due to the low replication number that in some cases caused high standard deviations, which was the limitation of our study.

In conclusion, for cell therapy, viability requirement showed that our AT-MSCs could be stored for 48 hours in physiologic saline and 24 hours in DMEM respectively. However, to be functional, storage should not exceed 24 hours.

Funding: This work was supported by a research grant from the Ministry of Research, Technology and Higher Education of the Republic of Indonesia, Hibah Inovasi Perguruan Tinggi di Industri (grant number: 298/UN2.R3.2/HKP.05.00/perjanjian 2017).

Ethical Statement: Ethical clearance was obtained from Faculty of Medicine Universitas Indonesia Ethical Committee in 2014 and was amended to get prolonged (ethical clearance number: 157/H2. F1/ETIK/2014), which work conformed to the provisions of in accordance with the Helsinki Declaration as revised in 2013.