The self-renewal and the differentiation of hematopoietic stem cells (HSCs) are two distinct processes that depend on niche composition (1-3). Two types of HSC niches have been identified: osteoblastic niches (4-6) and vascular endothelial niches (7,8). Extensive evidence has shown the importance of osteoblastic niches in self-renewal and differentiation. The spindle-shaped N-cadherin+CD45− osteoblastic cells located on the bone surface are a key component of this type of niche and support HSCs through a specific adhesive interaction between N-cadherin and β-catenin (5). Tie2+ HSCs localize to the endosteal surface of the bone marrow (7). Its ligand, angiopoietin-1, is mainly produced by osteoblasts. Angiopoietin-1 cells can also be detected from the bone surface and are co-expressed with osteocalcin, a marker of osteoblasts. Moreover, the expression of N-cadherin in HSCs increases when the cells are cultured on feeder layers of OP9 stromal cells that are transfected with full-length angiopoietin-1, leading to the maintenance of self-renewal and protection of HSCs from stress factors. Calvi et al. (4) reported that osteoblastic cells with activated parathyroid hormone receptors increase the production of Notch ligand jagged 1, which leads to an increased number of HSCs. Furthermore, thrombopoietin produced by osteoblast administration transiently increases the quiescent population of HSCs (9), which suggests that the thrombopoietin/Mpl pathway is a component of the HSC osteoblastic niche. Although related to both osteoblastic and vascular endothelial niches, most Lin−Sca-1+c-Kit− (LSK) cells were found to be in contact with cells expressing high amounts of CXCL12 (10), called CXCL12-abundant reticular cells.

Previous studies have reported the role of Polycomb group genes, including Bmi-1, Rae-28, and Mel-18 (11-14), in the self-renewal of HSCs. Polycomb genes are epigenetic regulators that play a key role in gene repression through chromatin modification (15). Bmi-1 expression is required for the generation of self-renewing HSCs (14), while an increase in Mel-18 expression promotes differentiation (11). Moreover, Bmi-1 and Mel-18 share the same structural motif, and we have previously reported that the ratio between Bmi-1 and Mel-18 expression determines whether the cell self-renews or progresses to differentiation (12).

Specific culturing methods for studying the mechanisms of self-renewal in vitro and in vivo have been previously reported. Hematopoietic cells can be maintained on bone marrow stromal cells for several months (18), and their colony-forming ability can be maintained during long-term survival (18-23). Thrombopoietin can maintain undifferentiated hematopoietic cells for a long period of time when co-cultured with stromal cells (24,25). Several cell lines that maintain hematopoiesis have also been reported (26-29), making long-term culturing easier while allowing for in vitro regeneration. In contrast to maintaining undifferentiated HSCs, we aimed to analyze the regulatory mechanism of HSC self-renewal and hypothesized that HSC self-renewal would be affected by attachment to osteoblasts. We present the following article in accordance with the ARRIVE reporting checklist (available at https://dx.doi.org/10.21037/sci-2021-019).

For this experiment, 5- to 8-week-old C57BL/6 mice were used. Ly5.1 mice were obtained from Sankyo Labo Service Corporation (Tokyo, Japan) and Ly5.2 mice are routinely used in our laboratory. All mice were bred and maintained in an animal facility at Hiroshima University. The light was maintained from 8:00 to 20:00, and the mice were fed a radiation-sterilized diet (CLEA Japan, Inc., Tokyo, Japan). This study was approved by the Animal Care and Use Committee of Hiroshima University (approval number 19-8), in compliance with institutional guidelines for the care and use of animals.

Co-culture with hematopoietic cells and osteoblasts

Briefly, Sca1-positive cells purified using magnetic beads were co-cultured with human osteoblasts. Human osteoblasts were used to prevent contamination of murine osteoblasts in the bone marrow. After 24 h, the cell plate was turned upside down on a bigger plate, and the medium was changed after 24 h. Through this procedure, cells that did not attach to the osteoblasts were removed. After 48 h (24 h for cell division experiments), the precipitated cells and the cells that were attached to osteoblasts were collected separately, and Sca1-positive cells were purified again using magnetic beads. The basic culture medium used was Dulbecco’s modified Eagle’s medium (Amersham Biosciences, Piscataway, NJ, USA). In addition, STEMPRO-34 nutrient supplement (Invitrogen, Carlsbad, CA; Catalog number 10641) and cytokines were added to this medium. Human Flt3-ligand (PeproTech, London, UK) and human thrombopoietin (Kirin Brewery, Tokyo, Japan) were added to each medium at a final concentration of 20 ng/mL.

Sca1-positive cells were labeled with CFSE to analyze cell division after culturing. Staining was performed according to the manufacturer’s instructions (Molecular Probes, Eugene, OR, USA).

We performed a transplantation experiment on the F1 hybrids of Ly5.1 and Ly5.2 mice. Two groups of at least nine mice were transplanted with either non-adhered Sca1-positive cells or adhered Sca1-positive cells. The donor-cultured Sca1-positive cells (2.5×102) and competitor fresh marrow cells (2×105) were intravenously transplanted into the F1 recipients. Recipient mice were treated orally with busulfan (total dose of 180–200 mg/kg body weight over 5 days). Sixteen weeks after transplantation, peripheral blood samples were collected from the recipient mice. The two transplant cell populations were distinguished by staining the cells with phycoerythrin-conjugated anti-Ly5.1 and allophycocyanin-conjugated anti-Ly5.2. All antibodies were purchased from Abcam (Cambridge, UK).

Co-culture with hematopoietic cells and osteoblasts 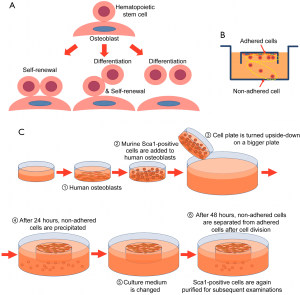 Figure 1 Co-culture with hematopoietic cells and osteoblasts. (A) Model of the hypothesis on hematopoietic stem cell self-renewal. (B) We designed an inverted culture system to separate cells adhered to osteoblasts from those detached from osteoblasts. (C) Culture procedure. Briefly, Sca1-positive cells are added to osteoblasts. Then, the cell plate is turned upside down on a bigger plate. After 24 h, non-adhered cells precipitate and the culture medium is changed. Sca1-positive cells that did not adhere to the osteoblasts within 24 h are removed. After 48 h, non-adhered cells are separated from adhered cells after cell division.

Investigation of the cell division number of murine Sca1-positive cells 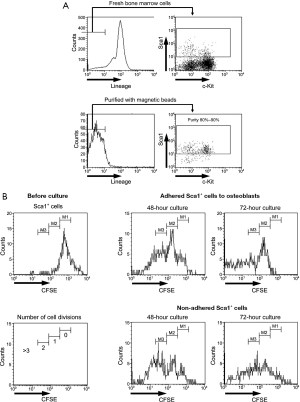 Functional analysis of attached and precipitated Sca1-positive cells in vitro 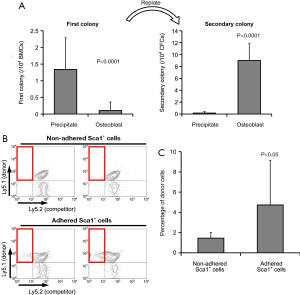 Functional analysis of adhered and precipitated Sca1-positive cells in vivo 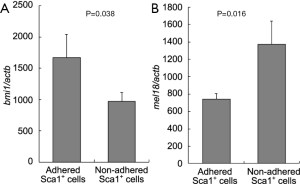 Figure 4 Expression of Polycomb genes in each fraction of Sca1-positive cells. The expression of Bmi-1 and Mel-18 is normalized to the Actb housekeeping gene. Values are represented as mean ± standard deviation of three experiments.

Our results suggest that when HSCs remain in osteoblastic niches after cell division, they self-renew and that when stem cells leave the niches, they undergo differentiation. To graphically represent this hypothesis, we compared HSCs to takoyaki balls (a popular food in Japan) and the niches to the wells of a takoyaki pan (Figure 5). The number of HSCs was regulated so that the cells would not be depleted in the bone marrow. In the bone marrow transplantation experiment, when the transfused HSCs entered vacant niches, they self-renewed and then occupied other empty niches (30). In other words, HSCs are not depleted by undergoing 1–2 cell divisions after transplantation. The niches participate not only in the control of HSCs but also in the engraftment of transfused HSCs (1,2,31). Based on this concept, adjusting the number of osteoblasts and HSCs would confirm the hypothesis that HSCs begin to differentiate after they fill vacant niches. This may determine whether the self-renewal of HSCs follows the stochastic model, the instructive model, or both.

Figure 5 Model of HSC self-renewal: the “takoyaki hypothesis”. This hypothesis can be easily understood by comparing HSCs to takoyaki balls and the niches to the wells of a takoyaki pan. HSCs self-renew when they remain in osteoblastic niches after cell division and differentiate when they leave the niches. HSC, hematopoietic stem cell.

There have been many reports concerning the molecular mechanism of adhesion between osteoblastic niches and HSCs. When mesenchymal stem cells differentiate into osteoblasts, they lose their ability to promote HSC self-renewal (32). In this study, by transfecting various genes into osteoblasts, we were able to investigate whether these molecules were related not only to the maintenance of HSCs but also to the ability of the cells to self-renew. In addition, various internal factors associated with the self-renewal of HSCs, such as Bmi-1, have been reported, highlighting their importance in stem cell biology.

Our results provide novel insights into the important role played by the osteogenic microenvironment in the fate of HSCs. We showed that HSCs that remain in osteoblastic niches self-renew after cell division, whereas those that leave these niches undergo differentiation.

We would like to thank Prof. Yoshihiro Takihara (Department of Stem Cell Biology, Research Institute for Radiation Biology and Medicine, Hiroshima University) for providing guidance regarding bone marrow transplantation. We thank the Analysis Center of Life Science, Hiroshima University, for allowing us to use their facilities. Editorial support, including medical writing, high-resolution image creation, collating author comments, copy-editing, fact-checking, and referencing, was provided by Editage, Cactus Communications.

Funding: This work was supported by a grant from the Association for the Advancement of Medicine of the Tsuchiya Foundation in 2007.

Reporting Checklist: The authors have completed the ARRIVE reporting checklist. Available at https://dx.doi.org/10.21037/sci-2021-019

Conflicts of Interest: All authors have completed the ICMJE uniform disclosure form (available at https://dx.doi.org/10.21037/sci-2021-019). The authors have no conflicts of interest to declare.

Ethical Statement: The authors are accountable for all aspects of the work in ensuring that questions related to the accuracy or integrity of any part of the work are appropriately investigated and resolved. Experiments were performed under a project license (approval number 19-8) granted by the Animal Care and Use committee board of Hiroshima University in compliance with institutional guidelines for the care and use of animals.