The keratocystic odontogenic tumor (KCOT) is notorious for significant morbidity to the patient upon wide resection and management of the bone defect remains a challenge to the operating surgeon (1). Fragile cyst walls with a propensity towards cortical breach and satellite cysts contribute to its high recurrence (2,3). Traditional methods involved in the management of KCOT include enucleation, marsupialization, chemical cauterization, marginal resection, or en-block resection depending upon the size and location of the tumor (4-7). Reconstruction of large defects always remained a challenge in this scenario. Considering the potentiality of autologous bone marrow aspiration concentrate (BMAC) in varied medical fields, an innovative approach to deal with KCOT using BMAC was devised. Autologous BMAC has all the elements needed for bone regeneration like the Bone Marrow derived Mesenchymal Stem Cells, platelets, soluble factors, and mononucleated cells (8). The bone marrow concentrates were reported to successfully regenerate segmental mandibular defects up to 15 cm in length (9,10). We present the following case in accordance with the CARE reporting checklist (available at http://dx.doi.org/10.21037/sci-2020-059).

A 55 years old female patient presented with a chief complaint of pain in the lower jaw region for the past 3 months. The medical history of the patient was unremarkable. Clinical examination revealed no evidence of swelling or lymphadenopathy. Panoramic imaging revealed a large, radiolucent lesion of size 10×4 cm with well-defined scalloped margins extending from the distal aspect of 47 to the distal aspect of 35 regions with no evidence of root resorption. The inferior border of the mandible was thin but intact (as shown in Figure 1). Computed tomographic (CT) images with three-dimensional reconstruction revealed a well-defined multilocular cystic lesion with buccal and lingual cortical bone erosion (as shown in Figure 2). Aspiration was negative. 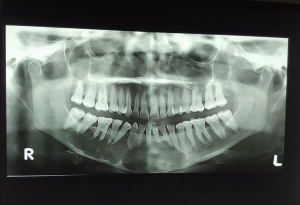 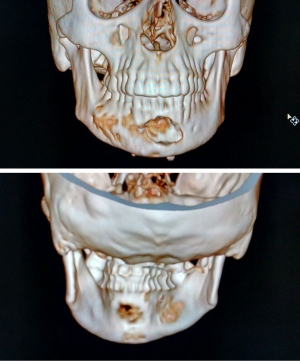 Treatment was done as a two-stage procedure.

Stage 1: the patient was operated on under general anesthesia. A vestibular incision was made from the right second molar to the left canine region. A full-thickness mucoperiosteal flap was elevated. A bony window opened near the first molar and the cyst was entered through the window. Cystic lining curettage and chemical cauterization was done using Carnoy’s solution (60% ethanol, 30% chloroform, and 10% glacial acetic acid) for one minute. The cystic cavity was thoroughly irrigated with saline solution. The cystic cavity was loosely packed with iodoform gauze of length 25 cm with one end outside. The incision closed using 3-0 vicryl with the bone window was kept open. The gauze piece was removed after 4 days. Appropriate analgesics and antibiotics were prescribed. The specimen was sent for histopathological examination. The tissue sent for HPE was diagnosed as KCOT. The postoperative OPG was performed after one month after the stage 1 procedure (as shown in Figure 3). 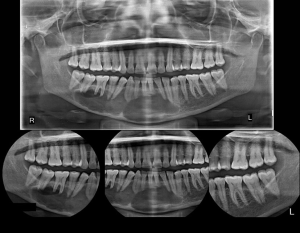 Figure 3 Postoperative OPG after one month after Stage 1 procedure.

Stage 2: this procedure was done after 2 months after the index surgery. Bone marrow was aspirated following all aseptic precautions. The patient was operated on under general anesthesia in a prone position. A stab incision was made in the posterior iliac crest. A bone marrow aspiration needle (11G, Precise, Leur lock) was inserted into the marrow cavity. Marrow collected from multiple sites at different angulations using a 50 mL syringe preloaded with 1 mL heparin to prevent coagulation. The aspirated bone marrow (60 mL) was mixed with ACD solution (Acid Citrate Dextrose) in a blood transfer tray in a ratio of 8:1 respectively. Biosafe Sepax (S-100) processing kits were used following standard protocols. The final BMAC obtained was 10 mL.

A vestibular incision was made from the right second molar to the left canine region. A full-thickness mucoperiosteal flap was elevated. The bony window was already present near the first molar region and a new bony window was created in the left mandibular canine region. The residual cystic lining was removed. All the cystic walls were made completely free from the lining. The cystic defect was filled with autogenous corticocancellous bone mixed with 7 mL of BMAC. Wound closure was done using 3-0 vicryl. The remaining 3 mL of BMAC was injected inside the defect at multiple sites. The immediate postoperative OPG was done as shown in Figure 4. 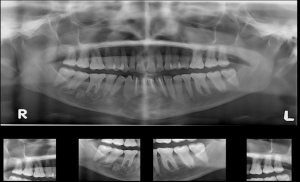 The patient was serially followed for 2 years (as shown in Figures 5,6). Lower lip numbness was noted on the right side for 6 months post-operatively. Recurrence of the lesion was noted at 2 years in the inter-radicular region between 43 and 44 (as shown in Figure 7). Extraction of 43 and 44 was done along with cyst enucleation and platelet-rich plasma (PRP) application. PRP augments bone regeneration by providing various growth factors. The patient remained asymptomatic until 4 years of follow-up with regenerated bone in the operated site without any signs of recurrence (as shown in Figure 8). 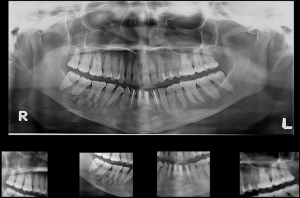 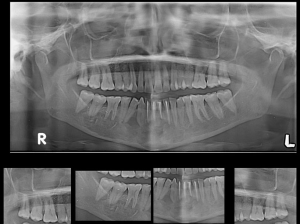 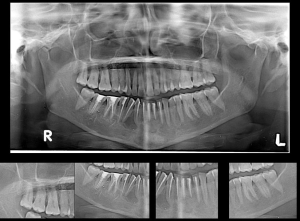 Figure 7 Follow-up after 24 months shows recurrence in interradicular region between 43 and 44. 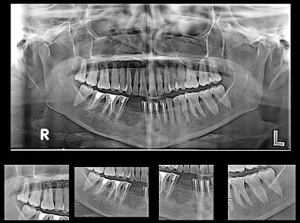 Figure 8 Postoperative OPG 6 months after extraction of 43 and 44 followed by PRP placement.

All procedures performed in studies involving human participants were in accordance with the ethical standards of the institutional and/or national research committee(s) and with the Helsinki Declaration (as revised in 2013). Written informed consent was obtained from the patient.

Odontogenic keratocyst (OKC) was renamed as KCOT considering the neoplastic nature of the lesion (11). Being a benign developmental odontogenic tumor, KCOT has many distinguishing features such as its locally aggressive nature and high recurrence rate (12,13). It represents 4–12% of all odontogenic cysts (14). Although the lesion is prevalent among all ages, it has a peak incidence in the second and third decades of life with a predilection for white males (15). Mandible remains the most common site of origin, of which half of them arise from the angle of the mandible (16). Although KCOT remains an intra-osseous lesion, peripheral lesions have also been reported. The involvement of the gingival or alveolar mucosa of the canine and premolar region is seen in the majority of the cases.

Although keratocystic tumors are diagnosed incidentally, they also present with pain and swelling. Imaging of the lesion reveals unilocular radiolucencies with well-defined margins (17,18). In the case of large lesions, the lesion is multi-loculated with scalloped borders as in our case. The cyst is often associated with an impacted tooth making dentigerous cyst a potential differential to this condition.

Multiple treatment methods have been proposed and debated for the management of KCOT. Minimizing the risk of recurrence and morbidity of resection remains a major challenge for any proposed line of management. Various modalities of treatment ranging from decompression through enucleation alone with or without curettage to complete resection have been employed in their management. Shear et al. reported the recurrence rate of KCOT to range from 3% to 60% (19).

Factors responsible for the recurrence of the lesion include its size, location, associated infection, teeth or mucosal involvement, and association with the Gorlin syndrome (20). Hence, ideal management is tailor-made as per the presentation on a case-by-case basis. Browne confirmed the higher recurrence rate of these KCOTs from other cysts and suggested that it was caused by an inherent property of the cysts themselves rather than the technique of removal (21). Many theories have been stated for the increased incidence of recurrence: delicate cystic lining which makes it susceptible to leave remnants after surgical removal, satellite cysts, or daughter cysts (22).

The conventional method for the treatment of most KCOTs is surgical enucleation, and for larger cysts, marsupialization is often later followed by enucleation. Since the lining of the cyst is thin and delicate which often leads to recurrence, the above-mentioned methods were not sufficient to prevent a recurrence. Adjunctive surgical treatment has been recommended by Ghali such as removal of the peripheral bone or en-bloc resection (23). The aforementioned methods are radical and associated morbidity is even higher. It often requires reconstruction for the restoration of function and esthetics. Other adjunctive treatments such as cryotherapy with liquid nitrogen were proposed by Schmidt (24) and irrigation of the curetted cavity with Carnoy’s solution after enucleation was suggested by Stoelinga (25) to address the residual tumor cells to prevent a recurrence. We used Carnoy’s solution as an adjuvant in our case.

Bone marrow aspirate concentrate (BMAC) enhances bone regeneration when the defect is being transplanted with progenitor cells (26). Enhanced osteogenesis is due to the presence of concentrated mononuclear cells in the BMAC (27). The dynamic migration of MSCs to the defect site is a time-, dose- and CXCR4-dependent process (28). Various studies demonstrated the beneficial role of BMAC in bone healing (29,30). Autologous mesenchymal stem cells when used with osteoconductive scaffold acts as a graft material with high regenerative capacity. Talaat et al. used autologous BMAC and concentrated growth factors for bone regeneration after the enucleation of mandibular pathologic lesions. Accelerated bone regeneration and improved bone density were observed (31). Manimaran et al. treated two cases of osteoradionecrosis (ORN) with autologous BMAC and had excellent functional outcomes without the morbidity of radical surgery (32).

Potential advantages in BMAC include its technical simplicity in harvesting without the risk of allogeneic disease transmission (33). Recent studies have highlighted that MSCs are capable of regenerating large bone defects when used in combination with bone substitutes (34,35). PRP, can be an excellent addition to MSCs and freeze-dried bone grafts. MSCs express receptors for the growth factors contained in the PRP and in vitro studies have shown that the addition of PRP promotes MSC proliferation. Autologous BM-MSCs and PRP may lead to increased bone regeneration and reduced healing time (36,37).

The KCOT has been an enigmatic subject matter among surgeons over many decades concerning its origination, the pattern of growth, clinical presentation, and modality of treatment. Autologous BMAC with corticocancellous bone acts as an osteoconductive scaffold capable of regenerating the large bone defect created by the curettage of OKC. The ascertainable advantages of our protocol in the management of KCOT include (I) erasure of lesion, (II) regeneration of large bone defect due to curettage, (III) optimal healing at the earliest, and (IV) preservation of function and shape of the jaw.

Reporting Checklist: The authors have completed the CARE reporting checklist. Available at http://dx.doi.org/10.21037/sci-2020-059

Conflicts of Interest: All authors have completed the ICMJE uniform disclosure form (available at http://dx.doi.org/10.21037/sci-2020-059). The authors have no conflicts of interest to declare.

Ethical Statement: The authors are accountable for all aspects of the work in ensuring that questions related to the accuracy or integrity of any part of the work are appropriately investigated and resolved. All procedures performed in studies involving human participants were in accordance with the ethical standards of the institutional and/or national research committee(s) and with the Helsinki Declaration (as revised in 2013). Written informed consent was obtained from the patient.