Despite the effort to optimize immunosuppression (IS) protocols, the morbidity associated with immunosuppressants significantly reduces transplant recipient’s lifespan. Up to-date, bone marrow transplantation (BMT)/hematopoietic stem cell transplantation and induction of mixed chimerism remain the most successful approach for tolerance induction (1). However, BMT requires recipient’s conditioning excluding some of the patients in need of allotransplantation. Experimental and clinical BMT studies reported presence of donor/recipient cells and suggested their contribution to regeneration and immune response (2-14).

Cell fusion, an ubiquitous process of asexual merging of two or more parental cells (15,16), was shown to change the morphology and to reprogram the function of resulting hybrids (2). Hybrids presented increased migratory activity (17,18), proliferation (17) and drug resistance (19) as well as mixed phenotype and expression patterns (20,21). Based on these studies we aimed to develop a novel Donor Recipient Chimeric Cell (DRCC) therapy via ex vivo fusion of bone marrow cells (BMC) from transplant donor and recipient. The proposed approach of DRCC presenting mixed donor/recipient phenotype aims to create cell therapy offering decreased immunogenicity while improving DRCC engraftment and supporting tolerance induction.

This study focused on establishing and in vitro characterization of DRCC as well as comparison of DRCC with the naïve BMC in preparation for preclinical testing in solid organ and Vascularized Composite Allotransplantation (VCA) models as a basis for potential future clinical application.

We present the following article in accordance with the ARRIVE reporting checklist (available at http://dx.doi.org/10.21037/sci-2020-044).

Institutional Animal Care and Use Committee (IACUC) of Cleveland Clinic, Cleveland, Ohio approved this study (License number: 2012-0841). Cleveland Clinic IACUC is accredited by the American Association for the Accreditation of Laboratory Animal Care (AAALAC). All animals received humane care in compliance with the ‘Principles of laboratory animal care’ formulated by the National Society for Medical Research and the ‘Guide for the care and use of laboratory animal resources’ published by the US National Institute of Health.

Annexin V staining (BioLegend, San Diego, CA, USA) of BMC controls and DRCC (1×106, n=3/group) was performed after sorting, at 24 hours and at 5 days after sorting according to the manufacturer’s instruction (BioLegend) and evaluated by LSRFortessa and Flowjo software (BD). Gating strategy for Annexin V/Sytox blue staining evaluation was based on previously published two-stage gating strategy (26).

The medium samples from cultures of DRCC in enriched StemSpan® SFEM medium were collected at days 1, 5 and 14. ELISA was performed in triplicates to assess the secretion of IL-2, IL-4, IL-10, TGFß1, IFNγ and TNFα (ThermoFisher Scientific) according to manufacturer’s instructions. Bio-Rad iMark Microplate Absorbance Reader (Bio-Rad Laboratories, Hercules, CA, USA) was used to acquire data.

To assess DRCC’s ploidy (n=3/assay), the DRCC were incubated with 10µg/mL Hoechst 33342 dye for 45 minutes at 37 °C. Immediately after completion of staining and washing, samples were assessed by BD LSRFortessa and Flowjo software (BD).

COMET assay kit (Abcam, Cambridge, United Kingdom) assessed the DNA damage after cell fusion (n=3). The isolated BMC, PKH labeled BMC and DRCC were processed according to manufacturer’s instruction. Slides were assessed using MZ16FA stereomicroscope equipped with 10× and 20× objectives, Retiga 2000R camera (Leica). Fifty cells were evaluated in each gel using visual scoring system 0-4, from 0 (no tail) to 4 (all DNA in tail) with the average minimal score of 0 and average maximal of 200 “arbitrary units” (27).

The fusion procedure in combination with gating strategy allowed for selection of DRCC with efficacy of 77.7%±9.1%. The DRCC’s chimeric state was confirmed using the overlapping PKH26/PKH67 labeling by confocal microscopy and the presence of MHC class I sequences specific for ACI (RT1a) and Lewis (RT1l) donors in the DNA material of sorted DRCC (Figure 1A,B,C). DRCC presented >95% purity, as confirmed by flow cytometry and 95.2%±2.3% viability post-fusion, as confirmed by Trypan blue staining. 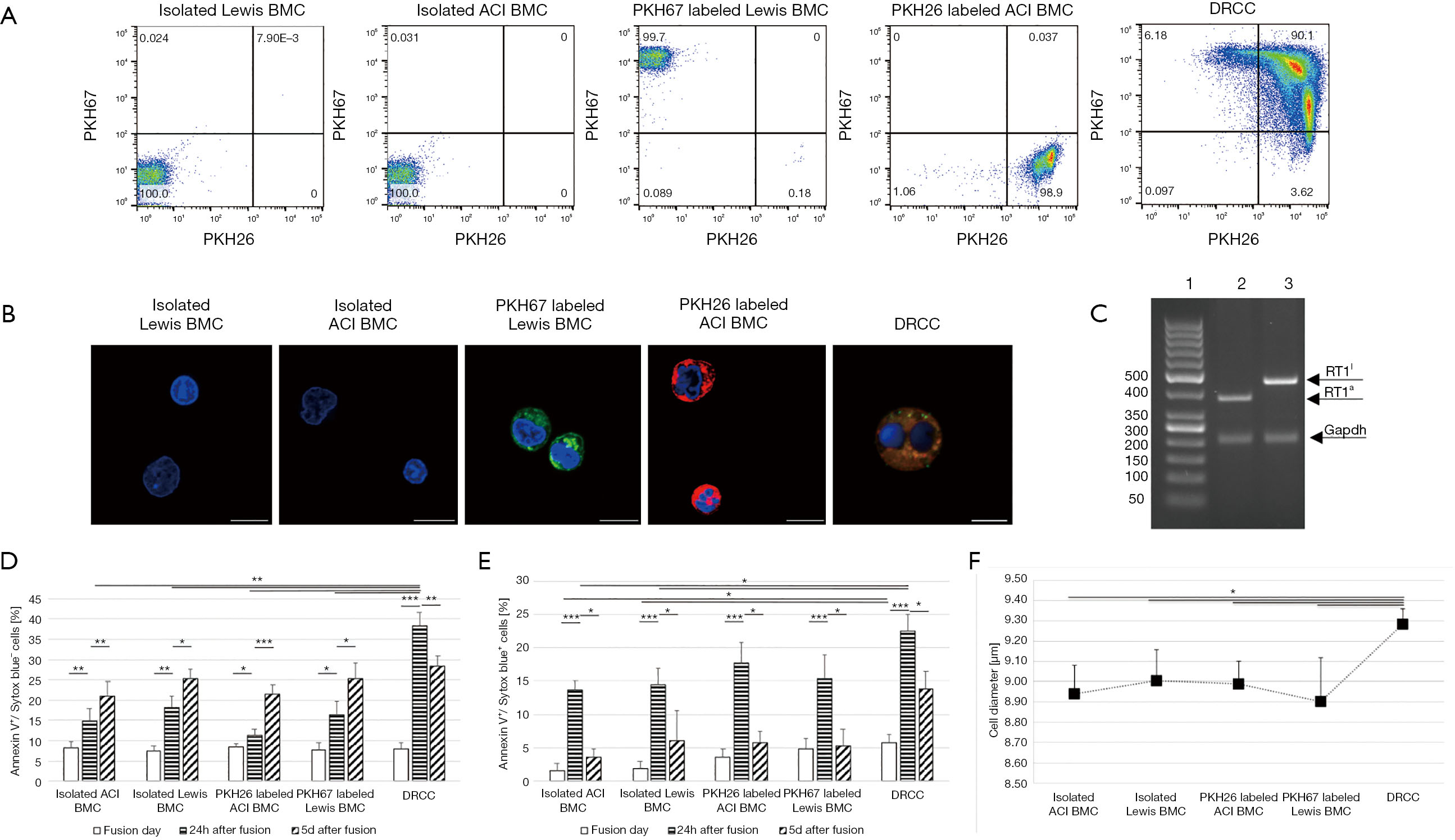 Evaluation of apoptosis in cultured DRCC

Confirmation of hematopoietic phenotype of DRCC

Confirmation of DRCC’s proliferation and differentiation

Confirmation of tolerogenic properties of DRCC 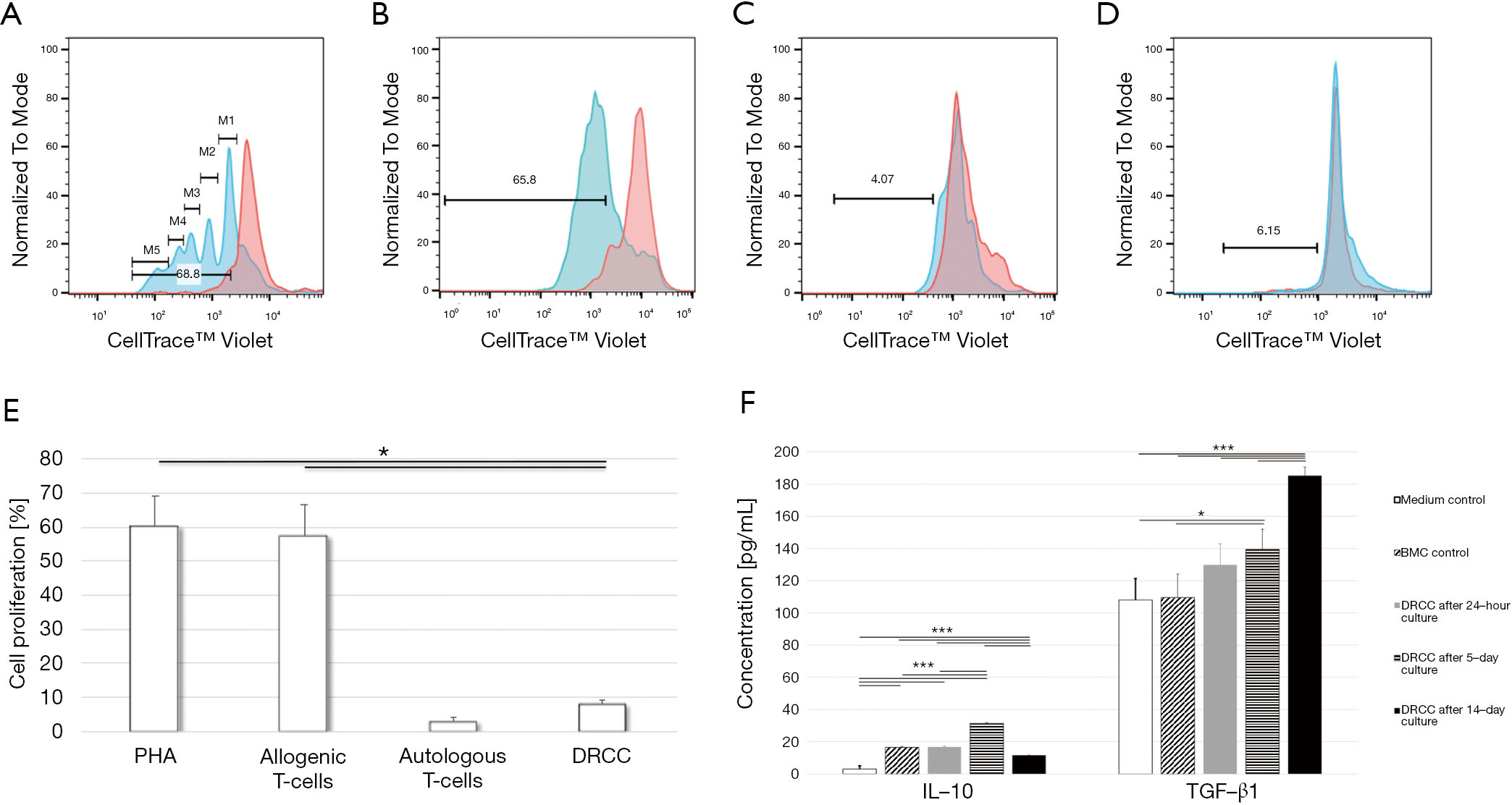 Confirmation of low polyploidy of DRCC

Hoechst33342 indicated that the average percent of tetraploid (4N) DRCC was 3.1%±0.2% compared to isolated BMC (0.96%±0.1%, Figure 4A). The low occurrence rate of multinucleated cells was also detected by confocal microscopy post-fusion (Figure 1B). 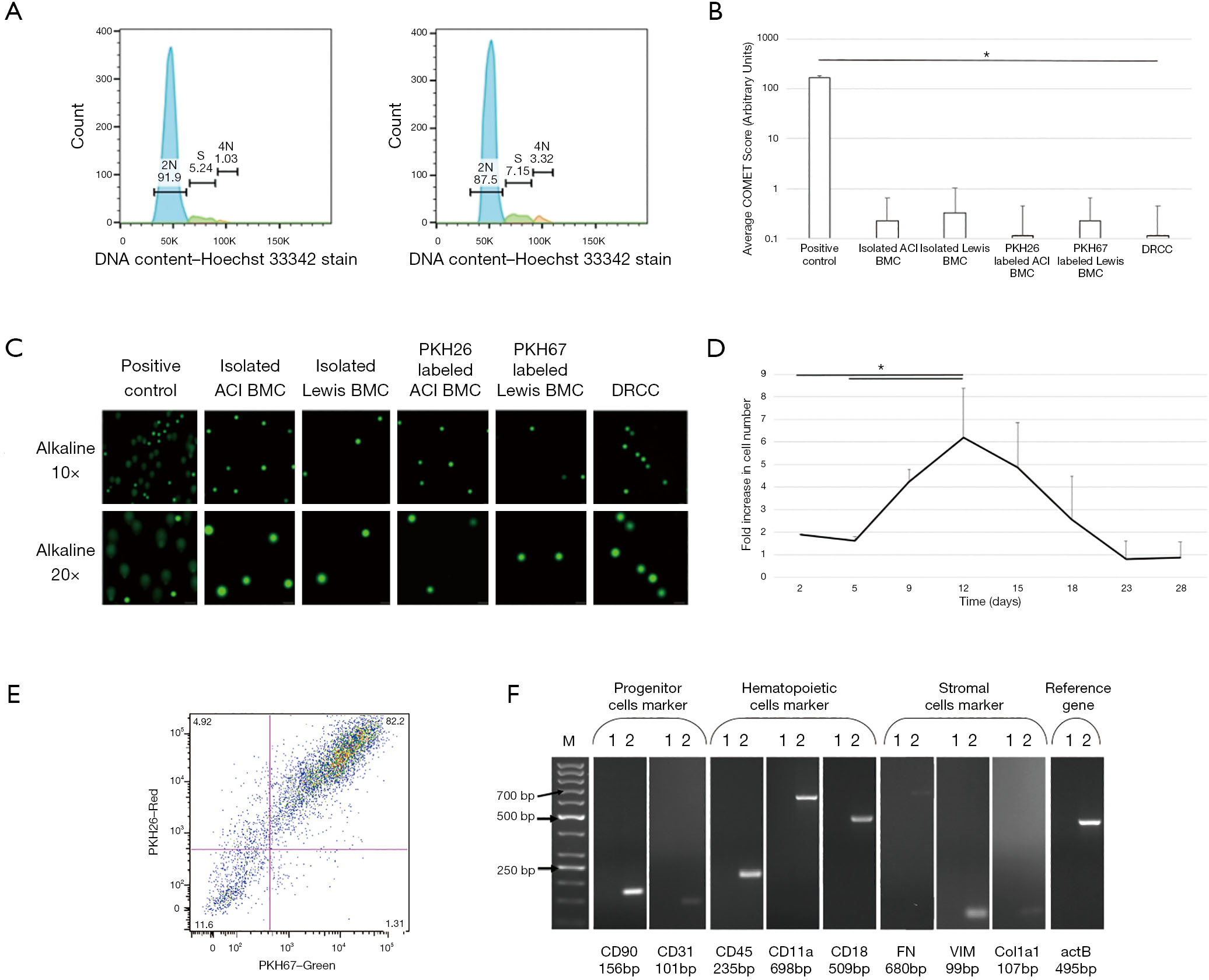 In all of the tested media >80% of DRCC remained non-adherent to the plastic. DRCC survived 14–18 days in the StemSpan® SFEM medium without FBS, 16–21 days in “complete” DMEM and RPMI media and 26–28 days in the enriched StemSpan® SFEM medium. The enriched StemSpan® SFEM medium presented the lowest percentage of necrotic DRCC (13.9%±2.6%, P<0.05) at day 5 of culturing compared to 26.5%±6.8% of necrotic DRCC in “complete” DMEM, 25.6%±1.9% in “complete” RPMI and 33.6%±4.6% in Stemspan® SFEM medium (n=3/group). The DRCC reached plateau at day 12 of culturing which was followed by decrease in the number of cells up to day 28 of the culture (Figure 4D). After 5-day culturing >80% of DRCC presented strong PKH26/PKH67 labeling sufficient to distinguish DRCC from unstained cells (Figure 4E). Strong expression of CD90, CD31, CD45, CD18 and CD11a confirmed preservation of DRCC’s hematopoietic progenitor/stem cell profile (Figure 4F).

Multiple studies described involvement of cell fusion in tissue regeneration (6,12,24,25,32,33) encouraging development of fusion-based cell lines and therapies for research and clinical applications (2,34-40). The presence of donor/recipient cells observed in the clinical BMT studies (41-43) was explained by spontaneous fusion of donor HSC with cells of BMT recipient or by trogocytosis, a process of inter-cellular transfer of membrane patches or proteins (44-47). Trogocytosis modifies function of stem, progenitor and differentiated immune cells (48-51), including transfer of antigens Fc receptors or major histocompatibility complex (MHC) molecules from macrophages to lymphocytes (44,52), capture of recipient’s MHC by donor thymocytes (53,54), and transfer of MHC from recipient’s splenocytes to donor T-cells (55). The presence of hematopoietic cells presenting the donor and recipient MHC class I molecules was observed by Siemionow’s group in a rat BMT model (23,56). These donor/recipient cells created in vivo were used to induce tolerance in a hemiface allotransplantation model. Although, the therapy provided promising results by extending the VCA survival, the technique of obtaining DRCC was not clinically applicable. Thus, we applied ex vivo cell fusion to create DRCC therapy to facilitate allograft-specific tolerance.

In our proof of concept study, the feasibility of cell fusion procedure and creation of DRCC were confirmed based on fluorescence tracing dyes and the presence of genomic MHC class I sequences specific for each BMC donor. We established fusion protocol for DRCC creation achieving 77.7%±9.1% efficiency with >95% purity and >90% viability. As expected, fusion increased the average DRCC diameter but did not affect DRCC circularity.

The increased percentage of Annexin V+/Sytox blue- and Annexin V+/Sytox blue+ DRCC at 24h after fusion compared to BMC controls could have resulted from DRCC processing time, sorting conditions, or application of PEG/DMSO fusion solution (57). However, at day 5 of culturing, the number of early apoptotic DRCC (Annexin V+/Sytox blue-) decreased and was comparable to BMC controls. The recovery of DRCC population and DRCC’s capability for differentiation in vitro were supported by the CFU assay results. This suggests capability of DRCC for engraftment and chimerism induction in vivo. Evaluation of DRCC proliferative potential in long-term cultures indicated that in contrast to hybridoma cells and tumor cell lines presenting uncontrollable proliferation (58,59), DRCC exhibited limited number of cell divisions.

The phenotype comparison between BMC controls and DRCC proved that ex vivo fusion does not change the values of lymphoid and myeloid markers with DRCC characterized predominantly by hematopoietic (CD45) stem/progenitor cells (CD90), expressing myeloid (CD11b/c, OX-82) and B cell markers (CD45RA). This indicates the capability of DRCC to generate multilineage chimerism in vivo comparable to BMT.

DRCC presented significantly lower immunogenicity compared to PHA and allogenic cell controls. Any transplanted cells which are not identical to the recipient, have potential to trigger the recipient’s immune response (63). Thus, despite its’ low immunogenicity, DRCC still may initiate the recipient’s immune response in vivo. Therefore, introduction of short-term IS may be required during in vivo DRCC testing. The immature phenotype of DRCC combined with low immunogenicity and secretion of IL-10 and TGFβ1, confirms pro-tolerogenic profile of DRCC population which suggests that in vivo DRCC may have the ability to avoid the immune cells’ recognition and engraft more efficiently without recipient’s conditioning.

Although PEG is a nonmutagenic compound (64) inhibiting oncogenesis (65,66), the safety of DRCC was assessed based on DRCC ploidy and potential damage to DRCC’s DNA. DRCC presented low frequency of tetraploid cells (4N: 3.1%±0.2%). No multinucleated DRCC (>4N) were observed following fusion procedure. Cells presenting higher DNA ploidy have been reported in studies exploring fusion created tumor cells and were associated with problems with irregular and unrestricted cell proliferation (67). The diploid state of the majority of the DRCC (2N >96%) combined with the lack of synkaryons or polyploidy exceeding 4N adds to the safety profile of DRCC for in vivo application. Moreover, negligible degradation of the DNA material during the visual COMET scoring demonstrated limited genotoxicity of fusion procedure.

Cytokine enriched StemSpan® SFEM medium (28) supported the longest DRCC survival with a six-fold cell number increase. Cytokines were added to the medium to prevent apoptosis and stimulate the symmetric self-renewal of DRCC stem cells in long-term cultures (68-72). Moreover, the enriched medium allowed DRCC to maintain hematopoietic phenotype. Based on the DRCC growth phase, proliferation rate and the peak of the pro-tolerogenic cytokine expression, the 5-day of DRCC culturing was selected as optimal for DRCC harvesting and application as a tolerance inducing therapy.

This study confirmed both, the feasibility of DRCC creation via ex vivo cell fusion as well as highlighted the pro-tolerogenic properties of DRCC in vitro. The pro-tolerogenic DRCC profile in combination with DRCC proliferation and differentiation potential which is comparable to BMC will facilitate engraftment and survival of DRCC in vivo. This proof-of-concept study provides basis for future in vivo testing of the immunomodulatory effects of DRCC therapy in preclinical experimental transplantation models.

This study established and characterized a novel hematopoietic donor/recipient specific DRCC. Due to decreased immunogenicity and pro-tolerogenic cytokine expression, DRCC represent a promising approach as a personalized supportive therapy for the chimerism and tolerance induction in BMT, solid organ and VCA transplantation.

Funding: This work was supported by funding from Department of Defense Armed Force Institute of Regenerative Medicine (AFIRM, W81XWH-08-2-0034).

Reporting Checklist: The authors have completed the ARRIVE reporting checklist. Available at http://dx.doi.org/10.21037/sci-2020-044

Conflicts of Interest: All authors have completed the ICMJE uniform disclosure form (available at http://dx.doi.org/10.21037/sci-2020-044). The authors have no conflicts of interest to declare.

Ethical Statement: The authors are accountable for all aspects of the work in ensuring that questions related to the accuracy or integrity of any part of the work are appropriately investigated and resolved. Experiments were performed under a project license (NO.: 2012-0841) granted by Institutional Animal Care and Use Committee (IACUC) of Cleveland Clinic, in compliance with ‘Principles of laboratory animal care’ formulated by the National Society for Medical Research and the ‘Guide for the care and use of laboratory animal resources’ formulated by the US NIH guidelines for the care and use of animals.