Despite plentiful researches for the handling of ischemic stroke, stroke treatment is still a challenge (1). Although, recently, stem cell therapy has offered hope for stroke recovery, it is doubted that stem cell transplantation alone can effectively improve stroke complications (2,3). For this reason, the combination of stem cell transplantation with other therapeutic approaches has been considered to improve stem cells efficacy. According to existing results, thyroid hormones or exercise (EX) could be helpful to deal with some challenges of stem cells therapy such as cell apoptosis, differentiation of stem cells into neural cells and migration of transplanted cells toward ischemic zone (2,4-9). For that reason, in this study effect of stem cell therapy in combination with triiodothyronine (T3) and EX on astrogliosis after stroke in mice was investigated.

Pathologic situations like ischemia induce reactive gliosis in that the astrocytes become activated and undergo changes including swelling, hypertrophy of cellular processes and hyperplasia. Additionally, expression of glial fibrillary acidic protein (GFAP), known as a speciﬁc marker for astrocytes, increases (10,11).

There is debate about role of astrocytes in exacerbating or limiting stroke complications. In some studies astrogliosis was viewed as an obstacle to stroke recovery, and consequently decrease in astrogliosis was designed as an objective of therapeutic interventions (12-14). On the contrary, other studies have shown that GFAP-positive cells contribute to recovery of brain ischemia (15,16).

Because of importance of astrocytes in stroke pathophysiology, we assessed effect of post stroke treatment with bone marrow stromal cells (BMSCs) with EX and T3 on activation of astrocytes including number of GFAP-positive cells and morphological changes in reactive astrocytes at day 7 after stroke. Since, changes of GFAP-positive cells have obviously been revealed in strokes, knowing correlation between activation these cells with one of the vital variables in clinical situation, neurological deficit, can conduct researchers to find out whether they should stimulate or inhibit reactive astrocytes. Therefore, we assessed whether changes in astrogliosis after treatment with stem cells, T3 and EX is in agreement with improvement of neurological score that we showed in our past study (17). Our previous findings revealed that the treatments including EX, EX + BMSCs and EX + BMSCs + T3 could improve neurological recovery. This study aimed to evaluate effect of combination therapy BMSCs with EX and T3 on stroke-induced astrogliosis in mice.

Stroke was induced by occlusion of the middle cerebral artery. Briefly, after deep anesthesia with ketamine [60 mg/kg intraperitoneal (IP)] and xylazine (10 mg/kg IP), the common and external carotid arteries were ligated and a small incision was made on internal carotid artery. A silicone-coated 8-0 filament (Ethicon, England) was inserted into incision and advanced toward middle cerebral artery origin in order to decrease blood flow to 20% of baseline. Laser Doppler Flowmetry (Moor Instruments DRT4, England) was used to investigate blood obstruction. The middle cerebral artery was obstructed for 45 minutes, and then reperfusion was allowed for 7 days.

Cell extraction and administration was done as we described in our previous study (17). Briefly mouse stem cells isolated from the tibia and femoral marrow compartments were cultured in DMEM medium (Bio-IDEA, Iran) supplemented with 10% fetal bovine serum (FBS) (Gibco, USA) and penicillin/streptomycin (100 U/mL and 100 g/mL) (Sigma, USA). The tissue culture flask was placed in a 5% CO2 humidified incubator (Memmer, Germany) set at 37 °C. Non-adherent cells were removed 24–72 hours later by changing the medium and plastic adherent stromal cells were remained attached to the flask surface. Cell passaging was done when the confluence was more than 80%. BMSCs at passages 3 to 5 were used for transplantation. Under aseptic conditions, 3 µL of cell suspension containing 1×105 BMSCs were injected into the right lateral cerebroventricle (0.9-mm right, 0.1-mm posterior, and 3.1-mm deep relative to the bregma) 24 hours after stroke (18). In PBS group, animals received 3 µL of PBS (Bio-IDEA, Iran) by intra-cerebroventricular route.

EX groups were forced to run on a treadmill (Borj Sanat, Iran) for 30 min daily for six consecutive days, starting 24 h after induction of stroke. The running speed and duration consisted of 3 m/min for 5 min, 5 m/min for 5 min and 8 m/min for 20 min with 0° inclination. Also T3 (Sigma, USA) (20 µg/100 g body weight) was subcutaneously administrated 24 hours after MCAO and continued for 6 consecutive days.

After deep anesthesia, the mice were perfused through the heart with cold saline and paraformaldehyde solution 4% in PBS. Then the brains were isolated and immersed in paraformaldehyde (Merck, Germany) solution 4% in PBS for approximately 1 week. Ten-µm sections were cut coronally from Bregma –1 mm to Bregma +1 mm. Three equal sections of each brain were washed with xylene to remove the paraffin and with graded ethanol to rehydrate. The sections were sequentially incubated in 3% H2O2 in PBS solution for 60 min, 10% goat serum (Sigma, USA), 0.5% Triton X-100, and 0.1% bovine serum albumin (Sigma, USA), in PBS solution for 30 min at room temperature, the primary antibodies (rabbit-anti-GFAP, 1:100, Biorbyt, UK) overnight at 4 °C, the secondary antibody (biotinylated goat anti-rabbit immunoglobulin IgG, 1:100, Biorbyt, UK) for 2 h at room temperature and finally avidin-peroxidase conjugate solution for 1 hour. Staining and counterstaining were respectively performed with 0.05% DAB (Sigma, USA) and hematoxylin (17).

The sections were viewed by light microscope (Reichert microscope, USA) with a ×40 magnification and then number of GFAP-positive cells was counted in a blinded manner in six visual fields per section of each sample.

The Kruskal-Wallis ANOVA on ranks was conducted to compare groups regarding number of GFAP-positive cells. Data were expressed as mean ± SEM. P<0.05 was statistically significant. 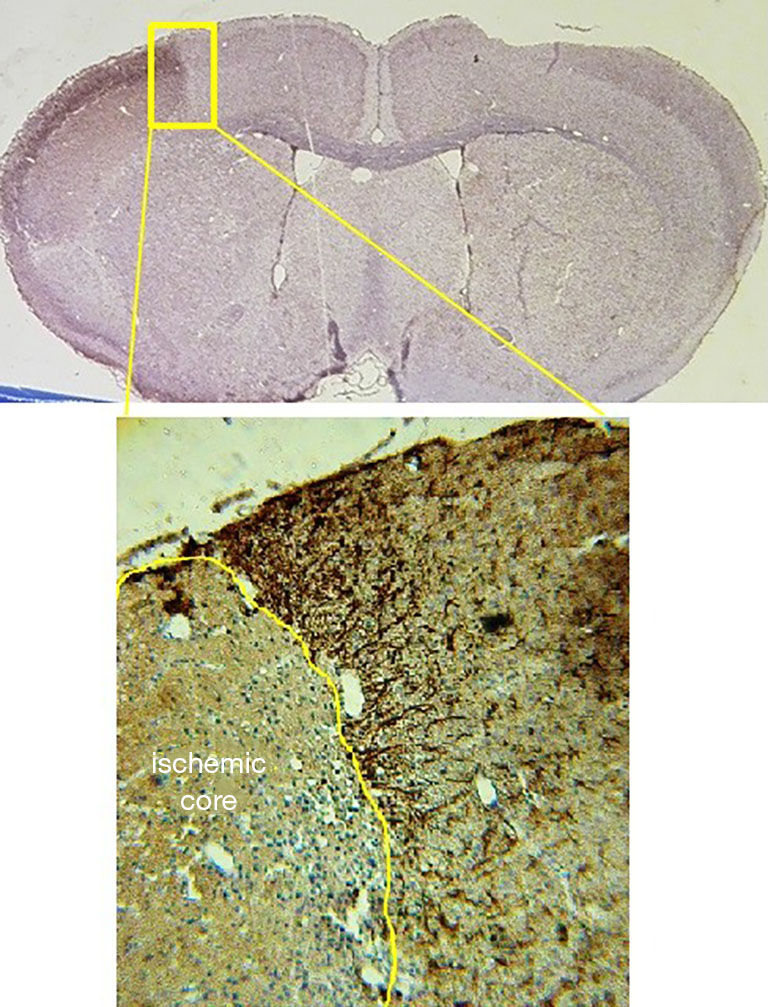 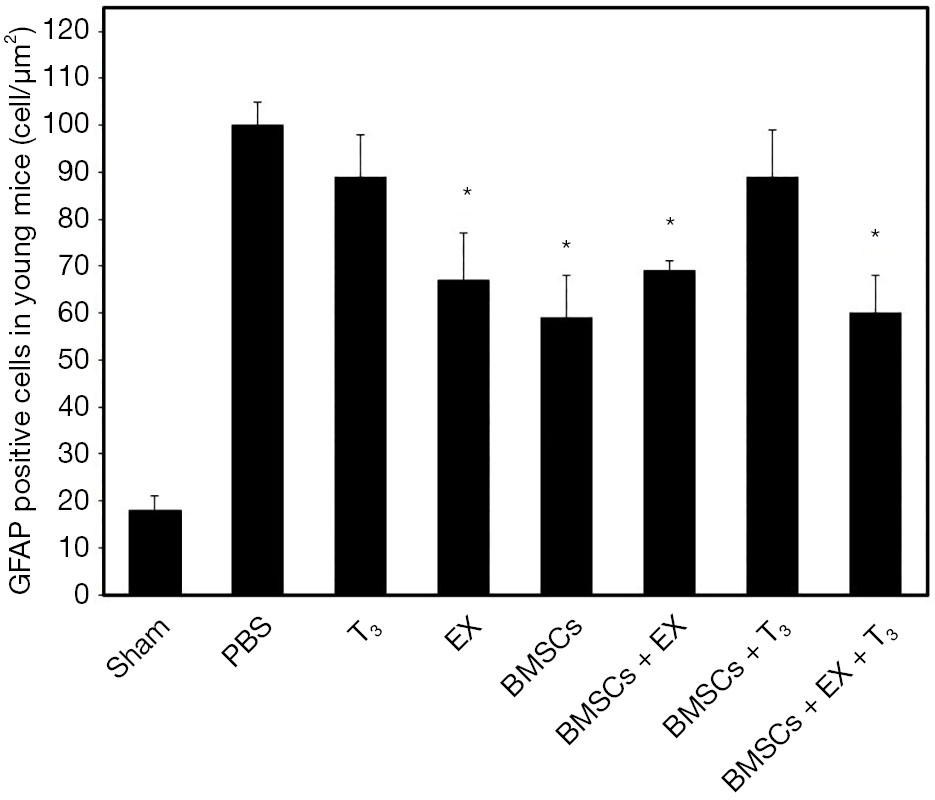 Monotherapies with EX and BMSCs and combination therapies with BMSCs + EX, BMSCs + EX + T3 improve morphological changes in astrocytes. The astrocytes in these groups exhibited smaller cellular bodies and finer processes compared with the PBS group. However, astrocytes in T3 and T3 + BMSCs groups had a large volume, with thick branches (Figure 3).

In present study, consistent with previous reports (10,11), stroke induced an increase in expression of GFAP and morphological changes of astrocytes including hypertrophy and branching. Combination therapy with BMSCs, EX and T3 could significantly decrease reactive astrogliosis. However, monotherapy with BMSCs or EX also improved changes of GFAP- positive cells following stroke.

Present study didn’t show any added effect of combination therapy than monotherapy with stem cell on reactive astrogliosis after stroke. Although existent studies have shown that thyroid hormone and EX probably potentiate BMSCs capacity by increasing survival, maturation, migration and differentiation of stem cells (2,7-9), there was no any additional impact of triplet combination therapy compared to monotherapy with stem cell on GFAP- positive cells.

Present finding showed that EX decreased GFAP expression in ischemic hemisphere at day 7 after stroke. According to the existing studies EX is able to improve stroke recovery by means of various mechanisms such as reduction in inflammation and apoptosis and improvement of angiogenesis and neurogenesis (17,23) and our results was a confirmation on anti-inflammation effects of EX on stroke brain.

Present study showed that there is no statistically significant difference between T3 and control groups with respect to the level of GFAP expression. This finding is somewhat supported by Lee and colleagues study that had found that activations of GFAP+ astrocytes after ischemia/reperfusion were higher in the euthyroid group, compared to hypothyroid group (24). In addition, there are several studies that have showed that thyroid hormone increased GFAP-positive cells and induced morphology changes in astrocyte both in vivo and in vitro conditions (25-27). Since both stroke and thyroid hormone enhance astroglial cells, therefore it is not unexpected that stroke-induced astrogliosis do not improve in monotherapy with T3. In contrast to T3 monotherapy, combination therapy T3 plus stem cells plus EX significantly diminished GFAP expression and Astrogliosis. Although the studies showed that thyroid hormone could amplify stem cell efficacy by improvement of stem cells migration or/and differentiation (8), the effect of combination T3 with stem cell on GFAP positive cell was not more than stem cell alone. Overall, although thyroid hormone could improve stroke recovery by the mechanisms, such as antiapoptotic mechanism (28) and the promotion of endogenous cell proliferation in brain (25), and improve stem cell efficacy by enhancing cell proliferation, migration, and maturation (7-9) our study did not show that monotherapy with T3 impact on stroke-induced astrogliosis.

In our previous study, we have shown that EX alone or in combination with BMSCs, as well combination EX with BMSCs and T3 decreased neurobehavioral deficit.

Conversely, monotherapy T3 or combination T3 + BMSCs couldn’t have therapeutic effect on neurobehavioral deficit. Comparing our past and present surveys revealed that decrease of astrogliosis at day 7 after stroke in EX, BMSCs + EX and BMSCs + EX + T3 groups was consistent with significant improvement of neurobehavioral deficit. Conversely, administration of T3 alone or in combination with BMSCs influence neither astrogliosis nor neurological outcome. Therefore our results are to some extent in an agreement with studies that have shown that reactive astrocytes were related to poor stroke recovery and consequently the decrease in astrogliosis was correlated with recovery neurological deficit (12,29-31). Since reactive astrocytes result in exacerbation of inflammatory response, neuronal cell death (31), and forming a physical or chemical barrier to axonal regeneration (15), it seems that discovering new compound to decrease stroke-induced astrogliosis could be helpful in stroke treatment. However, treatment time to decrease astrogliosis is important because it has been shown that inflammatory responses after acute phase of stroke may help to stroke improvement (32).

In conclusion, combination therapy BMSCs with EX and T3 didn’t have an added effect on astrogliosis compared to monotherapy with BMSCs or EX. Comparing present finding with our former results to some extent showed that astrogliosis at day 7 after stroke was related to severity of neurological deficit. Therefore, it seems that decrease of astrocytes at this time could help to stroke recovery, although further researches are needed.

We would like to thank Dr. Hamid Reza Sameni and Dr. Ali Rashidpour, for all their help and guidance.

Conflicts of Interest: Both authors have completed the ICMJE uniform disclosure form (available at http://dx.doi.org/10.21037/sci-2020-031). Both authors report grants from Iran National Science Foundation (INSF), during the conduct of the study.

Ethical Statement: The authors are accountable for all aspects of the work in ensuring that questions related to the accuracy or integrity of any part of the work are appropriately investigated and resolved. All experiments were performed in accordance with relevant guidelines and regulations. The study was approved by the Research Ethics Committee of Semnan university of medical sciences and health services (ethical code number: 93.475925) and national policy for approaching animal research.