Mesenchymal stem cells (MSCs) have the ability to differentiate into several types of cells including adipocyte, chondrocyte, osteocytes and hold promise for application in regenerative medicine (1,2). The source of MSCs that many studied and reported is from bone marrow which well known as bone marrow stem cells (BMSCs) and/or lipoaspirate which is known as adipose-derived stem cells (ADSCs) (3,4). However, human adult BMSCs is known to be painful, invasive, and low cell number upon harvesting compared to ADSCs (5). ADSCs as a cell source support many studies to discover nature of adult stem cells including their stemness towards physical stress such as post freeze-thawed processes.

To use MSCs for regenerative treatment, usually the cells are cryopreserved in liquid nitrogen (6-8). However, freeze-thawed cells decreased their viability and physiology of cells. To maintain their potential and hold aging processes, ascorbic acid might be as an alternative solution to suppress senescence due to their ability to suppress reactive oxidative stress (9). Ascorbic acid can increase the proliferation rate of cell during in vitro culture (10,11).

The study was conducted in accordance with the Declaration of Helsinki (as revised in 2013). The liposuction protocol was approved by the Ethical committee of Dharma Nugraha Hospital (No. 001/SkeI-Kom/RSDN/I/2020) and informed consent was taken from the participant.

Subcutaneous adipose tissue from abdomen was obtained from one donor undergoing liposuction procedure with age of 46. Isolation of stromal vascular fraction was followed H-Remedy protocol (12) which involved enzymatic process, and incubation at 37 °C, 300 rpm, 1 hour. Isolated cells then cultured to expand the cells using in house media then cryopreserved in several tubes. The cells that we used in this study were post-thawed cells. The cells were thawed and cultured in DMEM (Gibco, USA) only for control with seeding density 1,275 per cm2, DMEM with 10% FBS (Biowest, USA), and 1% antibiotic-antimycotic (ABAM) (Gibco, USA) for DMFA group, and DMFA with 50 and 100 µg/mL of LAA2P for ascorbic acid groups. The cells were cultured at 37 °C in 5% CO2, and the medium was changed every 3 days.

In this study, we compared the effect of ascorbic acid supplementation towards post-thawed cells recovery. The control was DMEM only while DMEM with 10% FBS and 1% ABAM was DMFA group, while DMFA with 50 µg/mL LAA2P and DMFA with 100 µg/mL LAA2P were ascorbic acid groups. The observation was conducted at 1, 3, 6, 24, 48, 96, 144, 168, 240 h using inverted microscope (OPTICA microscope) (objective 10×). The cell spread size was calculated using ImageJ program.

The cells in treatment groups were harvested on day 5. RNA isolation, synthesis cDNA and mRNA expression analysis were performed by SV Total RNA Isolation System (Promega, USA) and GoTaq® 2-Step RT-qPCR System (Promega, USA) following manufacturer instruction. The mRNA expression was type 1 collagen and glyceraldehyde-3-phosphate dehydrogenase (GAPDH) as gene reference (Table 1). The cycle conditions were an initial denaturation step of 95 °C for 2 min, followed by 40 cycles of denaturation at 95 °C for 15 s, and annealing at 54.4 °C for 1 min, and a final extension at 60–95 °C for 5 s. The result of qPCR was analysed following the 2–ΔΔCT method described by Livak and Schmittgen. 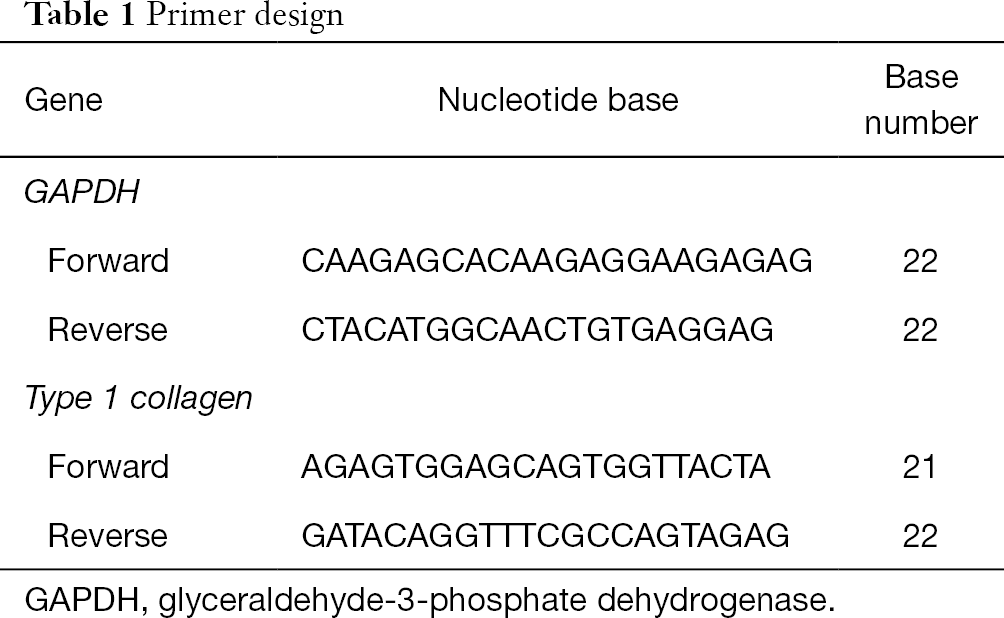 After 1-hour incubation at 37 °C, the cells did not show spreading sign while after 24 hours of incubation, all of the group including control which cultured in basal medium (DMEM only) was spread (Figure 1). The maximum spreading of control group was shown after 96 hours of incubation then cells were detached. In contrast, medium supplemented by serum with or without ascorbic acid showed the cells proliferated. The cells cultured in basal medium (DMEM) showed spread curve of cells with the highest peak shown after 96 hours of observation then continued to sharply decreased indicated the cells died (Figure 2). 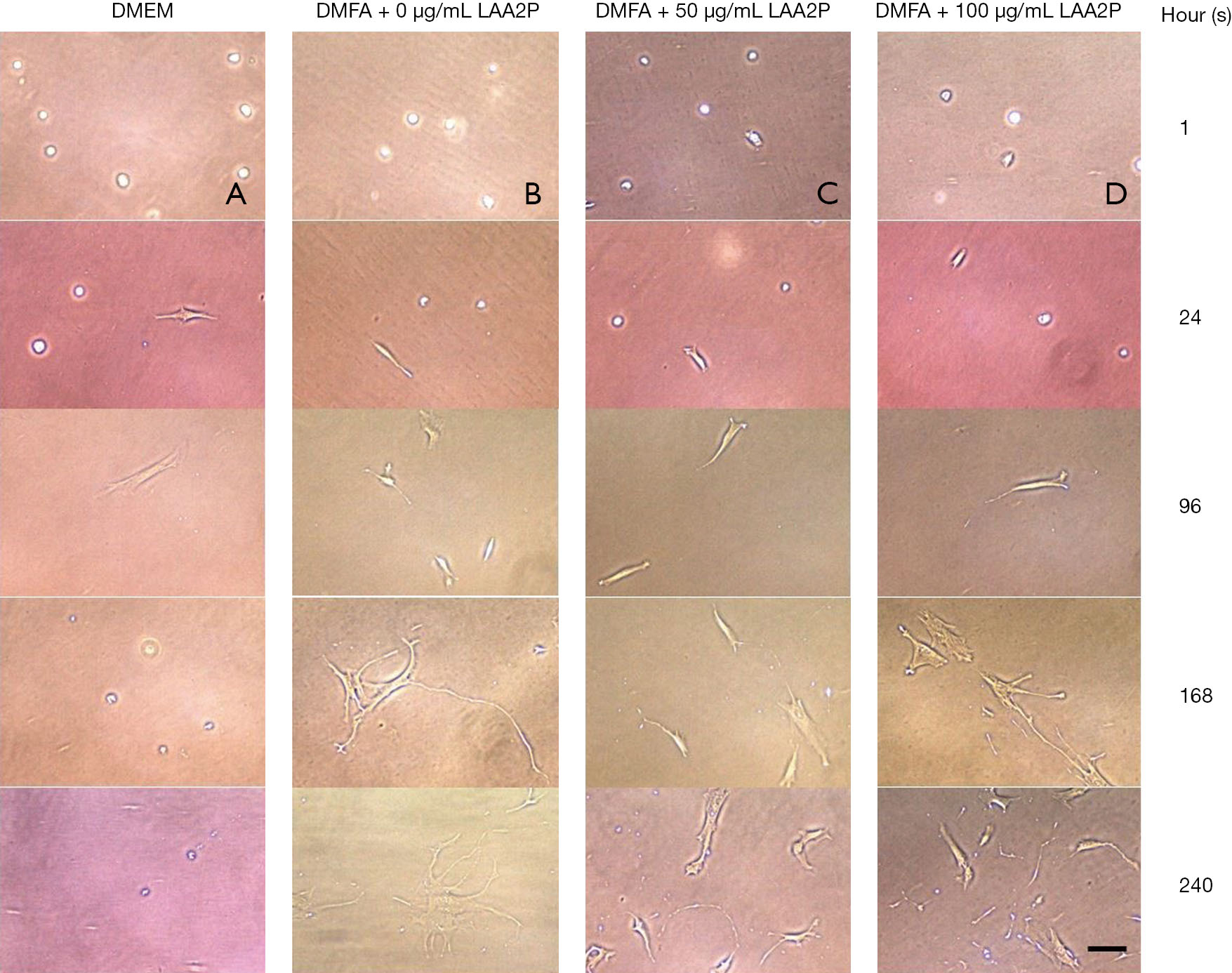 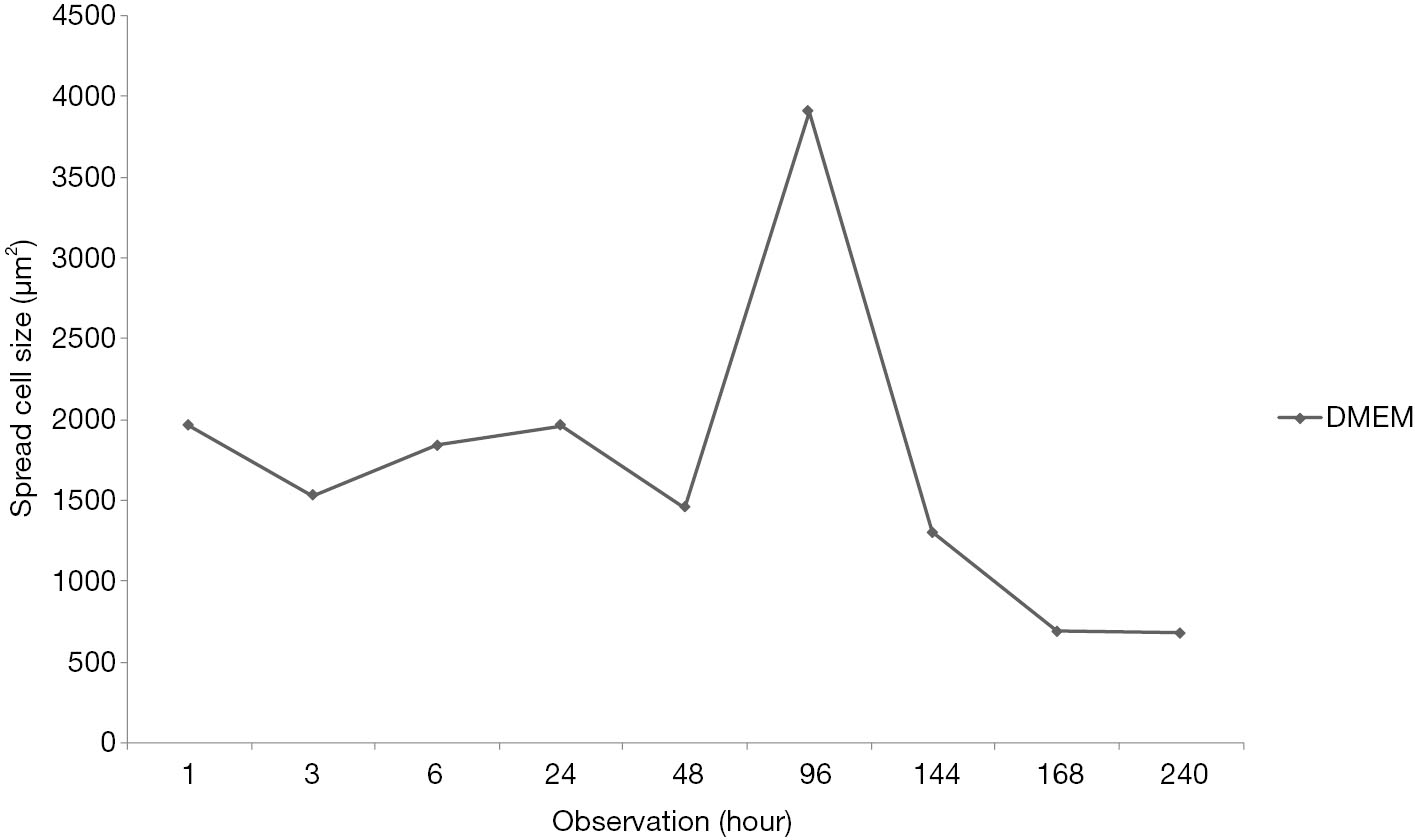 The spread size of cell without ascorbic acid supplementation showed had the largest spreading cell in average at 240 hours of observation (Figure 3). However, ascorbic acid maintains the proper size of the cells. Interestingly, the proper concentration of ascorbic acid also has a role in yield outcome (Figure 4). 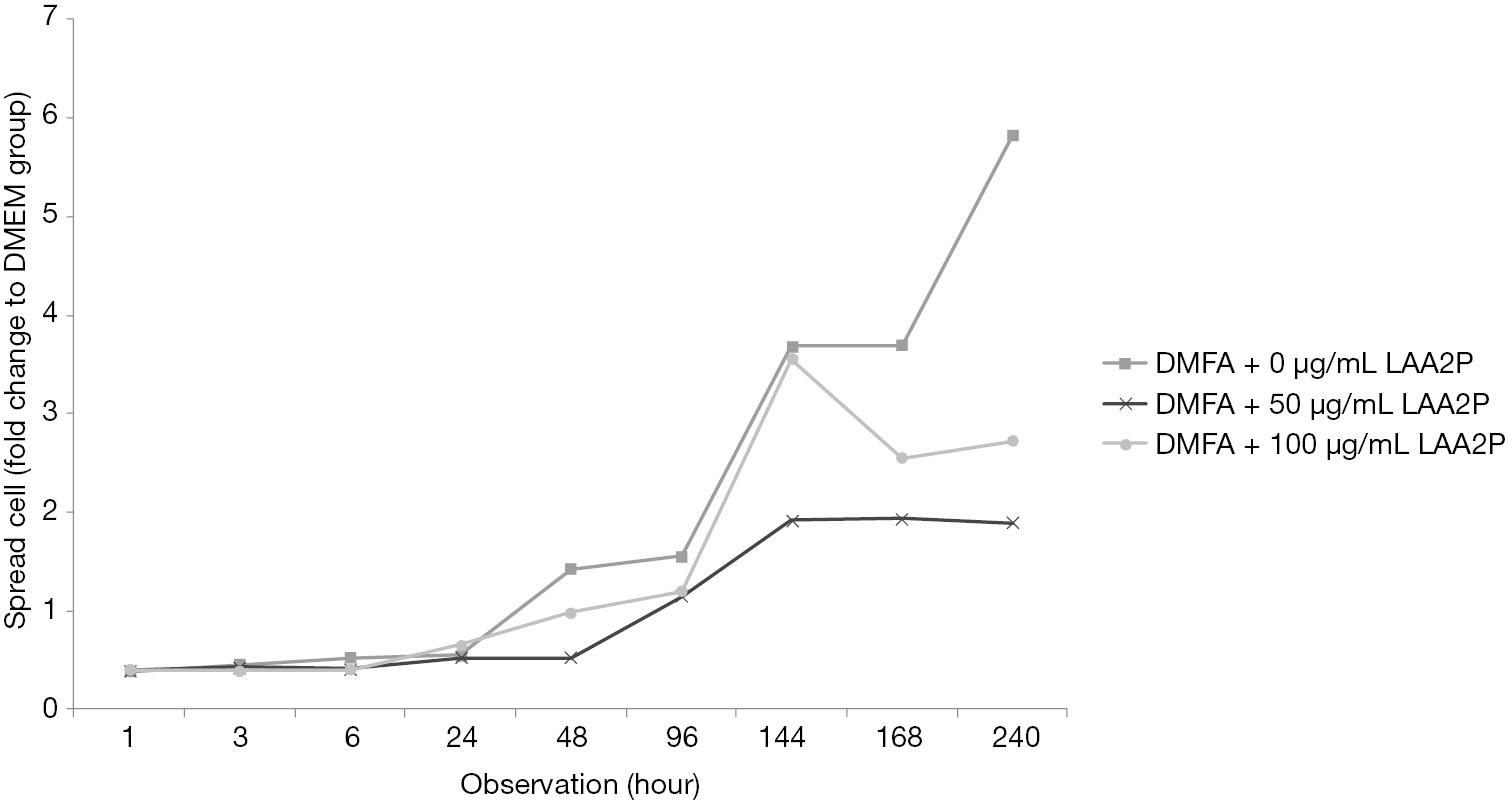 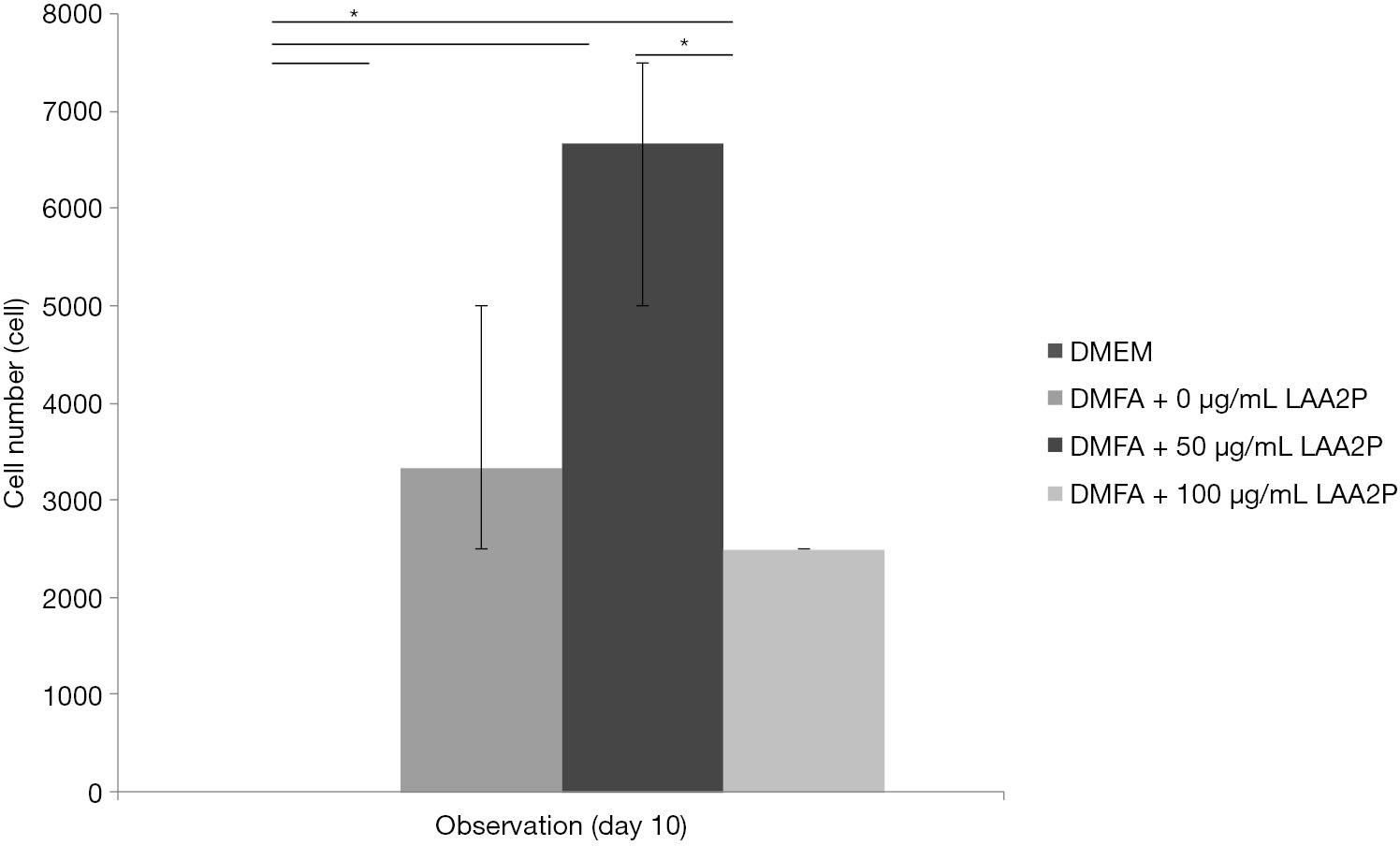 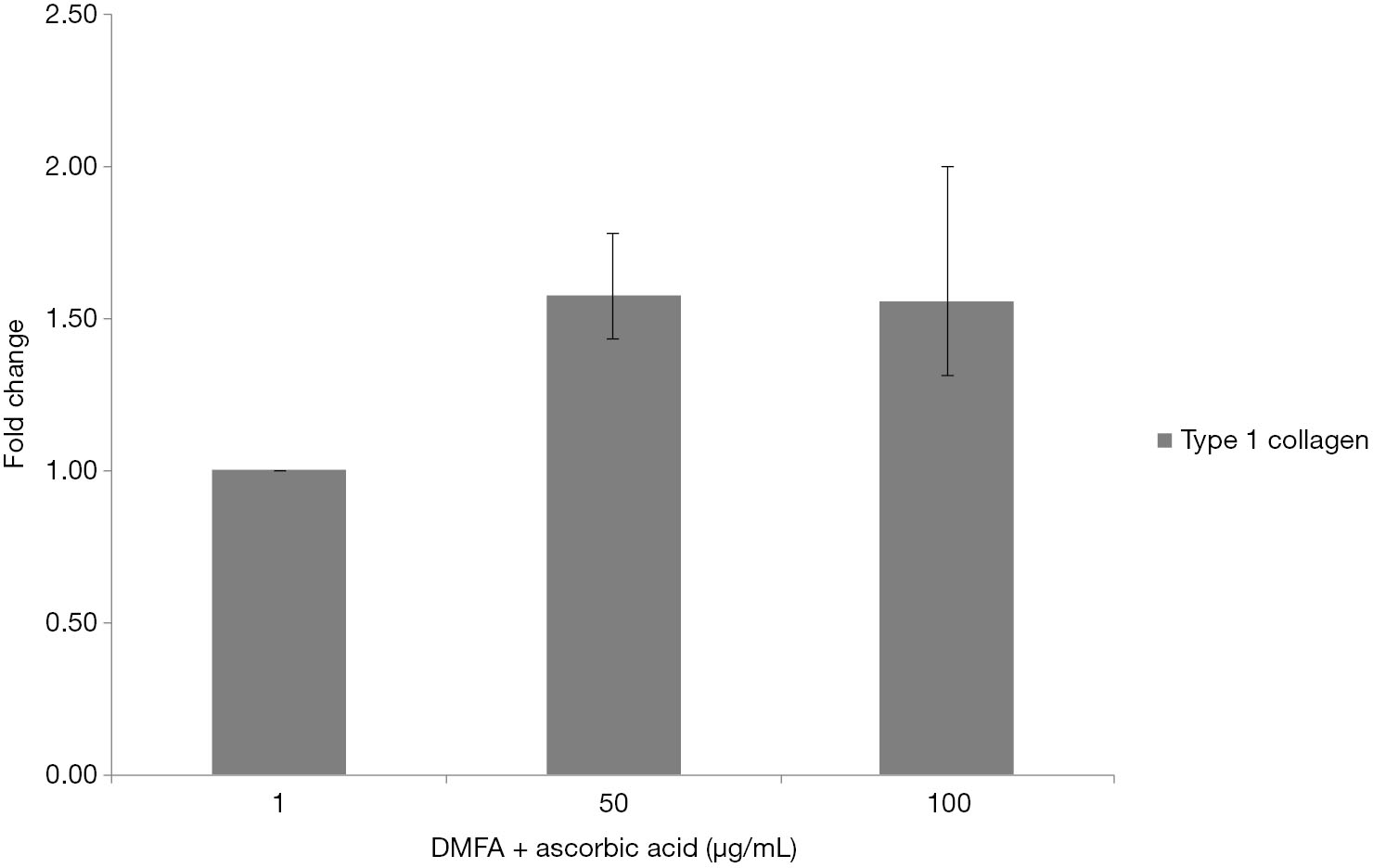 Figure 6 Illustration of cell attachment, less than 24 hours some cells were in a half spread (A); continues with spreading in average size compared to control (B), over spreading of cell was observed in group of DMFA without ascorbic acid supplementation (C).

In this study, post-thawed cells exhibited fibroblast-like shape and adhered to the plastic culture flask. It was characterized by cell morphology with filopodia on the surface that depended on the cell adhesion mechanism (13). Cryopreservation does not affect MSCs morphology, surface marker expression, differentiation or proliferation potential (14). However, additional various concentrations of ascorbic acid in medium might show different results. Ascorbic acid could be used as an alternative cardiomyogenic inducing factor for human amniotic fluid MSCs (15). Ascorbic acid also supports BMSCs proliferation and promotes HIF1α breakdown as well as activates mitochondria, affecting cell proliferation and metabolism. A deficit of ascorbic acid in the culture medium decreases the activity of ascorbic acid-dependent enzymes (9).

The spreading size of cell in DMEM medium continuously increased during 1 hour of observation. After that, the highest spreading cell in size had been observed after 96 hours of incubation. This highest peak of spreading cell was used as a standard to other groups which contained serum and ascorbic as well. Comparable effect of FBS only versus their combination with ascorbic acid was reported by Rosadi et al. (16) showed that in 1% ascorbic acid, the spread size of cells was smaller than control. The highest spread size of the cells and repeated cell division known as Hayflick phenomenon is a sign of senescence (17). Ascorbic acid has a role of multiple physiological functions involved in cell division and suppresses aging (18).

Medium supplementation with ascorbic acid increased proliferation rate and markedly increased number of cell doublings before reaching senescence, with a greater than 1,000-fold increase in total cell numbers compared with control cultures (19). In this study, there was increased yield in the cell with 50 µg/mL of ascorbic acid compared to other groups. In contrast, higher concentration of ascorbic acid (100 µg/mL) showed decreased in yield. It is suggested that ascorbic acid has negative feedback towards its concentration. Wu et al. (20) reported that the dose-dependent effect of ascorbic acid-induced oxidative cytotoxicity and its negative correlation with higher seeding density and smaller intercellular distance. In addition to the enhanced recruitment of anti-oxidative capabilities with more cells in high-density culture conditions, higher seeding density also exerted a defensive effect against the ascorbic acid-induced oxidative stress by enhancing the expression of anti-oxidative enzymes. Other studies reported that supplementing ascorbic acid in high concentration increased intracellular reactive oxygen species levels via the production of hydrogen peroxide (H2O2) (21,22). Thus, ascorbic acid can inhibit GAPDH and induce apoptosis (23,24). In addition, reduction of type 1 collagen expression increased ageing damages on human dermal fibroblast (25). In this study showed that ascorbic acid increased type 1 collagen on human ADSCs and suppressed ageing processes.

We demonstrated that adding ascorbic acid in proper concentration as supplementation might help cell to suppress their senescence processes and increase proliferation rate. Furthermore, the result of cell harvested demonstrated that ascorbic acid also increased the cell proliferation rate proved by highest yield counted. However, at present, the sample size and molecular side study is limited to be conducted. Therefore, further studies are required to increase sample sizes and conduct the molecular study to improve the results.

In conclusion, serum with ascorbic acid (50 µg/mL) could be considered as an effective dose to suppress aging on post-thawed cell morphology represented by the smaller spread cell size compared to control.

Conflicts of Interest: All authors have completed the ICMJE uniform disclosure form (available at http://dx.doi.org/10.21037/sci-2020-011). The authors have no conflicts of interest to declare.

Ethical Statement: The authors are accountable for all aspects of the work in ensuring that questions related to the accuracy or integrity of any part of the work are appropriately investigated and resolved. The study was conducted in accordance with the Declaration of Helsinki (as revised in 2013). The liposuction protocol was approved by the Ethical committee of Dharma Nugraha Hospital (No. 001/SkeI-Kom/RSDN/I/2020) and informed consent was taken from the participant.