Stem cells are undifferentiated cells characterized by two criteria: (I) a potential to self-renewal and (II) a potential to differentiate into multiple mature cell types. There are two broad categories of stem cells, embryonic and adult ones. Adult stem cells can be further subdivided into hematopoietic and mesenchymal stem cells (MSCs). MSCs are characterized as conductors of tissue repair and regeneration, by secreting trophic mediators (2). Therefore, MSCs are probably the most interesting for orthopaedic applications because of their potential to differentiate to both bone and cartilage (1,2). MSCs can be isolated from various sources in the human body, such as bone marrow, adipose tissue, skin and skeletal muscle. Among these, bone marrow and adipose tissue derived MSCs are most commonly used, as they are easily obtained and abundantly available. Bone marrow derived MSCs (BM-MSCs) are currently considered the gold standard and the main source of MSCs for clinical applications in orthopaedics (3).

The challenge in orthopaedics focuses on repairing or regenerating damaged or diseased musculoskeletal tissues. MSCs are the most commonly used stem cells and are able to give rise to diverse tissues, including bone, cartilage, tendon, ligaments and muscle (2). These cells can be isolated from bone marrow and under controlled conditions; they can differentiate into fibroblast, chondrocyte, osteoblast and myoblast, making them useful for cell and tissue engineering for orthopaedic applications (3).

Traditionally, the iliac crest represents the most common source of MSCs for clinical applications in orthopaedics (4-7). Recently, several reports have shown that these cells are also present in bone marrow from the proximal and distal femur (4,7,8), proximal and distal tibia (4,6,7), vertebral body (5), calcaneus (6), and humeral head (9). As for the iliac crest, a thorough literature search revealed that the ilium is the preferred donor site for obtaining autologous stem cells. The harvesting of bone marrow from the posterior iliac crest appears to be preferred, as it provided a modestly higher concentration of nucleated cells [(25.1–54.7) ×106 cells/mL], while the anterior iliac crest had a mean concentration of [(24.4–49)×106 cells/mL] (10,11) (Figure 1). Although, the differences are not statistically significant, it should be noted that the slight excess of posterior iliac crest could be relevant and may be due to aspiration techniques of each anatomic site. 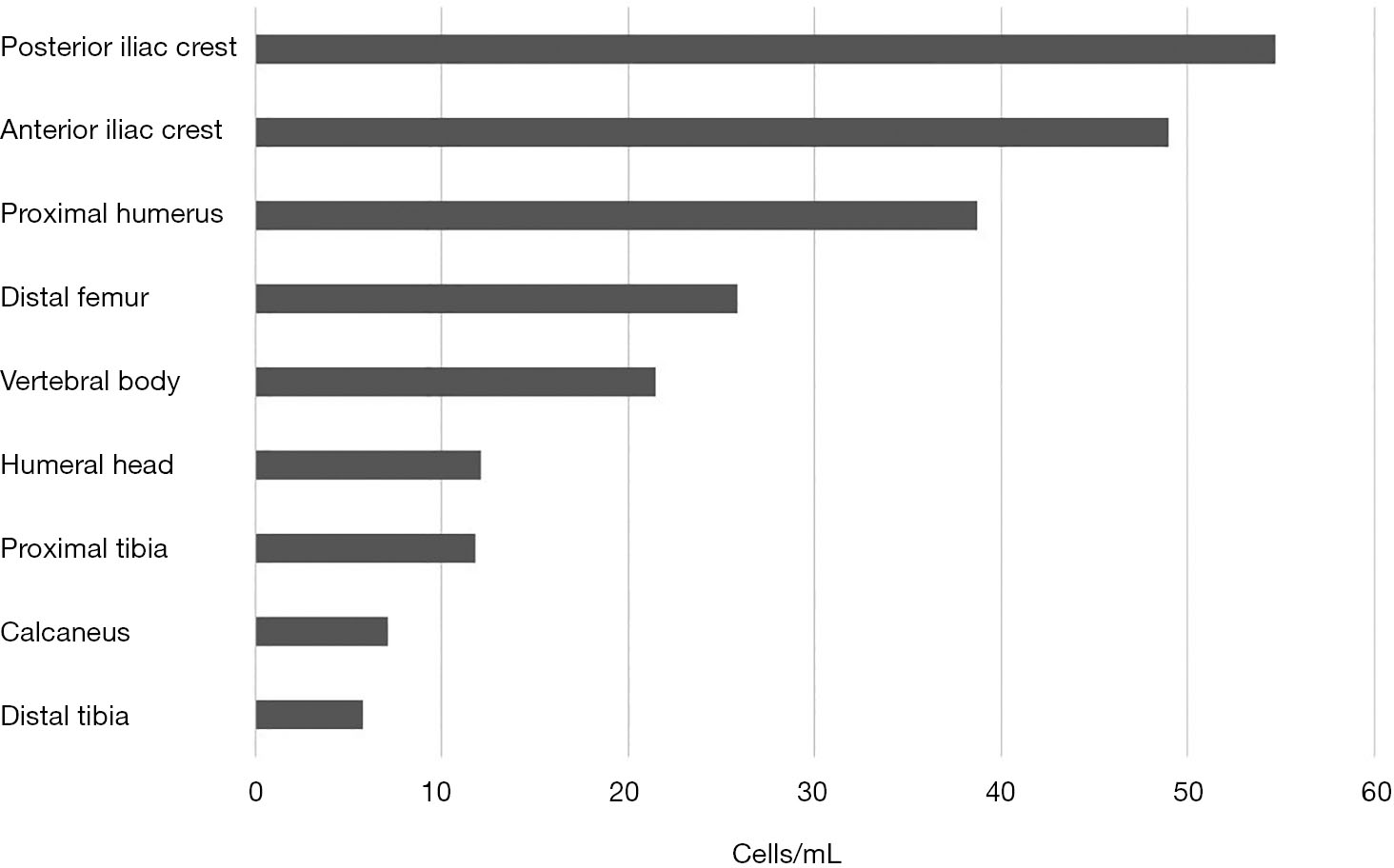 Some studies have demonstrated other anatomical locations and have tried to identify the most appropriate location for sourcing MSCs. Beitzel et al. (12) compared bone marrow aspirates from the proximal humerus and distal femur during arthroscopic surgery. The mean number of 38.7×106 cells/mL was reported from samples from the proximal humerus, while 25.9×106 cells/mL for samples from the distal femur. Mazzocca et al. [2011] studied bone marrow of the humeral head from patients undergoing arthroscopic rotator cuff repair and found that the mean nucleated cells concentration was 12.1×106 cells/mL (9), which is comparable to nucleated cells observed in the literature for the iliac crest and vertebral body (5,6) (Figure 1).

Direct comparison of amounts of isolated cells between different previously published studies may be difficult, since the differences in methods of isolation, culture times and differentiation media used, result in very diverse outcomes. Narbona-Carceles et al. [2011] (20 patients; mean age, 70.9 year; undergoing total knee arthroplasty) were able to isolate (5.95±2.1)×105 MSCs/mL from iliac crest samples, (2.9±6.6)×105 MSCs/mL from distal femur samples and (3.25±2.6)×105 MSCs/mL from proximal tibial samples (4). Juneja et al. [2010] (28 patients undergoing total hip arthroplasty and 10 patients undergoing total knee arthroplasty; age group 55–65 years) showed the viable MSCs in proximal and distal femur as (4.1±0.72)×106 and (2.56±0.69)×106, respectively (8). Hence, comparing the two studies for distal femur, there was no evidence of any major difference. Although, based on their data, Juneja et al. [2010] strongly recommended proximal femur as the preferred source for bone marrow collection, because of higher volume of blood that can be aspirated from this site, when compared to distal femur (8).

Modern strategies of tissue engineering and regenerative medicine utilize MSCs to improve bone repair and regeneration. They have been extensively studied because of their ability to differentiate into multiple cell types and their potential to increase osteoinduction and osteogenesis in bone repair (1,10). Their outstanding capabilities rendered BM-MSCs widely applicable to regenerative medicine for the purpose of repairing and replacing damaged tissues. The major advantages of BM-MSCs are that they are an accessible source of cell harvesting, have high stability in culture, are ease of preparation and present high affinity to differentiate into osteoblastic lineage (1,3).

Concluding, clinical studies have shown that BM-MSCs can be harvest safely from different bone sources (5,6,9,11). Originally, BM-MSCs were isolated from the iliac crest. This used to be the preferable source of MSCs for orthopaedic knee and shoulder surgeries (4,10,11). However, this acquisition process is quite painful for the patient and also increases the risk of infection in bone tissue. In recent literature, various studies have described aspiration techniques (knee, shoulder and spine surgery) to harvest bone marrow during arthroscopic surgery and spine fusion without significant increases in operating time or patient complications and even re-injected to the repair site of the same patient to augment healing (9,12,13). According to the International Society for Cellular Therapy, the minimum criteria for MSCs included plastic adherence, specific surface antigen expression and multipotent differentiation potential into adipocytes, osteoblasts and chondroblasts (14). Hopefully, the proximal humerus, distal femur and vertebral body aspiration yielded consistent volumes of bone marrow and nucleated cells comparable to aspirated from the iliac crest and were capable of undergoing differentiation into bone cells (9,10,12).

Conflicts of Interest: Both authors have completed the ICMJE uniform disclosure form (available at http://dx.doi.org/10.21037/sci-2020-013). The authors have no conflicts of interest to declare.