Mature human adipocytes possess a large, single lipid droplet and are considered to be in the terminal stage of differentiation. They have lost their proliferative ability and are stationary. Adipose stem cells that reside within the stromal vascular fraction of adipose tissue, however, encode transcription factors that suppress differentiation and allow stem cells to continue to proliferate while remaining poised to develop into cells of multiple lineages. Mesenchymal marker proteins are used to identify and characterize multipotent stem cells that can undergo this differentiation. We have isolated adipose-derived stem cells (ADSC) and characterized them using stem cell markers (1). Further, we show that in vitro differentiation of ADSC derived from lean and obese have distinct gene profiles (2).

Normal human cells have a limited replicative capacity and enter senescence. Normal cells lose 50-100 bp from their telomere ends in the chromosomes and this may lead to senescence. Telomerase maintains chromosome length by synthesizing and adding six nucleotide repeats at the end of telomeres (3). Immortalized cells and cancer cells have longer telomeres. Cells undergoing senescence have shorter telomeres. Increased telomerase activity is associated with unlimited growth potential and is routinely associated with cancers. Telomerase, a ribonucleoprotein complex, is made up of two essential components: the human telomerase RNA (hTR) which serves as a transcription template and human telomerase reverse transcriptase (hTERT) which is the catalytic subunit of telomerase and its expression controls enzymatic activity. hTERT (4) has at least 15 splice variants; however α+/β+ variant codes for the full length hTERT. hTERT splicing is tissue-specific and also depends on age (5).

Obesity changes the genetic profile of its stem cell niche. The adipocytes in obese patients reflect hyperplasia and hypertrophy. We recently published that differentiating pre-adipocytes from obese ADSC are resistant to apoptosis (2). Protein kinase C delta (PKCδ) is a serine/threonine kinase which plays a central role in apoptosis. It’s alternatively spliced variants PKCδI and PKCδVIII play opposing roles in apoptosis: PKCδI promotes apoptosis while PKCδVIII promotes survival (6). We showed that PKCδVIII expression is increased in obese adipocytes. Here, we determine the relationship between a survival kinase PKCδVIII and hTERT expression in adipose derived stem cells from a lean and obese subject.

The lean and obese ADSC were purchased as cryopreserved cells from ZenBio™ (Research Triangle Park, NC, USA). Since these commercial cell lines and their information are publicly available, they are exempt from human subjects research determination from internal review board (IRB) in accordance with HHS regulation at 45 CFR Part 46. The lean ADSC originated from subcutaneous adipose tissue of a healthy donor 26 years of age undergoing elective surgery with a body mass index 21.3. An additional obese ADSC originated from subcutaneous adipose tissue of a de-identified donor undergoing elective surgery with a body mass index 48. The sample was obtained under IRB approved exemption (#108360, University of South Florida) and the adipose stromal vascular fraction was isolated as described in our previous publication (1). The ADSC lines were tested in culture to differentiate into mature adipocytes and show accumulation of lipid and secrete adiponectin and leptin. At the start of all experiments, cells are grown to confluency such that all cells are synchronized and then differentiated. The cells were cultured as follows. Briefly, cryopreserved preadipocytes were passaged with preadipocyte medium (PM-1; DMEM/Ham’s F-12 medium, HEPES, FBS, penicillin, streptomycin, amphotericin B; Zen-Bio) and then plated 40,625 cells/cm2 with PM-1. Cells were fed every other day with PM-1 until confluent. To induce differentiation, PM-1 medium was replaced with differentiation medium (DM2; Zen-Bio) including biotin, pantothenate, human insulin, dexamethasone, isobutylmethylxanthine and a PPARγ agonist (days 0-7). After 7 days, DM-2 medium was removed and cells were incubated for an additional 7 days with Adipocyte Medium (AM1; Zen-Bio; days 7-14), which included PM-1, biotin, pantothenate, human insulin and dexamethasone. By day 14, cells contained large lipid droplets and were considered mature adipocytes. Cells were maintained at 37 ℃ in a humidified 5% CO2 atmosphere.

ADSCs were trypsinized and cell pellets were collected in 100 µL Nucleofector® solution (Lonza) and combined with plasmid DNA (2 µg). The cell/DNA solution is transferred to a cuvette and the program started (0.34 kV, 960 microfarads), 500 µL of medium is added immediately and cells are gently transferred to 60 mm plates and allowed to differentiate.

We used TRAPeze kit from Chemicon (catalog number S7700). Briefly, the cells were suspended in 1× CHAPS lysis buffer. In separate tubes, the positive control was suspended in 1× CHAPS buffer. Following telomerase extension at 30 ℃ for 30 minutes, PCR is performed using the TS primer (substrate oligonucleotide) and TRAP primer mix provided in the kit. Following 30 cycles of PCR amplification, the samples were separated on PAGE gel and bands detected by silver staining.

ADSC were grown in 60 mm plates. Cells were washed with 1× PBS and fixed with 1× fixative solution (20% formaldehyde, 2% glutaraldehyde in 10× PBS) for 15 minutes at room temperature. Cells were rinsed and 1 mL of β-galactosidase staining solution (400 mM citric acid/sodium phosphate, 1.5 M NaCl, 20 mM MgCl2, 500 mM potassium ferrocyanide and 20 mg/mL X-gal in DMF) was added to cells and incubated overnight in a dry incubator. The images were captured brightfield on a Nikon Eclipse fluorescent microscope using 4× or 10× objective with 0.38/µM pixel.

We isolated subcutaneous ADSC from a morbidly obese patient (1), characterized its stem cell markers and differentiated them to adipocytes in vitro. We obtained subcutaneous ADSC from a lean subject (ZenBio) and simultaneously differentiated them into adipocytes. Differentiation was initiated when the preadipocytes were 100% confluent. By day 7, mature adipocytes were formed and were maintained in adipocyte media. Since our previous results indicated that obese adipocytes were resistant to apoptosis (2), we measured the telomerase protein in differentiating lean and obese preadipocytes. We observed an increase in telomerase in differentiating obese ADSC using western blot analysis compared to lean on days 0, 4, 8 (Figure 1). Obese samples showed increased levels of PKCδVIII on day 0. This increase was concurrent to the increase in PKCδVIII expression reported previously by our lab (2). 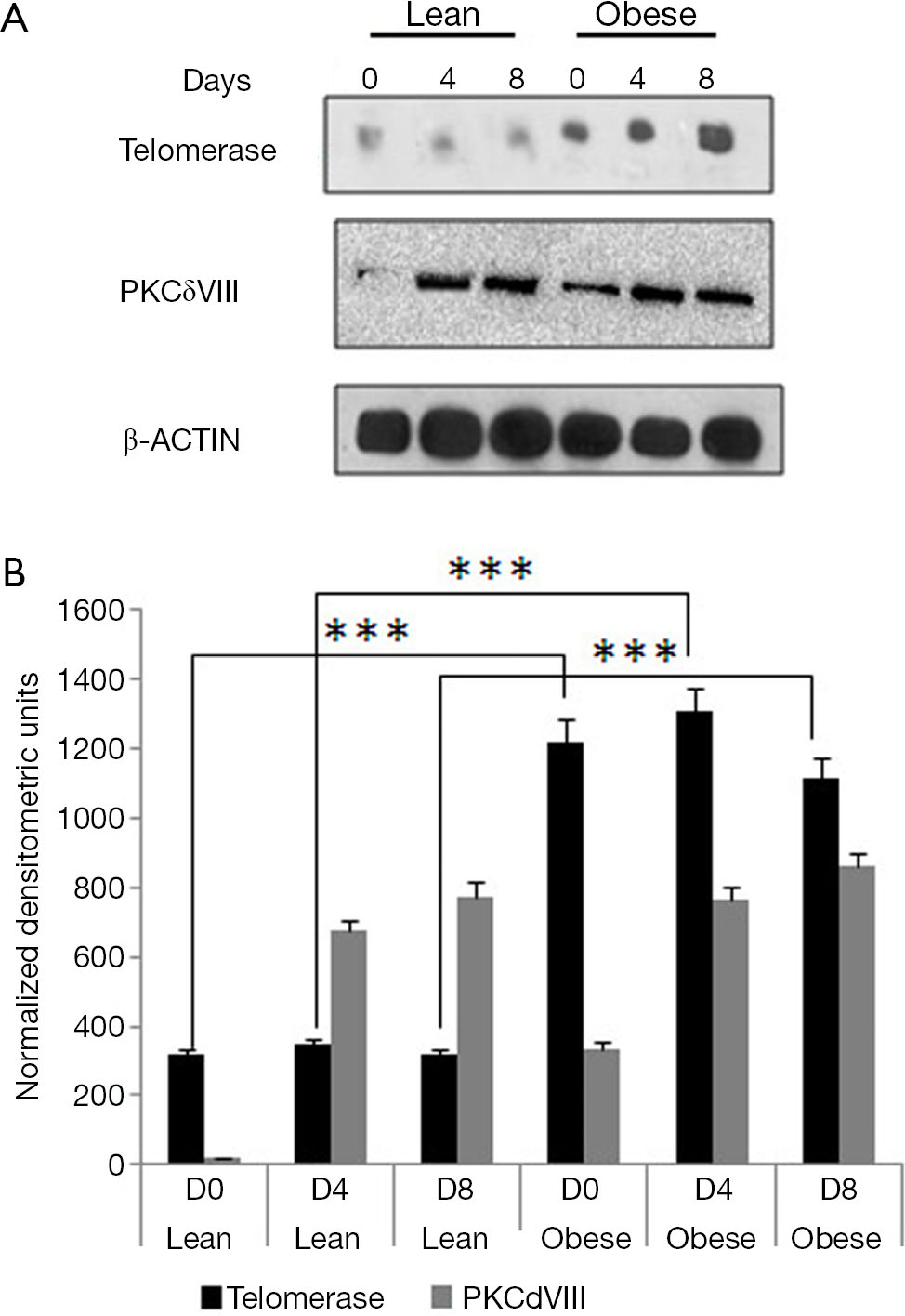 Figure 2 TRAPeze assay: estimation of processivity for telomerase length. Assay was performed with subcutaneous lean (L) or obese (O) adipose-derived stem cells (ADSC) using either 5 or 3 µg of starting cell extract. Samples were heat inactivated as indicated for controls. TSR8 was used as control template for positive control (Pos) and heat inactivated TSR8 was used as negative control (Neg). The 36 bp internal standard was detected in all samples. The bands indicate telomeric repeats. The assay was repeated four times with similar results.

hTERT is a rate limiting step in telomerase activation. Several alternatively spliced variants of hTERT are reported: full length α+/β+ is usually associated with active telomerase. We compared the expression of hTERT splice variants from differentiating lean and obese preadipocytes using RT-PCR with hTERT primers that simultaneously detect α+/β+, α+/β–, α–/β+ and α–/β–. Our data (Figure 3A) indicated that obese adipocytes had increased expression of α+/β+ splice variant while its expression was extremely low in lean adipocytes. Expression of other splice variants was barely detected in either lean or obese samples. 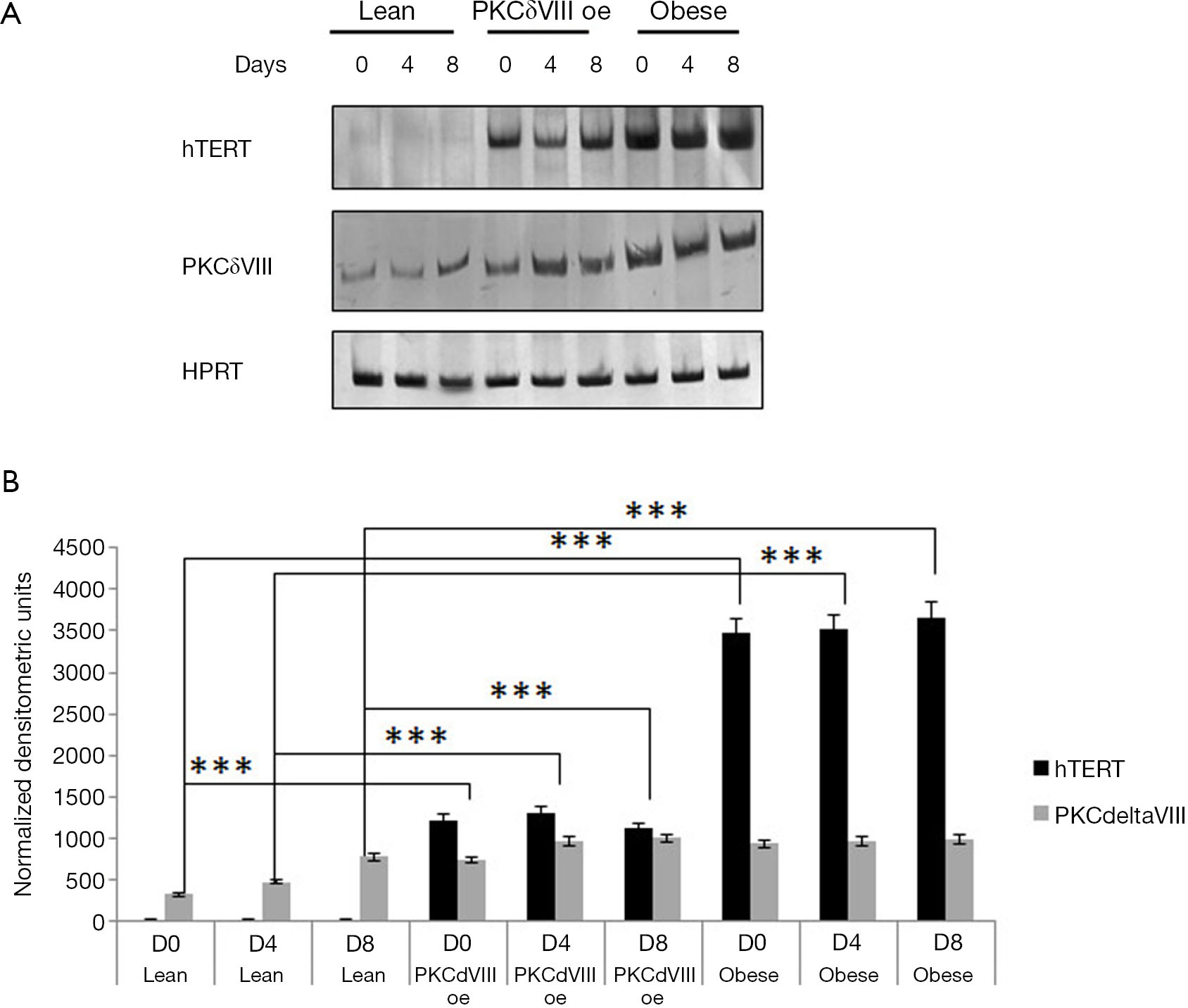 Effect of PKCδVIII on hTERT expression

Effect of PKCδVIII on telomerase expression 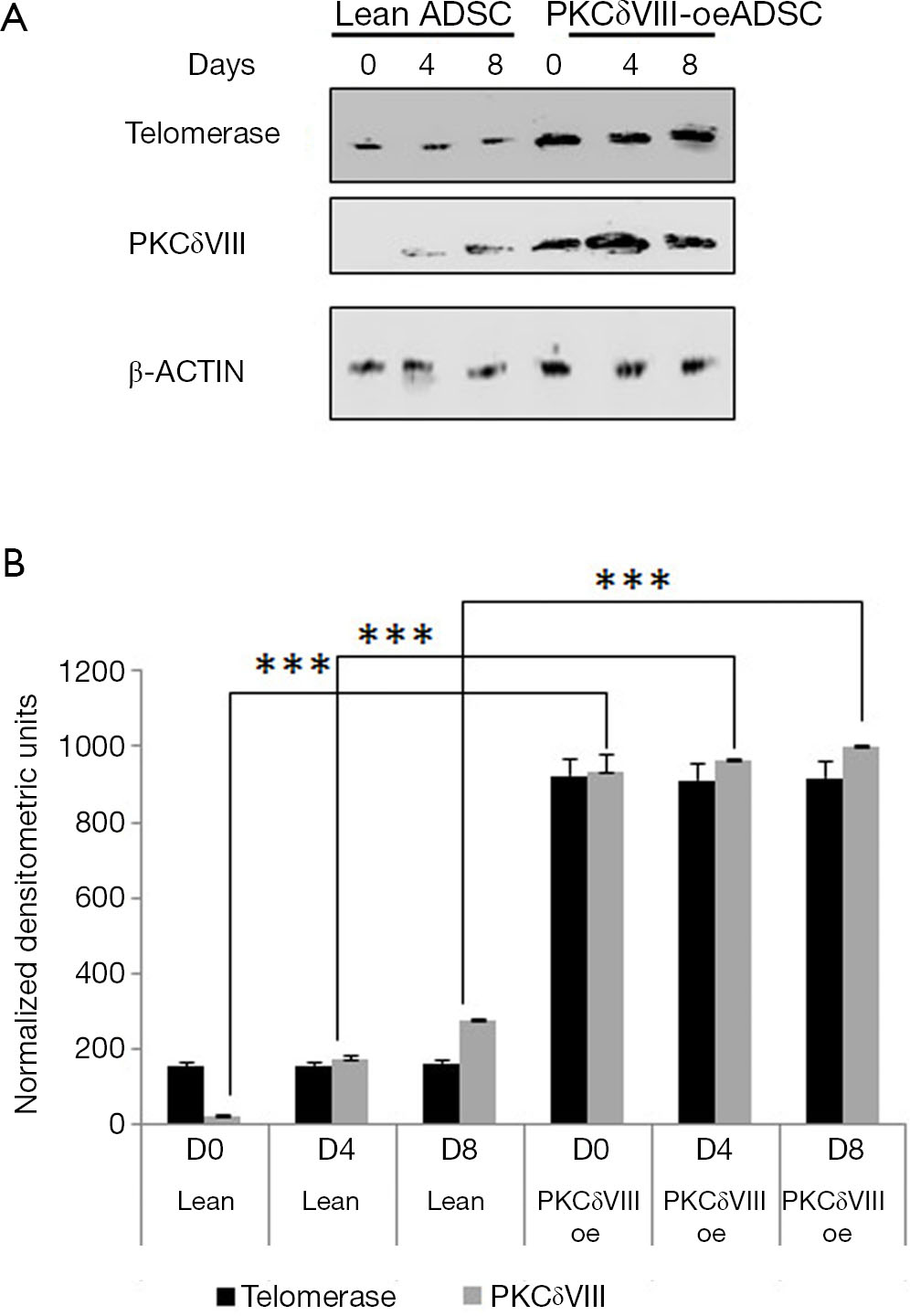 Diploid cells lose their ability to differentiate and normal cellular senescence sets in. This is often times related to shortening of the telomeric length. PKCδ has been shown to affect cellular senescence (7), however the splice variant specificity is not elucidated. Since, our data indicated that over-expression of PKCδVIII increased telomerase, we evaluated its effect on senescence. We simultaneously evaluated senescence in the obese ADSC. We determined the senescence-associated (SA) β-galactosidase activity by visualizing it as a blue stain in cells. PKCδVIII over-expressing lean ADSC showed lower senescence compared to control lean ADSC. Obese ADSC showed lower senescence compared to control lean ADSC as seen in Figure 5A-D. 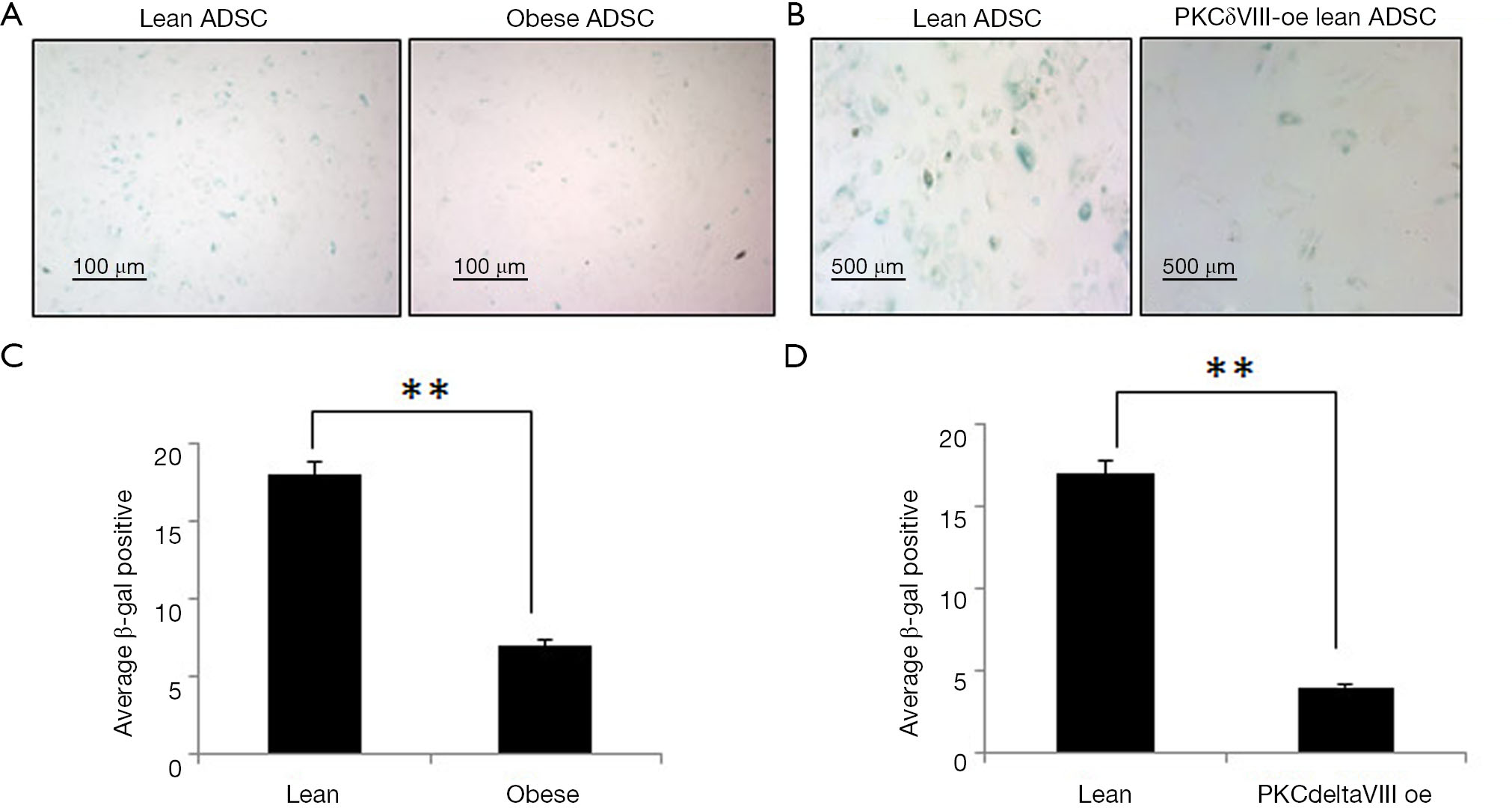 In white adipose tissue (WAT) about 10% of adipocytes are renewed yearly (8,9). Adipose stem cells residing in the stromal vascular region initiate adipogenesis by proliferation of preadipocytes and subsequent differentiation into mature adipocytes. This process can be followed in vitro by isolating primary human ADSC from adipose tissue. We have characterized the stem cell markers using real time qPCR and flow cytometry in ADSC from an obese patient as well as from dedifferentiated fat (DFAT) cells (1). We further demonstrated the multipotency of ADSC by differentiating them in vitro into adipocytes and osteoblasts.

Protein kinase C δ (PKCδ) is a serine/threonine kinase with roles in proliferation and apoptosis. We identified the human splice variant PKCδVIII and showed that it promoted survival in cells (6,16). During adipogenesis, expression of PKCδVIII increases as the preadipocytes are committed to differentiation to adipocytes. By day 4 (terminally differentiated) they exhibit lipid accumulation which is a hallmark of maturing adipocytes. Our results indicated that PKCδVIII reached peak expression by day 4 and its levels were maintained in mature adipocytes. Previously, we demonstrated that in obese preadipocytes, adipogenesis is dysregulated. Further, expression of PKCδVIII is high in obese ADSC even at day 0 before differentiation is initiated. PKCδVIII levels peak by day 2 and are maintained in mature adipocytes (2).

ADSC obese subjects express hTERT α+/β+ alternatively spliced variant; lean ADSC show very low expression and the other splice variants are not significantly different between lean and obese (unpublished observation, Patel lab). Inclusion of the α region and the β region on hTERT pre-mRNA during splicing generates the full-length α+/β+ splice variant. Additional splice variants that are reported show deletion of α or β or both α and β regions (17). In addition to this, exclusion of exon 2 is reported which produces a splice variant which results in a truncated protein (18). The roles of these splice variants are still being investigated but are thought to either act as dominant-negative inhibitor of telomerase activity or affect other extra-telomeric functions of TERT such as Wnt signaling or mitochondrial localization (19-21).

There are extensive studies performed on telomerase and hTERT in several cancers; however, this is the first study showing that full length hTERT splice variant expression is increased in obesity. Alternative splicing provides for regulation of gene expression as well as the ability to change in accordance to the changing environment and disease states. PKCδ is also alternatively spliced and here we show that the alternatively splice variant PKCδVIII increases expression of α+/β+ hTERT splice variant and telomerase protein expression in ADSC. Our results also indicate that PKCδVIII is not entirely responsible for the higher telomerase and hTERT expression seen in obese ADSC. This may be explained considering the additional factors affecting telomerase expression and activity as discussed above.

Obesity presents with additional complications of inflammation and cell death alongside hyperplasia and hypertrophy. Obese adipocytes secrete different levels of cytokines and adipokines. We show decreased senescence in obese ADSC; however mature adipocytes may show increased senescence due to stress and inflammation. Our results point to epigenetic modifications in obese ADSC which could influence the factors and hormones secreted by the obese adipocyte thereby changing its autocrine and paracrine functions.

We thank James Watson for help with establishing ADSC in culture.

Funding: This work was supported by the Department of Veterans Affairs Medical Research grant (NA Patel).

Disclaimer: The contents do not represent the views of the Department of Veterans Affairs or the United States Government.