Aplastic anemia (AA) is a disease characterized by bone marrow hematopoietic dysfunction and peripheral blood pancytopenia (1). The severity of AA is defined according the blood count parameters and bone marrow findings. Specially, severe aplastic anemia (SAA) patient had a marrow biopsy showing less than 25% of normal cellularity or, marrow showing less than 50% normal cellularity in with fewer than 30% of the cells are hematopoietic and 2/3 of the following: neutrophil count 9/L, platelet count 9/L, or reticulocyte count 9/L. Very severe aplastic anemia (VSAA) patient was further defined by neutrophils 9/L. Patient not meeting the criteria for SAA or VSAA was diagnosed with non-severe aplastic anemia (NSAA) (2). Laboratory and clinical results indicate that AA is a T cell immune-mediated autoimmune disease that involves destruction of hematopoietic progenitor/stem cells (3). This observation is validated by the powerful evidence that treatment with cyclosporine A, prednisolone, and antithymocyte globulin leads to hematological recovery in a majority of patients with AA. Mechanisms of T cell-mediated destruction of hematopoiesis include oligoclonal expanded populations of autologous T cells, which cause a significant decrease in the number of hematopoietic progenitor/stem cells (4), a Th1 polarization response conferring an immoderate production of inhibitory cytokines, and a Th17 immune response (4-6). Regulatory T-cells (Tregs) impairment also plays a critical role in the pathophysiology of AA (7). In that sense, T cells play a key role in the imbalance in immune homeostasis in AA. Moreover, aberrant T cell activation was shown to be involved in the misbalance in T cell immune homeostasis in autoimmune disease where alterations in T cell receptor (TCR) signaling play a crucial role.

TCR signaling and its regulatory factors

TCRs recognize antigens bound to MHC molecules on the surface of antigen-presenting cells (APCs). This event results in the transduction of TCR signals which lead to cell proliferation, differentiation, cytokine secretion, and other effector functions (8). Due to the central role of T cells in the immune system, alterations in TCR signaling can lead to diseases, such as immunodeficiency or autoimmunity.

Precise T cell activation is controlled by positive (costimulatory) or negative (coinhibitory) signaling molecules (14). After binding to CD80 or CD86 on APCs, the costimulator CD28 interacts with PKCθ to activate NF-κB and sustains antigen-induced T cell activation. The coinhibitory cytotoxic T-lymphocyte associated protein 4 (CTLA-4), which is expressed on activated T cells also binds to CD80 or CD86 and interrupts T cell activation (15,16). After TCR ligation by specific antigens, T cells are stimulated to proliferate and differentiate into the cytotoxic effectors Th1 and Th2 helper cells, regulatory T cells, Th17 cells, or follicular helper T cells, which are influenced by the cytokine milieu and strength and duration of the TCR signal (17,18).

The CD3 signaling molecules play a central role in the TCR signaling pathway. In most reports, a significant increase in the CD3γ, CD3δ, CD3ε, and CD3ζ expression levels was detected in peripheral blood samples from newly diagnosed AA patients, which may result in enhancing T cell activation (19,20). Interestingly, the CD3ζ expression level was higher in NSAA compared with SAA patients. However, in contrast with these reports, there was a study demonstrating decreased CD3ζ protein in AA patients. This result was derived from only five newly diagnosed patients with AA and 25 AA patients after immunosuppression therapy (21). The discrepancies might be due to different disease statuses.

CD28 and CTLA-4 and their related factors in AA

CTLA-4 and CD28 is a pair of homologous receptors expressed on T cells. These proteins share the same ligands while have opposing biological functions. CD28 is an important costimulatory molecule that provides a second signal that permits full T cell activation. Upon T cell activation, CTLA-4 is induced and outcompetes CD28 for ligands, thereby preventing excessive T cell activation (25,26).

Casitas B-lineage lymphoma proto-oncogene-b (Cbl-b), a RING finger E3 ubiquitin-protein ligase, is critical for establishing the threshold for T cell activation (27). Results have shown that CD28 promotes Cbl-b degradation, whereas CTLA-4 promotes Cbl-b re-expression (28). An increased CD28 and decreased CTLA-4 and Cbl-b mRNA expression level were also found in patients newly diagnosed with AA (20). These results suggest that aberrant T cell activation in AA not only associates with the initial signals, but it is also related to the secondary signals in the TCR signaling pathway. Downregulated Cbl-b expression in AA suggests that the threshold for T cell activation is different than that in healthy individuals.

Other TCR signaling molecules and their regulatory factors in AA

As the upstream signaling kinase, ZAP-70 performs a major role in T cell activation, while LAT plays an important role in the recruitment and assembly of multiple signaling effector proteins (29). An increased level of LAT, total phosphorylated LAT, and ZAP-70 were detected in SAA patients. The expression of LAT is positively correlated with the expression of perforin and granzyme B, which are associated with cytotoxic T cell functions. After immunosuppression therapy, the expression of ZAP-70 and LAT dramatically decrease. Inhibition of LAT expression in T cells results in a significant decrease in the expression of perforin and granzyme B and the production of IFN-γ in SAA patients (30). Therefore, increased LAT expression contributes to T cell hyperfunction in AA.

DAG is a critical second messenger that mediates TCR signaling. The abundance of DAG is reduced by DGKs. In T cells, the predominant DGK isoforms are DGKα and DGKζ (31). DGKζ terminates DAG-mediated downstream signals and negatively regulates T cell activation. This finding was confirmed by repressed DGKζ expression, which enhances T cell activation by elevating the miRNA34a level in AA patients (32).

Aberrantly expressed TCR signaling molecules, such as upregulated CD3γ, CD3δ, CD3ε, CD3ζ, CD28, ZAP-70, and LAT and downregulated CTLA-4 and Cbl-b may contribute to inappropriate T cell activation in AA patients (Figure 1). There is variation in TCR signaling molecules among AA individuals that may be associated with different disease statuses, genetic backgrounds, and regulatory mechanisms. Moreover, a global profile of molecules related to the TCR signaling pathway characterized at the genetic or epigenetic levels is needed to provide a precise illustration of T cell activation and strategies for targeted immunotherapy in AA. 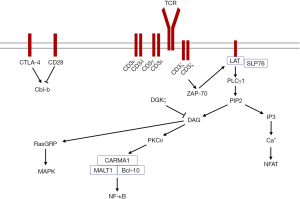 Funding: This study was sponsored by grants from the National Natural Science Foundation of China (81370605 and 81460026), the Natural Science Foundation of Guangdong province (S2012010008794), Science and Information Technology of Guangzhou funded basic research for application project (2014A020212209) and the Fundamental Research Funds for the Central Universities (21612425).