Double umbilical cord blood transplantation (dUCBT) was developed in order to increase the cell dose and to allow adult patients without a sufficiently sized single cord blood unit (CBU) to proceed to that type of transplantation (1). It appeared to be associated with less graft failure in adult patients, but with similar recovery kinetics of leucocytes and platelets as compared to single UCBT (1-3). Importantly, hematopoietic recovery after dUCBT generally originates from only a single cord blood unit, designated as the predominant (PD)-CBU (1-3). Single donor chimerism is readily documented within 3 months post-transplant in the majority of patients (1-5), but actually may occur as early as 7–14 days after transplantation (6-9). Graft predominance was earlier suggested to be T-cell mediated, as higher doses of graft CD3+ T-cells and also early recovery of alloreactive, IFN-gamma secreting CD8+ T-cells appeared associated with graft predominance (5,10,11). Following our earlier observations that blood CD4+ T-cell numbers rapidly increase after dUCBT (8) and early CD4+ T-cell chimerism predicts for graft predominance (6), we hypothesized that alloreactive HLA-class II-specific CD4+ T-cells from the ‘winning’ CBU may contribute to rejection of the ‘loser’ CBU. That hypothesis was confirmed in a recent study from our group, showing that HLA-class II allele-specific CD4+ T-cells were readily detectable after transplantation and were able to recognize both class II mismatched cord blood progenitor cells and primary leukemic cells, which was associated with T-cell effector function (12). This study heavily depended on the use of a unique set of laboratory tools, including HLA-class II allele transduced HELA-cells, by which very low numbers of alloreactive T-cells could be propagated (13) and subsequently be evaluated for effector function towards class II mismatched hematopoietic cells and primary leukemic cells. A library of stimulator cells expressing a single HLA-class II allele was generated by retroviral transduction of HLA-class II negative HeLa cells with different combinations of HLA-DRA1/B1-5, HLA-DQA1/B1 or HLA-DPA1/B1 molecules, as described (14). Propagated T-cells were co-cultured with HeLa cells transduced with a specific mismatched HLA-class II molecule derived from the non-engrafting (NE)-CBU, followed by assessment of T-cell activation antigens and effector markers. Here we present an individual patient example as well as a summary of results in the context of the most recent literature.

Results of an individual patient

Post dUCBT peripheral blood mononuclear cells (PBMC) were first propagated by HLA-class II allele-specific stimulation in co-culture with irradiated HeLa cells transduced with a single HLA-class II (mismatched, or 3rd party neither expressed by the PD-NE nor recipient) molecule (14–21 days), followed by analysis of the T-cell culture for alloreactivity. To analyze T-cell alloreactivity, the propagated T-cells were co-cultured for 2–20 h with HeLa cells transduced with the selected mismatched, matched or 3rd party HLA-class II alleles followed by FCM assessment of measures of specific immune reactivity in propagated T-cells, typically being upregulation of the activation marker CD137. Figure 1 shows detailed results of patient UPN 02 showing 14% CD137+/CD4+ T-cells reactive with the DRB1*01.01 mismatch versus 1.6% CD137+/CD4+ T-cells with specificity for the matched DRB1+03.01 allele. 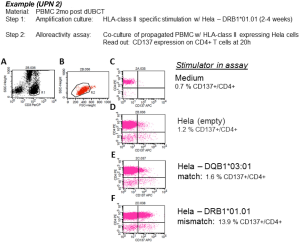 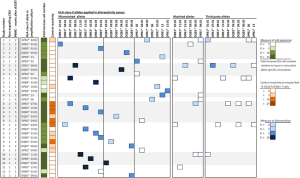 Double UCBT was developed to allow also adult patients, for whom no sufficiently sized single unit could be identified, to proceed to this type of alternative donor transplantation (1). While a lower risk of graft failure was observed after double UCBT, hematopoietic recovery most times resulted from only one unit, whereby recovery kinetics for the various hematopoietic lineages was not significantly different as compared to recovery after single unit UCBT (having engrafted effectively) (1-3). Unit predominance observed by different studies was long poorly understood and parameters predicting for predominance were questioned and addressed in a number of studies. Parameters that appeared to be associated with predominance included the number of CD3+ T-cells in the graft (pre-transplant) and the recovery of CD8+ T-cells after transplantation with specific activity towards the rejected unit (5,10,11). In addition, experimental studies supported a possible causative role of lymphocytes of the predominant unit (15-17). Meanwhile, no evidence could be obtained for a causative role of NK-cells and KIR-mismatching (18-20).

Interestingly, the non-dominant CBU total nucleated cell (TCN) dose may also play an important role. Purtill et al. (21) showed that the non-dominant-CBU TNC dose was significantly associated with neutrophil engraftment, which might be explained by effective presentation of mismatched HLA-antigens by myeloid precursor cells of the non-dominant CBU, which strongly express both class I and class II antigens. T-cell alloreactivity towards these precursor cells may result in unit predominance but also into enhanced graft versus leukemia (GVL) (22-24). Interestingly, in adult patients suffering from hematological malignancies, dUCBT may be associated with a lower incidence of relapse (25-29). A possible stronger graft versus leukemia (GvL) effect might be associated with a stronger T-cell mediated GVL reactivity, due to multiple major HLA-antigen mismatches (14,29). While alloreactivity towards non-inherited maternal antigens (NIMAs) (30) or inherited paternal antigens (IPAs) (31) also might contribute and also NK-cells and KIR-mismatching might also be involved, the impact of allele mismatching, especially class II mismatching may argue in favor of a T-cell mediated effect (14,20,32,33).

The alloreactive T-cells in our study also recognized leukemic cells in a subset of patients, when the mismatched HLA-class II alleles were shared between NE-CBU and the leukemic cells (12). Thus, a CD4+ T-cell mediated graft-versus-graft alloreactivity may involve and enhance GvL in the dUCBT setting and thereby provide an explanation for the low relapse rate associated with dUCBT. These results are in line with earlier results by Stevanovic et al. (34), showing experimentally that alloreactive CD4+ T-cells directed against mismatched HLA-class II molecules are capable of directly eliminating leukemic cells. In order to exploit this phenomenon in dUCBT, the two CBUs might be selected for reciprocal HLA-class II mismatches that match with the recipient. In this setting the generated graft-versus-graft HLA-class II alloreactivity may reduce relapse incidence and improve clinical outcome by specific targeting of HLA-class II molecules expressed by leukemic cells.

Taken together, results by Stevanovic et al. (34) and our results suggest that graft-versus-graft alloreactivity might potentially facilitate GvL after dUCBT. Despite documented graft-versus-graft reactions in dUCBT, also single unit UCBT has been associated with a low relapse rate and strong GVL-effect, which might be explained by a greater HLA-disparity between donor and recipient when compared with unrelated donor transplantation. Of note, there was no significant difference in relapse rate among children and young adolescents after single- and double-UCBT in two randomized controlled trials (35,36), while dUCBT was suggested to be associated with a higher incidence of graft versus host disease (35). Collectively, these and other (26) observations suggesting a strong GVL-effect after single and double UCBT indicate that single UCBT should be preferred when a cord blood unit with a sufficient dose of progenitor cells is available. Further development is, however, needed by approaches that may enhance engraftment and recover by for example stem cell expansion while preserving alloreactive potential towards the underlying malignancy.