Synthetic cannabinoids (SCBs) are chemicals that produce several marijuana-like effects in humans. In recent years, they have become increasingly abused as they are cheap, easily available on the internet, and are not detected by routinely employed urine toxicology screening tests (1,2). One in nine high school seniors admitted using SCBs in 2011, making it the 2nd most prevalent illicit drug after marijuana (3). SCBs are dissolved in a volatile solvent and mixed with an assortment of plant leaves, such as Indian Warrior, Lion’s Ear, Dog Rose and/or Marshmallow leaves, which are themselves purported to have psychotropic effects upon smoking (4). Uneven distribution of SCBs to the plant mixture can result in drug “hot spots”, making dosing unpredictable and difficult, increasing the risk of overdose (5). There are commercially available, quasi-legal, unregulated ‘‘herbal incense’’ under names such as K2, K3, Spice, Smoke and Dream, just to name a few (6).

While usually labeled “not for human consumption” distributors and consumers understand that these products are to be used like marijuana primarily to attain a subjectively pleasant cannabimimetic psychotropic effects. This label has kept these products from being subjected to the Federal Analogue Act of 1986. This transfers all responsibility for the user’s safety from the manufacturers and distributors to the consumer, who is often unaware of the product’s potential danger (7). The most infamous of which are JWH- 018, JWH-073, JWH-200, CP-47, 497 and cannabicyclohexanol (7). Reports of acute kidney injury (AKI) attributed to it are on the rise but the underlying pathophysiology is elusive (8). Previous reports of AKI have shown diffuse patchy tubular injury favoring an ischemia related injury (8). We are reporting the first case of a young adult who presented with AKI after the use of SCBs and found to have biopsy proven thrombotic microangiopathy (TMA) as the major pathological pattern of the organ injury.

A 20-year-old man with no prior medical history presented to the emergency department after 2 episodes of generalized tonic-clonic seizures as witnessed by his mother. He complained of nausea and vomiting prior to the seizure. On arrival, he was conscious, then suffered from another 3-minute seizure episode. Intravenous levetiracetam 1,000 mg was given as initial treatment. Patient had no past history of seizures. His initial blood pressure was 176/88 mmHg and heart rate was 104/minute. Physical examination was otherwise unremarkable. He underwent computed tomography of his head, which was negative for bleeding or any other pathology.

Admission labs were consistent with anemia and AKI, with hemoglobin of 8.3 mg/dL, hematocrit of 27.4 mg/dL, and elevated serum creatinine of 3.2 mg/dL. He developed thrombocytopenia (platelets trended down from 162,000/mm3 on admission, to 147,000/mm3 on day 1 and 124,000/mm3 on day 2. On day 4 his serum lactate dehydrogenase levels were elevated at 309 U/L increasing to 530 U/L on day 10. Schistocytes were noted on peripheral smear and serum haptoglobin level low, less than 8 mg/dL, consistent with intravascular hemolysis. Initial urinalysis showed a specific gravity of 1.018, 3+ protein, 5–10 red blood cells per high power field, and RBC casts on urine microscopy. Urine protein to creatinine ratio was 5.06 on spot testing. A routine drug screen was positive for tetrahydrocannabinol. Serological investigation was negative for antinuclear antibody (ANA), anti-neutrophil cytoplasmic antibody (ANCA), anti-glomerular basement membrane (GBM) antibody, hepatitis screens, and HIV antibody screen.

Renal ultrasound was unremarkable. Since the patient admitted to daily use of SCBs over the prior few weeks, a sample was sent to the University of California in San Francisco for toxicology analysis and showed the presence of CP 47, CP 497 and Hebrew University (HU) 320. Due to worsening renal function, a kidney biopsy was performed and revealed thrombotic macroangiopathic lesions affecting the glomeruli with acute tubular injury (Figure 1A-C). The ADAMTS-13 (a disintegrin and metalloproteinase with a thrombospondin type 1 motif, member 13) levels, which are less than 10% in TTP, were within the normal range (67% activity) which ruled out TTP. A clinical diagnosis of drug-induced thrombotic microangiopathy (DITMA) with the concern of an atypical hemolytic uremic syndrome (aHUS) was suspected. Shiga toxin producing Escherichia coli testing was not performed, as the patient did not have any diarrhea. The patient initially received plasmapheresis with no response and was eventually started on hemodialysis. The concern for aHUS possibly triggered by SCBs was raised and treatment with complement blockade was offered but the patient initially refused. 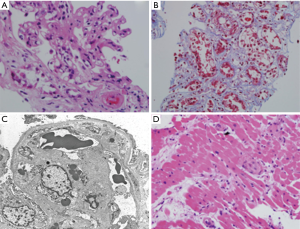 An endomyocardial biopsy was performed due to significant decline of the left ventricular ejection fraction to assess for possible need of simultaneous heart transplantation (Figure 1D). Pathology was consistent with TMA affecting small vessels. The patient eventually underwent renal transplantation with eculizumab added to his anti-rejection regimen. He did not consent to genetic testing and the post-transplant serum creatinine level at 6 months was 1.4 mg/dL and the platelets count returned to normal range, at 223,000/mm3.

DITMA is important to diagnose as it is a preventable cause of TMA, generally managed first by withdrawing the suspected drug. The diagnosis of DITMA is made clinically with findings of MAHA and TMA associated with concurrent drug exposure. However, management of a patient with suspected DITMA may be challenging as DITMA and other primary thrombotic microangiopathies including TTP and complement-mediated TMA, have a similar clinical presentation but require different management modalities. A detailed clinical history is the key to making the correct diagnosis.

Recently published systematic review included 78 drugs known to cause TMA (9). We propose adding SCBs to this list. Individual agents identified in the reported case include CP 47, CP 497, and HU 320. Using the “Criteria for Assessing Reports of Drug-Induced Thrombocytopenia and Levels of Evidence for a Causal Relation between the Drug and Thrombocytopenia” in our patient, a probable level of causality can be ascertained as described (10). These include that the suspected drug was taken before thrombocytopenia occurred and recovery from thrombocytopenia was complete and sustained after the drug was discontinued. Moreover, the suspected drug should be the only drug taken before the onset of thrombocytopenia, or other drugs were continued or reintroduced with a sustained normal platelet count. Additionally, to the extent possible with secondary documentation, all other potential causes of thrombocytopenia were reasonably excluded (10). This is further presented in Table 1.

The exact mechanism of drug induced TMA remains elusive but some reports suggest an idiosyncratic, acute immunologic reaction whereas others suggest a direct toxic effect, which may be either acute dose-related toxicity or chronic dose and duration-dependent toxicity (11). Some patients had severe kidney injury and were described as having HUS; others had minimal kidney injury. It is possible that patients with severe HUS presentation may have an underlying complement dysregulation.

Inherited and acquired complement alternative pathway dysregulation, is related to various renal diseases by defective complement control, leading to the deposition of activated products, known as C3 glomerulopathies. Current modalities of treatment available for complement regulation include blockade with the anti-C5 monoclonal antibody eculizumab or by plasma substitution with success seen in several cases (12).

The agents included in SCBs may provide the second hit by unmasking the abnormality resulting in endothelial damage. Our patient failed to respond with plasmapheresis which makes it more likely that TMA was caused either by the direct toxic effect of these substances or by unmasking an underlying complement dysregulation.

We are reporting for the first time SCB induced acute injury associated with biopsy proven TMA/vasculopathy in both kidney and heart. Arterioles and arteries of all sizes up to arcuate size were affected. In view of the marked vascular involvement including those of larger size, it was concluded that acute tubular injury was most likely secondary to severe vasculopathy. TMA may be more prevalent in SCBs but perhaps remain underreported due to the lack of renal biopsy in the majority of such cases.

Cannabinoid 1 and cannabinoid 2 receptors are present in almost all cell types in the kidney and play an important role in regulating normal renal physiology via the endocannabinoid system (15). Changes in these receptors are seen in pathological states like diabetic nephropathy, which causes the cannabinoid 2 receptor downregulation. Cannabinoid 1 receptor upregulation has been documented in IgA nephropathy, in acute interstitial fibrosis, and in mesangial fibrosis (16). One may postulate a cannabinoid receptor mediated injury to endothelial cells and/or podocytes, serves as an initial insult interfering with vascular endothelial growth factor receptor, leading to thrombosis and TMA.

The reported case represents the first biopsy-proven TMA secondary to SCB, not previously reported in English literature. We recommend adding SCB to the list of drugs associated with DITMAs. The implication that SCBs has deleterious effects, including DITMA necessitates further regulation on the manufacturing and selling of SCBs. Clinicians should be aware of these effects of SCBs as the drug has become more popular and these have not been reported with marijuana use. Further reporting and research of the SCBs and marijuana effects could better characterize SCBs association with renal injury.

We would like to acknowledge Westchester Medical Center which provides a wealth of opportunity for patient care and academic opportunities.

Informed Consent: Written informed consent was obtained from the patient for publication of this manuscript and any accompanying images.