Stem cells are key players in development, maintenance and regeneration of adult tissues. In the small intestine, stem cells reside at the bottom of the crypt, interspersed with Paneth cells, where they divide to give rise to progenitor or transiently amplifying (TA) cells (1). After few division rounds, TA cells differentiate and concomitantly ascend along the crypt-villus axis, to eventually complete the renewal of the intestinal epithelium in 4–5 days. The maintenance of tissue homeostasis relies on a variety of factors and signaling pathways operating in the intestinal crypt and necessary for the generation of the stem cell niche (2). The Wnt signaling is of particular interest as it is a well-conserved pathway controlling self-renewal and lineage commitment in metazoans. In vertebrates, 19 different Wnt proteins ligands are involved in the spatio-temporal activation of multiple signaling pathways (3). In particular, activation of the canonical Wnt pathway via Frizzled (Fzd) and its co-receptors LRP5/6 tethers to the plasma membrane the multiprotein destruction complex, consisting of adenomatous polyposis coli (APC), Axin, glycogen synthase kinase 3 (GSK-3), casein kinase 1 (CK1), protein phosphatase 2A (PP2A) and E3-ubiquitin ligase β-TrCP, which results in the cytoplasmic accumulation and nuclear translocation of β-catenin. In the nucleus, β-catenin regulates the transcription of a subset of genes in cooperation with members of the TCF/LEF family of transcription factors. While the integrity of this pathway is essential for the ISC self-renewal and for the homeostasis of intestinal epithelium, its deregulation is often observed in diseases such as cancer. Loss-of-function of Wnt negative regulators has been extensively investigated. For instance, mutations in the APC gene are found in colorectal or gastric cancer, truncating or missense mutations in the Axin genes are associated with colorectal and hepatocellular cancer, and missplicing of GSK3β transcript is prevalent in patients with leukemia (4-6). However, gain-of-function mutations, for instance in the β-catenin and TCF7L2 genes have also been observed in cancer, specifically in hepatocellular carcinoma and colorectal cancer (7,8).

The epigenetic control of the Wnt signaling pathway lately emerged as an important additional regulatory layer. Indeed, several reports already highlighted the epigenetic inactivation of Wnt pathway negative regulators, including DACH1, WIF1, SFRP and DKKs, in various human malignancies (9-12). Recently, Chiacchiera and colleagues demonstrated that the Polycomb repressive complex 1 (PRC1) is required for the integrity of the intestinal epithelium by investigating its function in adult intestinal stem cells (13). The polycomb group proteins are important epigenetic regulators involved in development and pluripotency (14). PRC1 complexes display a great plasticity in eukaryotes with at least six biochemically distinct groups (15). All these complexes operate in collaboration with the E3 ubiquitin ligases Ring1a or Ring1b, which catalyse the mono-ubiquitination of H2A (H2Aubq) on lysine 119 (H2AK119). To characterize the function of PRC1 in adult tissue, the authors employed a mouse model that couples a constitutive knockout (KO) of Ring1a with a conditional KO of Ring1b. While Ring1a KO is largely compensated by Ring1b expression, inactivation of both genes severely hindered intestinal homeostasis as well as H2A ubiquitination. Moreover, loss of PRC1 function in Lgr5-ISCs generates a gradual deterioration of the crypt architecture (13). This finding echoes numerous earlier reports supporting the notion that polycomb group proteins maintain stem cell renewal by repressing genes that control differentiation (16-21). Next, the authors investigated whether Ring1a/Ring1b double KO cells could properly differentiate, by monitoring the activity of alkaline phosphatase in the villi. Tissue staining revealed that double KO cells were unable to complete differentiation of specialized intestinal cells as compared to wild-type ISCs. Interestingly, this was associated with the downregulation of key transcription factors involved in this process (e.g., Ascl2, gata4/6 and cdx1/2). However, in accordance with the repressive function of PRC1, most of the differentially regulated genes in Ring1a/Ring1b double KO cells were upregulated. Further analysis of differentially expressed genes revealed that distruption of PRC1 in ISCs prevents proper intestinal lineage commitment rather than promoting a premature cellular differentiation (13). The notion that PRC1 serves as a gatekeeper to block inadequate lineage commitment was already introduced in other systems. For instance, knockdown of 2 different components of PRC1 complex (BMI1 and Ring1b) in myoblast impedes the formation of fully differentiated myotubes (22). Similarly, loss of PRC1 function through inactivation of KDM2B and CBX4 blocks the lineage commitment of hematopoietic stem cells and epidermal basal cells, respectively (23,24).

The finding that PRC1 has the ability to establish different repressive transcriptional programs raises questions about the mechanisms used by cells to specifically recruit the complexes to the chromatin. Genome-wide profiling studies demonstrated that PRC1 and PRC2 polycomb complexes share a subset of target sites (17,20). Characterization of PRC1 and PRC2 recruitment to these targets revealed that inactivation of PRC2 (with consequent loss of histone 3 lysine 27 trimethylation, H3K27me3), determines loss of PRC1 binding to target sites (25). This suggests that PRC1 is sequentially recruited to the DNA after the binding of PRC2 and the deposition of H3K27 methylation. However, this classical model does not explain the PRC2-independent tethering of PRC1 to other genomic loci. Recent reports demonstrated that PRC1 could be recruited to CpG islands via binding to the lysine demethylase 2B or KDM2B (26,27). In this view, contrary to the classical model, PRC1 recruitment by KDM2B allows the sequential binding of PRC2 and the silencing of gene expression. Alternatively, PCR1 can be recruited to the DNA through interaction with non-coding RNAs (ncRNAs) (28-31). PRC1 was found to interact with ncRNAs via its subunit SCML2A (31). Interestingly, interfering with this interaction by mutating the RNA binding region of SCML2 strongly reduced PRC1 recruitment to the chromatin, thus supporting the role of ncRNAs as potential chromatin anchoring points for protein complexes.

To further clarify how PRC1 supports ISC self-renewal, Chiacchiera and colleagues performed a gene ontology analysis on upregulated genes identified in Ring1a/Ring1b double KO cells. The authors found that the only significantly enriched functional ontology class was DNA-binding transcription factors. Interestingly, among these, the Zic family of zinc transcription factors was previously reported to interfere with the Wnt pathway (32). Using a combination of ectopic expression/inactivation of ZICs, and immunoprecipitation experiments in colorectal cancer cell lines or intestinal-crypt derived organoids, the authors showed that ZIC1 and ZIC2 can inhibit the Wnt signaling by physically interacting with the β-catenin/TCF complex (13). In accordance with this hypothesis, the genomic occupancy of TCF7L2 in Ring1a/Ring1b double KO cells is reduced. Thus, PRC1 activity is required to repress the expression of ZIC TFs, and therefore sustain Wnt signaling in ISCs.

In their report, Chiacchiera and coworkers proved the existence of a PRC1-dependent epigenetic control of the Wnt signaling pathway in ISCs. This newly discovered regulatory layer operates via the transcriptional repression of ZIC TFs, and prevents the formation of the transcriptionally inactive ZIC/β-catenin/TCF complex. Thus, PRC1 activity maintains the pool of ISCs and is essential for normal intestinal tissue homeostasis. Interestingly, this epigenetic control could potentially contribute to the dysregulation of Wnt/β-catenin signaling pathway often observed in human diseases such as cancer (33-35). Indeed, loss of PRC1 activity in tumor cells derived from ISCs expressing a mutant form of β-catenin (CTNNTB1ex3/ex3) fully prevents tumor formation (15). These findings highlight the potential of blocking PRC1 activity as a new therapeutic approach to target cancer stem cells, which rely on Wnt signaling for growth and survival. While efforts to block PRC1 activity using a small inhibitory molecule have already been reported (36), another possibility might be the use of peptides able to mimic ZIC function and therefore displace β-catenin/TCF complex from the chromatin. However, deleterious effects on healthy stem cells and tissues homeostasis are certainly a potential drawback to consider before therapeutics aimed at blocking PRC1 or the Wnt signaling can be developed. Alternatively, the emerging involvement of lncRNAs as guides or chromatin docking intermediates for protein complexes might offer unique opportunities to interfere with specific PRC1 complexes and, therefore, minimize unwanted effects (Figure 1) (37,38). 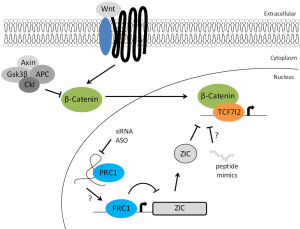 Figure 1 Schematic representation of new potential approaches to interfere with the Wnt pathway. In intestinal stem cells Wnt ligands determine the accumulation of β-catenin in the cytoplasm and in the nucleus, by counteracting the destruction complex (i.e., APC, Axin, Gsk3β and CkI). In the nucleus, PRC1 sustain β-catenin activity by repressing the expression of ZIC transcription factors. Inactivation of putative lncRNAs guiding or anchoring PRC1 at ZIC promoter, as well as the use of peptides mimicking ZIC protein function, might represent promising strategies against Wnt-dependent tumors.