Is there a role for allogeneic hematopoietic stem cell transplantation for refractory follicular lymphoma?

Follicular lymphoma (FL) is the most common indolent lymphoma. Although the prognosis for FL is favorable, approximately 20% of patients relapse or progress within 24 months of initial chemoimmunotherapy. Early relapse is a poor prognostic indicator with a 5-year overall survival (OS) of 50%. First relapse is usually treated with salvage chemoimmunotherapy followed by autologous stem cell transplantation (autoSCT) for chemo-responsive disease. Patients who have chemo-resistant disease or are unable to tolerate autoSCT, have a dismal prognosis.

Allogeneic SCT (alloSCT) is not routinely recommended for FL patients due to the high treatment related mortality (TRM) with myeloablative conditioning regimen (MAC). The development of reduced intensity regimen (RIC) and non-myeloablative regimen (NMA) has markedly reduced TRM in alloSCT. However, the role of alloSCT vs. autoSCT in the treatment of relapsed/refractory FL (R/R FL) remains unclear. Published in Clinical Cancer Research in August 2021, the MD Anderson group retrospectively analyzed the outcomes of R/R FL patients who underwent either alloSCT or autoSCT and concluded that patients who received alloSCT had superior outcomes to those who received autoSCT (1).

Khouri et al. group evaluated 194 patients with R/R FL who received NMA alloSCT (n=98) vs. autoSCT (n=96) at the MD Anderson Cancer Center between January, 2000 and December, 2017. The median follow-up was 108 months for alloSCT and 102 months for autoSCT. The OS and progression-free survival (PFS) were significantly better in patients who received alloSCT compared to autoSCT. The 8-year relapse rate was significantly lower in the alloSCT group and non-relapse mortality (NRM) between the two groups was similar. The OS for the alloSCT group was 62%, which is similar to the 61% OS reported by the large CIBMTR/EBMT study examining alloSCT in 1,567 patients with R/R FL (2). However, a similar study by the CIBMTR comparing alloSCT to autoSCT in early relapse FL reported similar OS in matched related donor (MRD) alloSCT (73%) and autoSCT (70%) and inferior OS in matched unrelated donor (MUD) alloSCT (49%). It is worth mentioning that the alloSCT group included more chemo refractory patients than the autoSCT group (40% vs. 23%) (3).

It is impossible to compare the results of the referenced three trials (1-3) due to the inherent heterogeneity in methodology (single center vs. registry studies), patient, disease and transplant characteristics. In Khouri et al., the alloSCT patients were rightly highly selected with a median age of 53 years and only 24% of patients aged above 60. Additionally, most of the patients were enrolled on clinical trials, only 11% had a comorbidity index ≥3 and 16% had chemo refractory disease. Older age, poor performance status and chemo refractory disease have previously been shown to be predictors of worse outcome in R/R FL (2).

The Thomas Jefferson University program has pioneered a novel alloSCT two-step approach (4). We previously reported the outcomes of the two-step alloSCT in lymphoma patients. A subgroup analysis of the indolent lymphoma patients yielded a 3-year OS of 77% (Figure 1). The majority of patients received RIC/NMA haploidentical SCT (5). 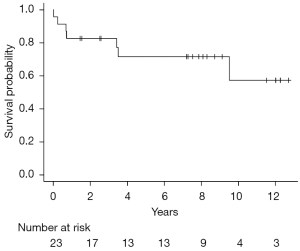 In May, 2021, The Food and Drug Administration (FDA) approved axicabtagene ciloleucel, the first Chimeric antigen receptor T cell (CAR-T) therapy for R/R FL after two lines of therapy (3 L R/R FL) (6). In May, 2022, The FDA approved the second CAR-T therapy for 3L R/R FL, tisagenlecleucel. CAR-T therapy achieved unprecedented complete remission (CR) rates of 77% and TRM under 1%. However, the median follow-up time for both products is under 18 months and the real-world data is lacking (7).

Given the early excitement with CAR-T therapy in 3L R/R FL, is alloSCT a thing of the past?

Our opinion is to the contrary! The promising CAR-T data is attracting more patients to transplant and cellular therapy centers to receive this treatment. These patients were not referred for transplant consideration by their primary oncologists due to preconceived belief that alloSCT has an acceptable high TRM. Despite the outstanding early CR rates after CAR-T therapy, the CR curve did not plateau after a median follow-up of 24 months. Now that these patients are coming into the spotlight of transplant physicians, alloSCT will be considered in more patients.

Provenance and Peer Review: This article was commissioned by the editorial office, Stem Cell Investigation. The article did not undergo external peer review.

Conflicts of Interest: All authors have completed the ICMJE uniform disclosure form (available at https://sci.amegroups.com/article/view/10.21037/sci-2022-041/coif). The authors have no conflicts of interest to declare.