Immunotherapy has shown great promise in the treatment of a variety of cancers (1-3). Prior to the incorporation of new therapeutic agents in the clinical setting, these drugs must be assessed for their therapeutic potential in predictive preclinical models and therefore, mouse xenografts have been developed to screen new cancer drug (4). Patient-derived xenografts (PDXs) are currently being used to facilitate the identification and development of new and novel therapeutic targets (5). We and others have shown that the biology of PDXs is similar to the corresponding patient tumors, at both the histologic and molecular levels after multiple passages (6,7). However, PDX models cannot be used to study immune-oncology as these models lack an immune system. To generate mouse models with human immune system, humanized PDX models have been developed in which CD34+ cells from umbilical cord blood are transplanted in immuno-deficient mice and have been shown to have a functional human immune system that display T-cell dependent responses (8). However, due to human leukocyte antigen (HLA) mismatches between the reconstituted donor hematopoietic/immunologic cells and the PDX tumor cells, we found an approximately 30% tumor rejection rate in humanized PDXs secondary to the allograft vs. tumor response which complicates result interpretation (data not shown).

To overcome this alloimmune limitation, we herein report the first development of a novel, humanized PDX model using autologous CD34+ cells from bone marrow aspirate obtained from a patient with metastatic clear cell renal cell carcinoma (mRCC) from whom a PDX had been developed. This patient had previous refractory disease to all available systemic therapies, but obtained a complete and durable radiographic response and remission with nivolumab. We further demonstrated the feasibility of using this model to evaluate and recapitulate the durable response and efficacy of programmed cell death protein 1 (PD-1) immune checkpoint inhibitor and results obtained from our model were consistent with patient’s long-term clinical response to PD-1 pathway inhibition. We present the following case in accordance with the CARE reporting checklist (available at https://sci.amegroups.com/article/view/10.21037/sci-2022-029/rc).

A 68-year-old Caucasian man initially presented in January 2014 to the Duke Cancer Center with gross hematuria and was found to have a 13 cm right renal solid, enhancing mass with metastasis to the liver (Figure 1A). Additionally, there was evidence of tumor thrombus in the renal vein and inferior vena cava, a 5.7 cm left adrenal mass, pulmonary nodules, and enlarged mediastinal lymph nodes concerning for metastatic disease. He was enrolled on the Argos ADAPT clinical trial (9) of cytoreductive nephrectomy followed by randomization to sunitinib +/− AGS-003 (a personalized tumor derived RNA vaccine) and underwent a cytoreductive right nephrectomy, left adrenalectomy and partial liver resection. Pathology from this surgery was diagnostic of clear cell renal cell carcinoma (RCC), grade 3 with renal vein invasion (Figure 1B,1C). The nephrectomy specimen was subsequently used to develop a PDX as described previously (7). 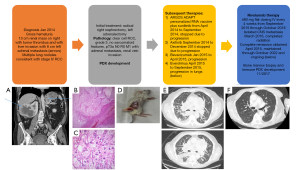 All procedures performed in this study were in accordance with the ethical standards of the institutional and/or national research committee(s) and with the Helsinki Declaration (as revised in 2013). The Duke Institutional Review Board (IRB) (No. Pro00082398) approved the protocol. Written informed consent was obtained from the patient for publication of this case report and accompanying images. A copy of the written consent is available for review by the editorial office of this journal.

Development of a PDX model

PDXs of the patient was generated as described previously (7) at Duke University under an Institutional Animal Care and Use Committee (IACUC) approved protocol. The resected nephrectomy specimen described above was minced and injected subcutaneously into 8–10 weeks old NSG mice. Following injection, the site of injection was monitored until a tumor was observed (approximately 8 weeks). Tumors were then measured 2–3 times per week using a vernier caliper and volumes were calculated using the formula (V = L × 2W × 0.52, L = longest diameter, W = shortest diameter) until tumors reached ~1,000 mm3. Tumors were then harvested and serially re-implanted until a stable RCC PDX was established (Figure 1D).

He was initiated on nivolumab 480 mg IV every 4 weeks and after 2 doses, he continued to decline with increased oxygen requirements and dyspnea but was continued on therapy. Three months after initiation of nivolumab he was diagnosed with new central nervous system (CNS) metastasis which was surgically resected; therapy was continued. A computed tomography (CT) four months after initiation showed marked interval reduction in pulmonary and liver metastases and his oxygen requirements resolved and he symptomatically improved with a restoration of his functional status. A magnetic resonance imaging (MRI) showed no residual CNS disease except for a small lesion in the frontal lobe which received stereotactic body radiation therapy (SBRT) while nivolumab was ongoing. He received 60 cycles total of nivolumab and achieved a complete clinical and radiographic remission (Figure 1F). Today seven years after initiation of nivolumab, and 4 years after stopping systemic therapy, he continues to be in complete remission and enjoying a prolonged treatment free interval free of disease or symptoms from his cancer. While still dealing with progressive Parkinson’s disease, he no longer requires home oxygen, his imaging is normal, and he is doing well. He did develop nivolumab induced primary adrenal insufficiency after 12 months requiring steroid replacement therapy which he continues presently.

Given his prolonged response to nivolumab, we attempted to generate a humanized PDX model as a preclinical model to immunotherapy. After the confirmed establishment of the RCC PDX described above, patient was consented under a Duke approved IRB protocol (No. Pro00082398) and a bone marrow aspirate was performed under local anesthesia from the right posterior iliac crest. This marrow was obtained off nivolumab and all systemic therapy and after his complete remission had developed. Approximately 30 mL bone marrow aspirates were obtained. Human CD34+ hematopoietic stem/progenitor cells (HSPCs) were then isolated using a two-step procedure according to the manufacturer’s instruction (STEMCELL Technologies, Vancouver, Canada). HSPCs were first pre-enriched using the RosetteSepTM pre-enrichment cocktail with antibodies recognizing T cell, B cell, myeloid cell and platelet to eliminate lineage positive cells (enriched HSPCs). CD34+ HSPCs were then selected using EasySepTM positive selection cocktail from the enriched HSPCs with an antibody recognizing CD34.

At 11 weeks post-transplant, the matched patient PDX was injected subcutaneously into the humanized mice derived from patient’s own HSPCs. Following injection, the site of injection was monitored until a tumor was observed (approximately 3 weeks). Tumors were then measured 2–3 times per week using a vernier caliper and volumes were calculated using the formula [(V = L × 2W × 0.52) (L = longest diameter, W = shortest diameter)] until tumors reached 250 mm3. The mice were then injected with nivolumab [200 µg intraperitoneal (IP) weekly]. As a control, non-humanized RCC PDX were also injected with nivolumab. Figure 3 shows that the humanized RCC PDX responded to nivolumab therapy whereas the non-humanized RCC PDX did not respond suggesting that our humanized immune model can potentially be used to study immuno-oncology.

Our case represents successful therapy of nivolumab, a programmed death 1 (PD-1) checkpoint inhibitor, in mRCC. Nivolumab was approved for use in patients with advanced renal cell carcinoma who have received previous antiangiogenic therapy based on the CheckMate 025 trial (10). Nivolumab treatment was associated with longer overall survival and fewer grade 3 or 4 adverse events compared to everolimus, and transformed second line therapy in this setting at the time of its approval (10). This seminal finding ushered in the use of PD-1 inhibitors in combination trials in the first line clear cell RCC setting as well, either with CTLA4 blockade or vascular endothelial growth factor tyrosine kinase inhibitor (VEGF TKI) therapy, which remains the current first line standard of care (11-14). More importantly, here we report the first case development of a matched RCC patient-derived immune PDX constructed using human bone marrow CD34+ cells and PDX derived from a same patient to study immune-oncology. We showed that the HPSCs obtained from a single bone marrow aspirate were able to reconstitute an immune system in the mice that allowed nivolumab to inhibit the tumor growth of PDX and recapitulated the durable remission observed in the patient with nivolumab. We observed the reconstitution of human T cells, B cells and NK cells and unlike the humanized mouse model using cord blood, our model system eliminates the tumor rejection from mis-matched HLA. Thus, our autologous humanized RCC PDX model provides an effective tool to study immunotherapy in a preclinical setting. Our study has significant ramifications in developing and testing novel immunotherapeutic agents for clinical application.

In our model system, we did not observe graft vs. host disease and this is likely due to the fact that we transplanted pure CD34+ HSPCs with minimal contamination of T cells. Therefore, during the reconstitution of humanized immune system in the mice, the developing T and B cell repertoire become tolerant to the host tissues.

It is noted that the human cell engraftment was low, which was likely due to the low number of transplanted HSPCs that was obtained from a single bone marrow aspirate. The patient was heavily pre-treated and had extensive metastatic disease, which could also affect the engraftment of his hematopoietic stem cells. Although it appears that such a low number of engraftment was sufficient to elicit an immune response in the presence of nivolumab, it would be interesting to see if higher number of engraftment could have enhanced effects. granulocyte colony stimulating factor (G-CSF) stem cell mobilization and apheresis likely lead to larger number of HSPC collection. Additionally, several knock-in NSG mice that express human cytokines such as thrombopoietic, interleukin-3 (IL-3), granulocyte-macrophage colony stimulating factor (GM-CSF) have been developed to support development and function of several human immune cells such as monocytes, macrophages and NK cells (15,16). These mouse models could lead to more comprehensive immune system that mimics human in vivo immune responses to tumors and tumor antigens.

To the best of our knowledge, this study is the first report of successful development of a novel, autologous humanized PDX model for the evaluation of nivolumab immunotherapy in mRCC. Our results provide a foundation for further developing this model for preclinical testing of immunotherapeutic agents.

The authors acknowledge the support of the Duke Cancer Institute Center for Prostate and Urologic Cancer research team in providing support for patient enrollment, as well as the DCI Precision Pathology and Biorepository Shared Resource.

Reporting Checklist: The authors have completed the CARE reporting checklist. Available at https://sci.amegroups.com/article/view/10.21037/sci-2022-029/rc

Ethical Statement: The authors are accountable for all aspects of the work in ensuring that questions related to the accuracy or integrity of any part of the work are appropriately investigated and resolved. All procedures performed in this study were in accordance with the ethical standards of the institutional and/or national research committee(s) and with the Helsinki Declaration (as revised in 2013). The Duke Institutional Review Board (IRB) (No. Pro00082398) approved the protocol. Written informed consent was obtained from the patient for publication of this case report and accompanying images. A copy of the written consent is available for review by the editorial office of this journal.