In recent years, significant advances have been made in understanding the biology of different tumor CSCs and their corresponding markers, as well as how they interact with the tumor microenvironment. As increasing evidence show that long-term tumor eradication requires eliminating not just the proliferative cells but also the tumor-initiating subpopulations (1,2), greater focus has been placed on developing therapeutic strategies that target CSCs, with potential for future clinical implementation. An important aspect of specifically targeting these tumor-initiating cells rely on the use of cell surface markers. Studies on liver CSCs have uncovered various cell surface antigens such as EpCAM, CD90, CD47, CD13, CD24, and CD133 that identify subpopulations of tumor-initiating cells in HCC (3-8). However, not all cell surface markers are functionally involved in regulating CSC phenotypes in HCC, and specific small molecule inhibitors against them are scarce. In a recent study by Leung et al. (9), the authors identified a novel CSC target for HCC, Eph receptor B2 (EPHB2), that not only acts as a membrane-bound CSC marker but also plays regulatory roles in promoting stemness properties in liver tumor cells. EPHB2 expression was found to increase progressively from normal liver to cirrhotic liver and to HCC in human and mouse models (9).

EPHB2 belongs to a large family of Eph receptor tyrosine kinases, which associate with membrane-bound ephrin ligands through cell-cell contact, leading to bidirectional intracellular signaling and activation of subsequent downstream signaling cascades (10). Eph receptors are involved in various cellular functions and processes, including cellular adhesion, cell migration, vascular development, cell proliferation and survival (10). The complexity of Eph receptor signaling also extends to its involvement in cancer. In fact, the role of EPHB2 in cancer is controversial, as it has been demonstrated to play both tumor-promoting and tumor-suppressive functions depending on the cellular context. In cancers such as glioblastoma, breast cancer, cervical cancer, and cutaneous squamous cell carcinoma, EPHB2 is overexpressed and promotes tumor progression and invasiveness (11-14). In contrast, EPHB2 exerts inhibitory effects on tumor cell migration and invasion, along with its downregulated expression, in cancers of the bladder and colon (15,16).

In the context of CSCs, few studies have investigated EPHB2’s role in regulating cancer stemness. EPHB2 was found to be highly expressed in colorectal cancer cells with intestinal stem cell-like phenotypes, and its expression gradually decreased as the cells became differentiated (17,18). In cervical cancer, EPHB2 was involved in orchestrating an epithelial-mesenchymal transition (EMT) program which contributed to tumorsphere formation and tumorigenic capabilities (19). To date, the study by Leung et al. (9) is the first to provide evidence demonstrating the tumor-promoting function of EPHB2 in maintaining CSC traits of self-renewal, tumorigenicity and drug resistance in HCC.

Using a series of experiments comparing sorted populations of high EPHB2-expressing (EPHB2High) and low EPHB2-expressing (EPHB2Low) tumor cells, the authors observed that EPHB2High cells were enriched for CSC markers CD90 and CD47, spherogenesis ability, and resistance to sorafenib and doxorubicin (9). When inoculated into mice, EPHB2High cells also exhibited greater in vivo tumorigenic potential in terms of higher tumor incidence as compared to EPHB2Low cells. The functional relationship between EPHB2 and these CSC traits was further corroborated using knockdown and overexpression assays. Knockdown of EPHB2 in HCC cell lines decreased sphere-forming ability and CSC marker expression, as well as increased sensitivity towards sorafenib and doxorubicin treatment. Conversely, the opposite effects were observed in EPHB2-overexpressed cells. Collectively, these findings highlight EPHB2 as a functional marker that is involved in the regulation of liver CSCs in HCC.

To understand how EPHB2 maintains CSC traits in HCC, Leung and colleagues (9) performed RNA sequencing and immunoprecipitation studies to elucidate downstream effectors of EPHB2 signaling. RNA-sequencing analysis on EPHB2-silenced tumor cells revealed that most downregulated genes belonged to the Wnt/β-catenin pathway, and further downstream experiments confirmed that β-catenin transactivation activity was suppressed in these cells and became elevated when EPHB2 was overexpressed. Mechanistically, EPHB2 was shown to bind and phosphorylate SRC, leading to the activation of AKT/GSK3β/β-catenin signaling axis. Along with data from a TCGA cohort analysis, which showed enrichment of Wnt/β-catenin pathway in HCC tumors with increased EPHB2 expression, these results led the authors to conclude that Wnt/β-catenin is a major downstream effector of EPHB2-mediated CSC functions.

Previous studies in colorectal cancer have shown that EPHB2 is a Wnt target gene, although the exact mechanisms are unclear (17,18). Notably, Leung and colleagues identified a putative TCF1 binding site in the promoter region of EPHB2, indicating β-catenin/TCF1 as the direct upstream activator of EPHB2 transcription. Knockdown of EPHB2 decreased TCF1 binding and EPHB2 promoter activation, further validating a TCF1/EPHB2/β-catenin positive feedback loop (Figure 1) that drives CSC properties in HCC. In contrast, EPHB2 employs different mechanisms in cervical cancer, whereby it promotes stem cell-like phenotypes through activation of EMT via R-Ras signaling (19). These results further illustrate the context-dependent mechanisms of EPHB2 in cancer and CSCs. 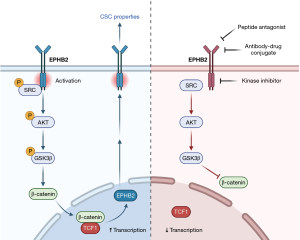 A key finding in the study by Leung et al. (9) is the demonstration that EPHB2 is associated with mediating drug resistance in HCC and can be targeted to attenuate tumor resistance to conventional therapies such as sorafenib. EPHB2 was initially identified to be a target of interest based on results from RNA-sequencing analysis of several sorafenib-resistant patient-derived tumor xenografts that were enriched with liver CSCs. The data revealed EPHB2 to be the most significantly and commonly upregulated kinase among the resistant tumor xenografts, and this elevated expression was also observed in sorafenib-resistant HCC cell lines. Importantly, silencing EPHB2 in NRAS/AKT-induced HCC mouse models showed greater efficacy in suppressing tumor growth when administered in combination with sorafenib, indicating that inhibition of EPHB2 could sensitize tumors to sorafenib treatment.

Despite this study being the first to establish the functional roles of EPHB2 in stemness phenotypes and drug resistance in HCC, several unanswered questions remain to be addressed. For example, it would be interesting to investigate the detailed mechanisms underlying how EPHB2 contributes to drug resistance in liver CSCs, especially if EPHB2 signaling is linked to drug transport or drug metabolism functions. Additionally, it is important to determine whether the CSC-promoting EPHB2 signaling involved in promoting cancer stemness is dependent or independent of ephrin ligand binding, which may influence the types of strategy used to target EPHB2. These include synthetic peptide antagonists to disrupt ephrin ligand binding and receptor activation (20,21), anti-EPHB2 antibodies that are conjugated with cytotoxic drugs to specifically target EPHB2-expressing tumor cells, which has been shown to impede tumor growth (22), and small molecule inhibitors that are selective against EPHB2 kinase function (Figure 1). While there are currently no commercially available selective kinase inhibitors against EPHB2, several preclinical studies using different cancer cell lines have identified novel compounds that are effective against EPHB2 (23-25), although further drug development has not been reported. Besides, it would also be useful to determine the initial upstream activator or cause of EPHB2 overexpression in HCC. Since Leung et al. reported a stepwise increase in EPHB2 expression from cases of liver cirrhosis to HCC, and studies have shown that EPHB2 upregulation can promote liver fibrogenesis in mice (26,27), EPHB2 overexpression in HCC could be a result of disease progression from EPHB2-induced hepatic fibrosis to full-blown cancer.

Overall, Leung et al. established a functional role for EPHB2 in enhancing CSC properties in HCC through a EPHB2/β-catenin/TCF1 positive feedback loop. The authors also demonstrated that targeting EPHB2 represents a viable strategy to alleviate tumor drug resistance, which has important implications for the treatment of drug-resistant cancers, as well as reinforcing the concept of inhibiting both bulk tumor and CSC populations through combination therapy to achieve more sustained tumor suppression and eradication. Thus, the dual role of EPHB2 as a cell surface marker and regulator of cancer stemness underscores the importance for future development of specific EPHB2 inhibitors or targeted therapies for potential clinical applications.

Cartoons for Figure 1 were created with BioRender.com

Provenance and Peer Review: This article was commissioned by the editorial office, Stem Cell Investigation. The article did not undergo external peer review.

Conflicts of Interest: All authors have completed the ICMJE uniform disclosure form (available at https://sci.amegroups.com/article/view/10.21037/sci-2022-031/coif). The authors have no conflicts of interest to declare.