Hepatocellular carcinoma (HCC) is the most common type of primary liver cancer. As with many other types of tumors, the concept of cancer stem cells (CSC) has been an attractive area of investigation to understand the pathogenesis of HCC. CSC comprise of a population of cells with stem/progenitor cell features and including the capacity to differentiate, self-renew, and form new tumors. Their presence contributes to tumor heterogeneity as well as high tumor recurrence rates (1).

Long non-coding RNAs (lncRNAs) are increasingly being implicated as key regulators of gene expression that contribute to the pathogenesis of HCC (2). In recent studies, chromatin remodeling complexes such as SWI/SNF subunits have been shown to contribute to lncRNA-mediated transcriptional silencing and implicated in mammalian stemness (3,4). A recent study by Wang et al. provides detailed information regarding a lncRNA that is over-expressed in liver cancers and in CSCs (5). LncTCF7 was shown to be important for self-renewal of liver CSCs, and can regulate TCF7 expression in cis through direct recruitment of SWI/SNF complex to the TCF7 promoter. LncTCF7 was shown to directly bind to BRG1, BAF170, and SNF5, three core subunits of SWI/SNF complex with high affinity in the nuclei of liver CSCs and without involvement in post-translational regulation of SWI/SNF complex. Systematic analyses identified a contribution of BAF170 to lncTCF7 co-localization in the nuclei as well as to the expression of stem pluripotent factors. The mechanistic role was further emphasized by studies that showed an effect of BAF170 knockdown in significantly reducing oncosphere formation in HCC cell lines, tumor-initiating capacity and xenograft tumor growth as well as reducing expression of TCF7, Nanog, and Wnt targets such as Sox2, CCND1, and 2. Interestingly, lncTCF7 up-regulated TCF7 expression with activation of Wnt signaling cascade that could contribute to self-renewal and differentiation of liver CSCs. These data indicate that lncTCF7 facilitates tumorigenicity in liver cancers through effects on the self-renewal ability of CSCs. TCF7 has been reported to contribute to T lymphocyte development and hematopoietic cell self-renewal. The current study now establishes an additional role of TCF7 in the self-renewal of liver CSCs and tumor propagation.

Several lines of evidence associate Wnt signaling with the complex etiology of HCC (6). Activation of the canonical Wnt/β-catenin pathway involves binding of Wnt protein to cell surface receptor Frizzled (FZDR) and LRP5/6 co-receptors. Over one-third of HCC patients present with enhanced expression of the signaling protein Wnt or FZDR, or reduced expression of FZDR inhibitors, making the Wnt pathway a potentially important therapeutic target in HCC (7). Although the role of Wnt in initiation of HCC is not clear; it is a determinant of an aggressive tumor phenotype as a result of effects on cancer cell proliferation, migration, and invasion. The demonstration of a mechanistic link between lncTCF7/TCF7 and Wnt signaling pathway supports an alternative opportunity for therapeutic targeting Wnt signaling through strategies that target lncRNA dependent pathways (Figure 1). However, even though targeting CSCs are attractive, studies are necessary to verify the presence of CSCs at all stages and in all liver cancers, as well as to evaluate if clonal evolution may determine the nature and frequency of CSCs. The ability to identify CSC populations expressed in all liver cancers and defined by a common set of markers is also unclear. Nevertheless, in other studies, induction of lncTCF7 by IL-6/STAT-3 has been associated with aggressive HCC progression through epithelial-mesenchymal transition (EMT) (8) further highlighting this lncRNA as a potential target for therapeutic intervention. 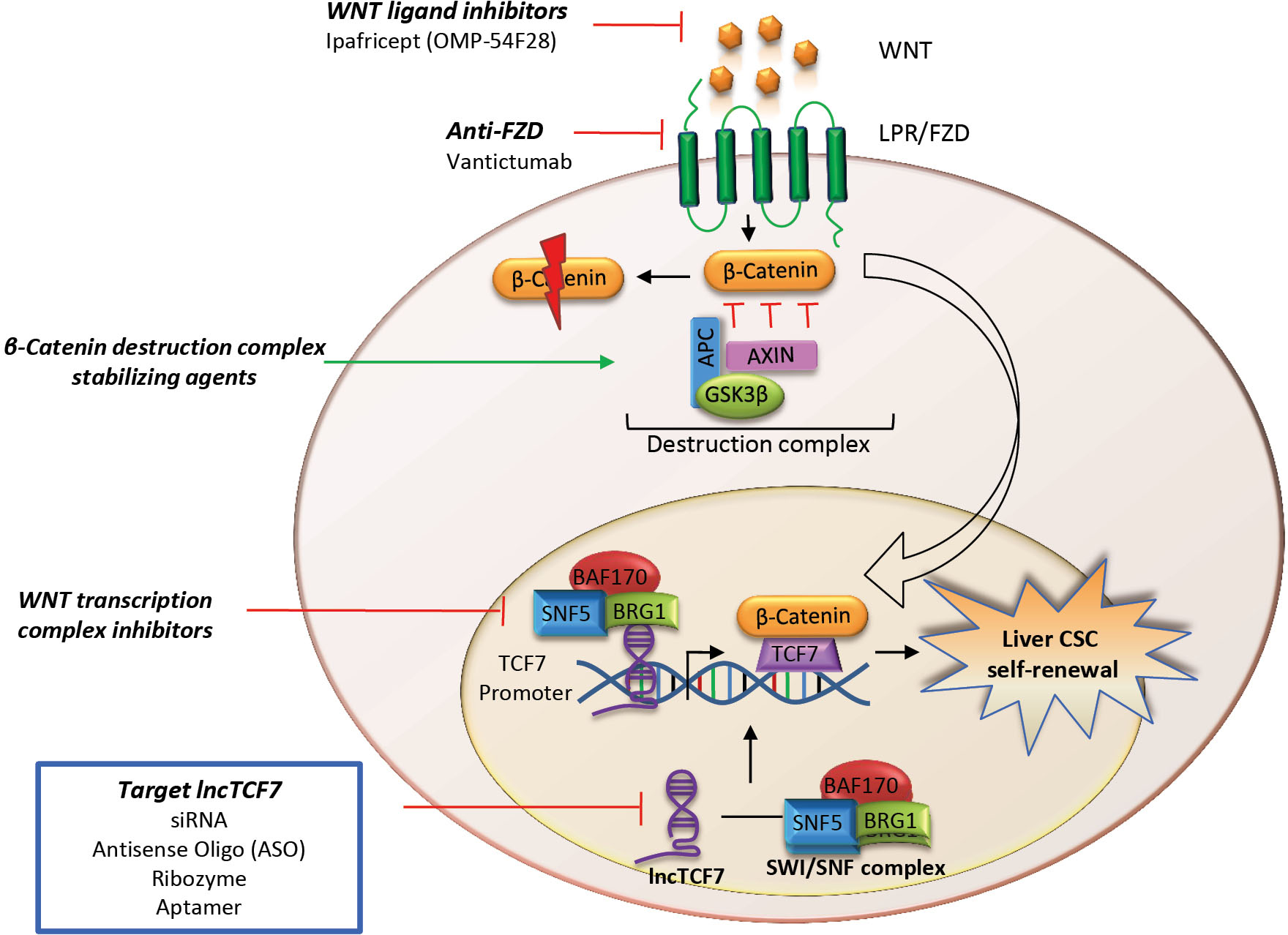 While we have focused on a single lncRNA, lncTCF7 as an example to highlight an important mechanistic role, the functional contribution of other lncRNA, of which there are large numbers, to diseases such as cancer remain to be elucidated. Indeed, emerging data highlights the diverse roles of several different lncRNAs in the initiation and progression of HCC and other cancers (2,9,10). For example, the lncRNA H19 was shown to be significantly enriched in CSC-like CD90+ liver cancer cells displaying an aggressive and metastatic phenotype, suggesting this lncRNA as another putative therapeutic target for liver CSCs (11). LncRNA-hPVT1 can promote cell proliferation by modulating cell cycle factors, and was noted to be responsible for acquisition of stem cell-like properties in HCC cells via stabilization of NOP2 protein. Furthermore, lncRNA-hPVT1 was found to have an inverse correlation with clinical prognosis in HCC patients (12). HOTAIR, a commonly upregulated lncRNA in HCC was also recently found to promote human liver CSC growth by restricting the association of CREB, P300, RNA pol II to the SETD2 promoter region, thus inhibiting SETD2 expression and phosphorylation (13). Until recently the potential role of lncRNAs in re-programming CSC fate through transcriptome modulation has been under-appreciated. However, as these studies indicate, targeting such lncRNA-dependent pathways offers new and exciting possibilities for therapeutic approaches for HCC.

Funding: Supported by Grant UH3TR000884 from the National Institutes of Health.