Platelet-rich plasma (PRP) is the plasma fraction containing many growth factors, prepared from whole blood samples. PRP has been used for the treatment of many diseases including general wounds (1), diabetic foot ulcers (DFU) (2), Crohn’s disease (3), psoriasis (4), degenerative musculoskeletal diseases (5), and in cosmetic applications (6). In-vitro studies have demonstrated the efficacy of PRP in enhancing the proliferation of numerous cell types including endothelial cells (7), fibroblasts (8), keratinocytes (8), and mesenchymal stem cells (9). Particularly in mesenchymal stem cells culture applications PRP has been widely used as a replacement for fetal bovine serum or fetal calf serum in the culture media. Due to risks of animal to human transmission of disease or immunogenetic concerns when using animal serum in clinical cell culture applications use of non-animal origin material (10), such as PRP, is preferred.

Diabetes prevalence in Indonesia has been on the rise since 1983. DFU is one of the most commonly reported complications of diabetes. A previous study has reported that 7.3–24% of diabetic patients had DFU. Because the prevalence of undiagnosed diabetes is higher than what is reported the actual prevalence of DFU is expected to be under reported (11).

Patients who develop DFU experience decreased quality of life through increased medically associated costs of consultation, hospitalization, and surgery for treatment. DFU management should focus on providing early diagnosis and wound treatment in order to mitigate amputation risks. Current standards in DFU management are wound debridement, diagnosis and treatment of infection, revascularization and ulcer off-loading (11). However, there were still about 41% of DFU patients studied at the Tertiary Care Hospital in Semarang, Indonesia, the required lower extremity amputation. These data indicate that there is a need for developing new strategies of DFU management.

PRP has been used in several clinical settings for treating diabetic ulcer. However, there are multiple PRP preparation protocols that affect the quality of the PRP itself. Several studies have investigated the plasma or serum composition of diabetic and non-diabetic patients (12,13). However, the preparation technique used in these studies were different from the protocol we have developed. In this study, the quality of PRP from diabetic patients produced by our protocol was evaluated and reported based on total platelet counts, vascular endothelial growth factor (VEGF) and protein levels, and were compared to PRP from non-diabetic patients.

Thirteen diabetic patients and ten non-diabetic male and female patients aged from 25 to 75 years old registered at the Klinik Hayandra, with no hematological disease were enrolled in this study. Diabetic donors had disease duration of less than 5 years and were taking medication to control blood glucose levels. Non-diabetic donors had blood HbA1c levels less than 6.5%. The study was conducted in accordance with protocols reviewed and approved by Health Research Ethics Committee, University of Indonesia and Cipto Mangunkusumo Hospital with issued letter of approval No. 628/UN2.F1/ETIK/2016.

PRP was prepared using a standard protocol. Briefly, blood was collected into four sodium citrate tubes. Tubes were centrifuged at 1,000 rpm for 5 minutes to separate plasma and red blood cells. Whole plasma from each tube was removed and collected into a single 15 mL conical tube per patient. Samples were then centrifuged at 3,000 rpm for 5 minutes resulting in concentrating platelets at the bottom of the tube. The upper platelet poor plasma (PPP) layer was discarded and the remaining 5 mL of PRP was collected and samples were stored at −86 °C.

Demographic of patients that participated in this study are presented in Table 1. Most donor ages ranged between 50–75 years old. The mean blood HbA1c level of the diabetic group was statistically significantly higher than in non-diabetic group (5.58%±4.67%, 7.06%±1.30%, P=0.001). 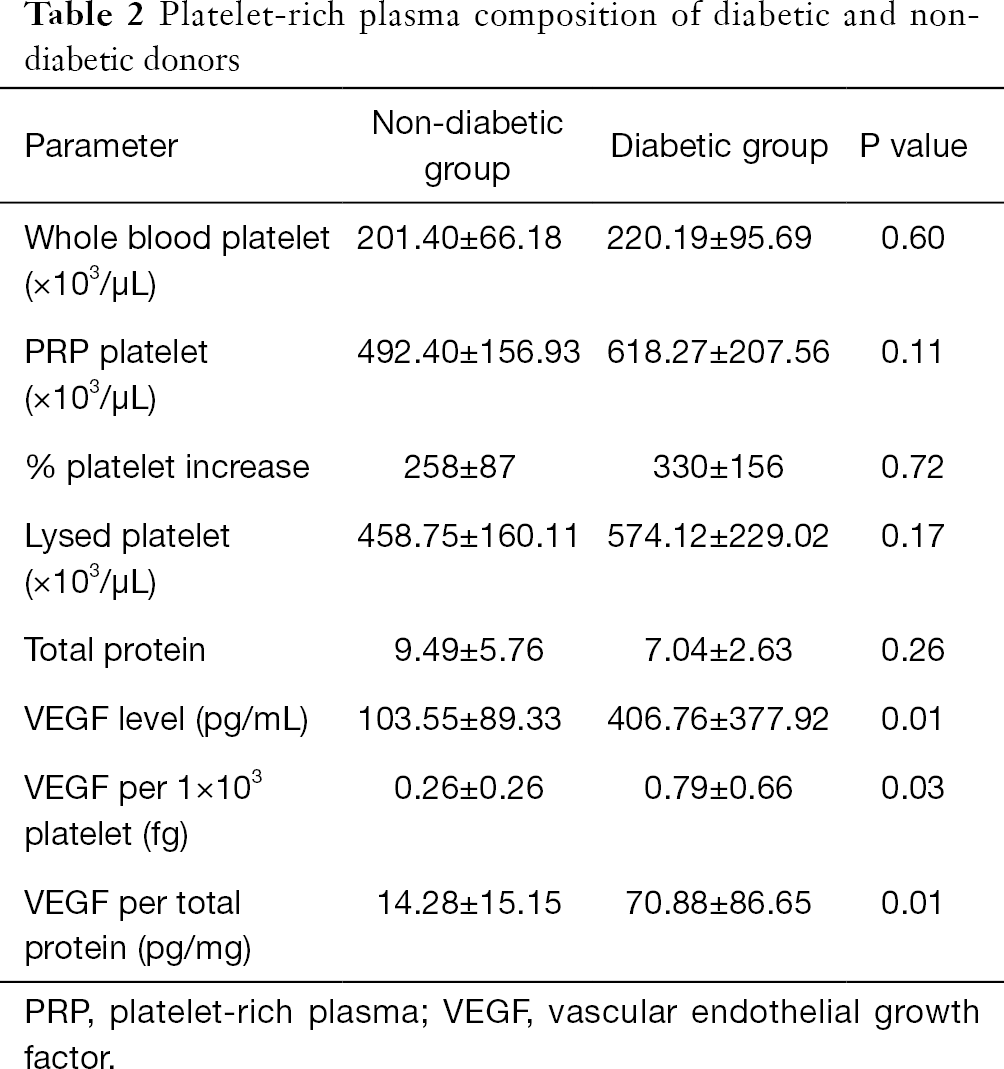 Foot deformities in conjunction with impaired sensation and infections are the primary cause of foot ulcer formation in diabetic patients. Wound healing processes in diabetic patients are disrupted due to chronic ischemic and inadequate tissue perfusion (14). PRP is well known for its angiogenic potential (15,16), thus it may be beneficial for treatment of DFU. Autologous PRP preparation requires collection of fresh whole blood using vacutainer tubes containing sodium citrate, acid citrate dextrose, citrate phosphate dextrose adenine, or ethylenediaminetetraacetic acid (EDTA), to prevent platelet activation during the preparation process (17,18). To collect concentrated platelets either single- or double-centrifugation requiring centrifugation at slower speeds (generally below 300 ×g) is used to separate plasma and red blood cell fractions, followed by centrifugation at higher speeds above 300 ×g (19). Centrifugation can be done for 5–20 minutes at 8–20 °C or at room temperature (19). The final volume of PRP can be adjusted to 3–30% of initial whole blood volume collected. Overall, PRP preparation is considered simple and can be done in most standard laboratories. However, the composition of PRP needs to be evaluated to ensure it is clinically efficacious.

PRP is composed of a higher concentration of platelets when compared to plasma or whole blood. In this study, platelets in PRP were 250% more concentrated than whole blood, regardless of donor status. One micro-liter of diabetic or non-diabetic derived PRP contained 0.5×106 and 0.4×106 platelets on average, respectively. For bone and soft tissue regeneration, the optimum platelet concentration in PRP therapy is set at 1×106 platelets per micro-liter. However, these general criteria have not been standardized.

PRP has a high concentration of growth factors per milliliter. Transforming growth factor-beta (TGF-β), fibroblast growth factor-2 (FGF-2), platelet-derived growth factors (PDGF-AB), insulin-like growth factor-1 (IGF-1), VEGF, epidermal growth factor (EGF), and hepatocyte growth factor (HGF) are all stored in platelet α-granules and released upon platelet activation (20). Platelets can be activated through chemical agents, such as thrombin or calcium chloride solution, or mechanically activated using physical friction or freeze-thawing techniques (20). Freeze-thawing was applied in this study to store PRP prior to analysis. Storing PRP at –80 °C followed by thawing resulted in the lysis of more than 90% of platelets in samples, with diabetic PRP fractions containing VEGF at 406.76±377.92 pg/mL, almost four times higher than VEGF in non-diabetic PRP fractions (103.55±89.33 pg/mL). Interestingly, the increased VEGF concentrations in diabetic PRP was not directly linked to the significant increased platelet content neither in blood or PRP. These results suggested that platelets from diabetic patients contained higher VEGF than non-diabetic platelets, supporting previously reported results.

Diabetes-related vascular complication is closely related to the increased aggregation of platelet (21). Platelets in diabetic blood were easier to form an aggregate under the same centrifugation process applied to non-diabetic blood that was seen in this study by higher platelet count in diabetic PRP compared to non-diabetic PRP, yet the blood platelet count of both groups was almost similar. Aggregated platelet releases cytokines and growth factors that activates endothelium (21). Once endothelium is activated, it recruits circulating immune cells and more platelets to adhere result in plaque formation. The rupture of any plaque can damage endothelium causing thrombus formation and vascular occlusion. Vascular occlusion triggers the distal tissue becoming ischemic and hypoxic. Hypoxia condition is a trigger for angiogenesis process by increasing HIF-1α and VEGF production to restore blood flow towards the ischemic tissue (22). Thus, this higher VEGF level in plasma may be reflected as a compensating mechanism for ischemia in diabetic patients (13). An excess of circulating VEGF can be endocytosed by platelets and megakaryocytes causes the higher VEGF content in diabetic platelet (23).

Another technique used to increase platelet or VEGF concentration in PRP is increasing input whole blood volume and reducing PRP final volumes to concentrate samples. Although reports have shown that there was no significant increase in human endothelial cell proliferation and migration produced by plasma stimulation at concentrations of less than 1×106 platelets per micro-liter (26). Therefore, increasing input whole blood volume higher than 24 mL in order to extract more platelets may not be beneficial. Additionally, in clinical practice all of the PRP extracted will be used for treating the ulcers so concentration through reduction of PRP final volume may not be beneficial.

While changing the input whole blood volumes or final PRP volumes may not provide clinical benefit, modifying techniques to activate platelets is a promising method to increase the release of growth factors from platelets. Freezing PRP samples at −86 °C followed by thawing can dramatically lyse the platelets. Growth factor release from platelets decreases stability increasing the potential loss of efficacy (27). Freezing PRP at −20 °C can also slowly release the growth factors from lysed platelets, but in our experience, the produced PRP will not be suitable for intravenous infusions as it increases the risk of thrombus formation. Clotting can be done ex-vivo by adding calcium chloride or thrombin into PRP. Combining thrombin and calcium chloride can increase VEGF level in PRP (20). However, an effective treatment is not only reliant on the high dose given. To create an effective treatment, the practician should consider the dose, the safety, the technique of administrations and the treatment regime combination. We believe that giving patients PRP both locally and systemically may increase the regenerative effect of PRP. Thus, we further customized our PRP preparation protocol by freezing samples at –86 °C to store the PRP prior to analysis or for use in mesenchymal stem cell culture. For clinical application, platelet activation was done chemically to result in a safe PRP product for intravenous administration, while maintaining the growth factors content for regenerative function.

Disturbed angiogenesis in diabetic patients can lead to development of DFU. PRP is safe and feasible in clinical practice for diabetes or non-diabetes treatment. Further studies with regards to the composition of PRP based on its pro- and anti-angiogenic factors should be done to develop the most effective PRP treatment for DFU. We have developed a protocol for PRP sample preparation and have found that diabetic PRP is rich in VEGF making it a potential candidate as treatment for DFU and tissue regeneration. However, thrombus formation that is frequent in vascular diabetic patients should be anticipated if intravenous administration route is applied, e.g. by performing ex vivo fibrin clot formation using activation agent such as calcium chloride. Phase I/II clinical trial should be done to investigate the efficacy of PRP prepared by our protocol in this study for the treatment of DFU.

PRP from diabetic donors had higher VEGF content making autologous PRP application a promising treatment for DFU. However, this should be investigated another appropriate clinical trial.

Ethical Statement: The authors are accountable for all aspects of the work in ensuring that questions related to the accuracy or integrity of any part of the work are appropriately investigated and resolved. The study was conducted in accordance with protocols reviewed and approved by Health Research Ethics Committee, University of Indonesia and Cipto Mangunkusumo Hospital with issued letter of approval No. 628/UN2.F1/ETIK/2016.