It is well known that umbilical cord blood (CB) cells have been used as one of standard source of hematopoietic stem cells (HSC) for allogeneic HSC transplantation (HSCT), and also offered an attractive, allogeneic T cell and natural killer (NK) cell source for immunotherapy such as chimeric antigen receptor (CAR)-T cells therapy, and increased their potential clinical applications for different disease such as ischemic stroke and anti-inflammation, etc. (1-4). T cell immunity of CB is relative different from peripheral blood (PB), which was characterized by different T cell repertoire, naive T cell number, T cell activation etc. (5-6). The characteristics of negative co-stimulator signal transduction pathway in CB T cells remains unclear. Recent reports showed that T cell inhibitory receptor (immunosuppressive receptor) such as programmed death-1 (PD-1), cytotoxic T lymphocyte antigen-4 (CTLA-4), T cell immunoglobulin mucin-3 (Tim-3), B and T lymphocyte attenuator (BTLA) play important roles in immune homeostasis (7). Overexpression of these factors involved in tumor immunosuppression and is associated with poor prognosis in cancer as well as hematological malignancy patients, while downregulation of these factors may be related to an autoimmune disorder. For example, upregulating PD-1 was found in T cells in PB from patients with hematological malignancies, while downregulating PD-1 was detected in patients with immune thrombocytopenic purpura (ITP) (7,8-10). It is well known low immunogenicity in CB T cells, while CB T cells showed higher potency of activation and proliferation after cytokine and antigen stimulation (11). Whether this feature is associated with T cell inhibitory receptor expression, in this study, we analyzed the expression levels of PD-1, CTLA-4, Tim-3, lymphocyte activation gene-3 (LAG-3) and BTLA genes in CB compared with PB.

Umbilical CB samples were collected from 15 full-term healthy babies at the delivery. PB from 22 healthy individual (12 males and 10 females; median age: 40 years; range, 21–71 years) were served as control. All of the experiments were conducted with the understanding and the consent of each participant, and ethical approval was obtained from the Ethics Committee of First Affiliated Hospital, School of Medicine, Jinan University.

Mononuclear cells from CB and PB were isolated, According to the manufacturer’s protocol, RNA was isolated, and then cDNA synthesis was performed, The expression levels of PD-1, CTLA-4, Tim-3, LAG-3, BTLA and the β2-microglobulin (β2-MG) reference gene (the sequences of primers were listed in Table 1) were detected by SYBR Green I quantitative real-time reverse transcription-polymerase chain reaction (qRT-PCR) as previously described (12). 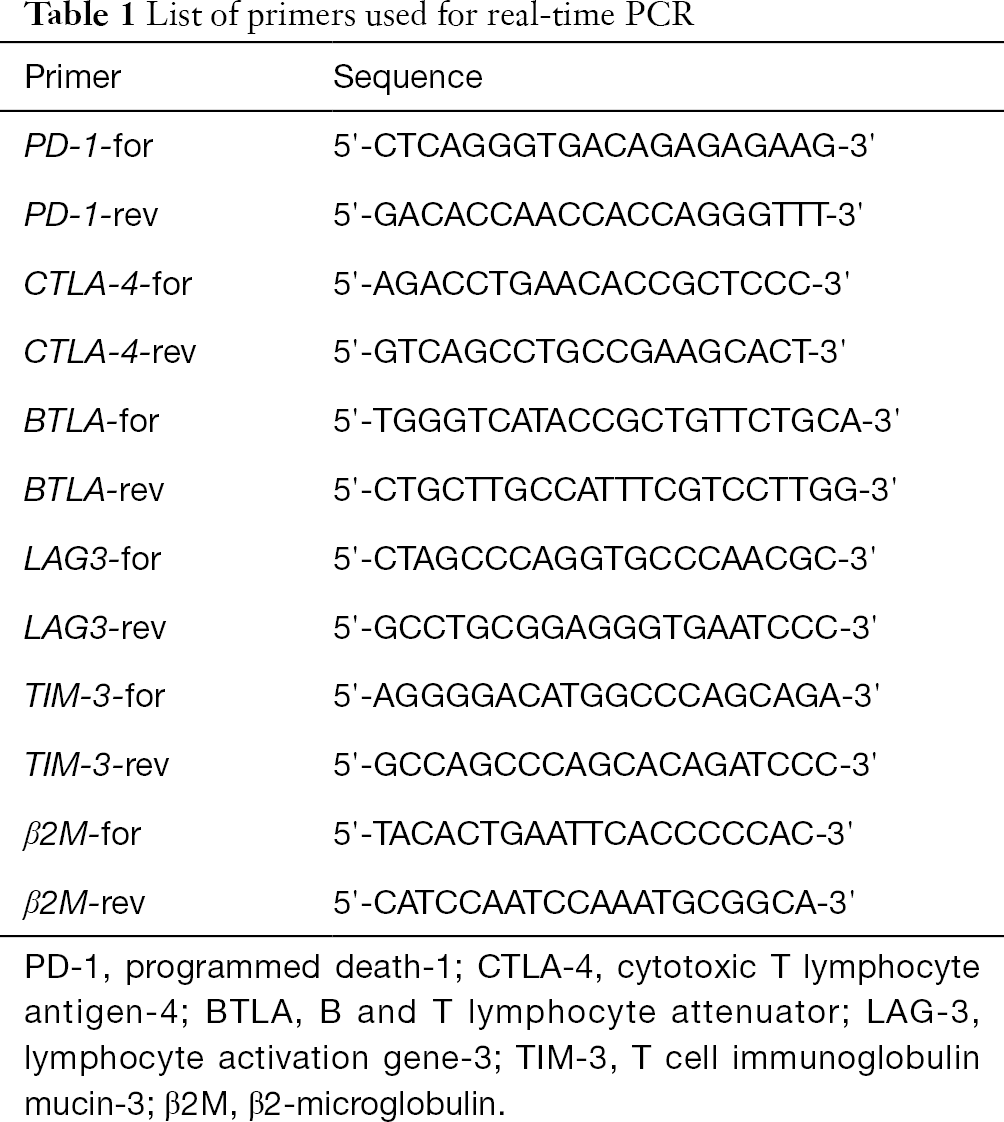 The Mann-Whitney test was used for analysis the differences of gene expression between CB and PB groups. Data are represented by medians. Spearman’s rank correlation test was used to analyze the expression levels of all of the detected genes in this study. Differences were considered statistically significant with a P<0.05.

The expression levels of all five T cell inhibitory receptor genes, PD-1, CTLA-4, Tim-3, LAG-3 and BTLA were compared between 15 cases of CB samples and PB samples from 22 cases. Significantly, the expression level of PD-1 (median: 0.002, P=0.000), CTLA-4 (median: 0.001, P=0.000), LAG-3 (median: 0.023, P=0.000) and BTLA (median: 0.85, P=0.000) were lower in CB group compared with PB group (Figure 1A,B,C,D). While the expression level of Tim-3 was similar between CB and PB (median: 1.791 vs. 1.614, P=0.951) group (Figure 1E). Interesting, expression tendency of PD-1, CTLA-4, LAG-3 and BTLA genes looks paralleled between CB and PB (Figure 1F,G). We further analyzed the correlation of expression levels between the five genes respectively, positive correlation of gene expression levels was found between PD-1 and CTLA-4, PD-1 and LAG-3, CTLA-4 and LAG-3 respectively (Figure 2). The remains had no significant correlation. While, positive correlation was found only between LAG-3 and TIM-3 in healthy individuals. Overall, the findings indicated that lower expression of most T cell inhibitory receptors is one characteristic in CB, this provide a novel information for the immunotherapy by using CB T cells. This may be due to higher numbers of naive T cells and non-activation status of T cells in CB (5). And it seems not complementary of expression regulation between different T cell inhibitory receptor genes. However, it is interesting, why there is not different in the expression level of TIM-3 between CB and PB? It is needed further investigation.

There are few studies regarding expression of T cell inhibitory receptors in CB. Most studies focused to characterize the distinctive nature of CB T cells after stimulation, which is expected to explain the reason related to graft-vs-host disease (GVHD) or disease relapse after HSCT, etc. For example, reduced surface and intracellular expression of CTLA-4 in stimulated (with anti-CD3 and anti-CD28 monoclonal antibodies) CB T cells were detected in comparison with adult PB controls. Inhibiting CLTA-4 expression in CB T cells may contribute to favorable CB T cell allogeneic responses (13). Increasing PD-1 expression on CD4+ T cells is associated with increased risk for mortality allogeneic HSCT, especially with CB transplantations (14). While significantly higher number of PD-1+ CD8+ T cells was detected in pediatric patients who subsequently experienced leukemic relapse in CB stem cell transplantation (SCT) (15). Whether these results are related to the original feature of lower T cell inhibitory receptor expression in CB T cells, it remains an open question. It may be worthy to dynamically detect and try to find out the range of different expression level and the change of the T cell inhibitory receptor expression pattern in CB T cells before and after transplantation, which may explain the reason. Moreover, increasing data showed that CAR-T cells had made great successfully for implementation of cellular immunotherapy for high-risk leukemia and lymphoma patients (16-20). However, T cells from patients with leukemia and lymphoma which expose in leukemia bone marrow or tumor microenvironment, acquire a senescent and exhausted phenotype, leading to a progression towards terminal differentiation (10,21,22). Particularly, upregulation of T cell inhibitory receptors like PD-1 and Tim-3, etc. results to significantly inhibit T cell activation, this may influence the CAR-T function which are produced from such patients T cells, it might have less effectiveness to attack leukemia and lymphoma cells (18,23,24). Thus, allogeneic derived CAR-T cells may avoid this barrier. And CB are one of attractive, allogeneic T cell and NK cell source for a novel approach to immunotherapy using engineered CB-derived T cells or NK cells (3,4), in particularly, in this study, we showed that low expression of T cell inhibitory receptors may support its advantage as source for CAR-T production.

We firstly characterized the expression profile of PD-1, CTLA-4, Tim-3, LAG-3 and BTLA in CB, and concluded their different expression pattern from PB. The significance on lower level of such T cell inhibitory receptor in CB is worthy to further discuss their role on T cell immune response when CB is used in SCT as well as in cellular immunotherapy.

Ethical Statement: The authors are accountable for all aspects of the work in ensuring that questions related to the accuracy or integrity of any part of the work are appropriately investigated and resolved. The study was approved by the Ethics Committee of the first affiliated hospital of Jinan University {No. [2015]009}. All of the experiments were conducted with the understanding and the consent of each participant.