Given their essential role in governing cell fate, signaling pathways modulators are pharmacologically relevant targets for cancer and many other diseases. In cancer, a high incidence of relapse is largely attributed to cellular heterogeneity. Of the two common models postulated for such heterogeneity; mutation accumulation or stem cell populations losing the capacity to differentiate, the stem cell-like population hypothesis is particularly relevant for pediatric cancers, such as rhabdomyosarcoma. In pediatric cancers, the mutational burden is low because of the limited time cells have to accumulate cellular damage and the resulting DNA mutations. Therefore, identifying and understanding the biology of stem cell-like cell types is of utmost importance for clinical and therapeutic relevance. A recent manuscript by Hayes et al. in Cell Stem Cell describes the role of the van gogh-like 2 (VANGL2) protein in the regulation of self-renewal of tumor propagating cells (TPC), a stem cell like population, in rhabdomyosarcoma (4).

Rhabdomyosarcoma is a pediatric sarcoma that has two primary subtypes; embryonal (ERMS) and alveolar (ARMS). The Langenau group identified VANGL2 as a driver of TPCs by examining RNA sequencing results from primary rhabdomyosarcoma patient samples (5). This analysis identified several upregulated genes associated with the non-canonical Wnt/planar cell polarity (PCP) signaling pathway in both subtypes of RMS. This group included an essential regulator of Wnt/PCP signaling, VANGL2. VANGL2 proteins have well characterized roles in development and regeneration and display minimal cross talk with the Wnt/β-catenin signaling pathway (1,6).

Hayes et al. show that VANGL2 is highly expressed in both subtypes of RMS. This upregulation could be seen at the mRNA and protein level in human cell lines representing both ERMS and ARMS. VANGL2 mRNA upregulation was also seen in a majority of primary patient samples. However, the rarity of cells (<10%) positive for VANGL2 in primary samples indicated a functional heterogeneity in the cell types represented. VANGL2 depletion in human cell lines representing ARMS (RH30) and ERMS (RD) showed that VANGL2 was required for cell proliferation and morphology. The depletion of VANGL2 inhibited cell proliferation and decreased the percentage of cells in S phase. The expression of genes associated with progenitor like cells, such as PAX7, were down regulated and the expression of genes associated with differentiation, such as MYOD, were upregulated upon VANGL2 depletion. VANGL2 depletion reduced colony formation and induced differentiation in human RMS in vitro models. Xenograft assays were used to assess the role of VANGL2 in growth and differentiation of RMS in vivo and VANGL2 depleted cells showed decreases in tumor volume in both ERMS and ARMS. Excised tumors resulting from the VANGL2 depleted cells showed reductions in cellularity and fewer proliferative cells. Tumors showed no increase in cleaved caspase 3 expression, indicating that apoptosis was not active in these cells. Conversely, increases in skeletal muscle differentiation markers such as MYOD and MYOG were observed.

To gain additional insight into the role of VANGL2 within heterogeneous cell types in RMS, human cell lines representing ERMS (RD) and ARMS (RH30) were assessed by immunofluorescence. While only a fraction of RMS cells expressed VANGL2, this population was actively dividing, unlike cells with low levels of VANGL2, which appeared non mitotic. Interestingly, the majority of VANGL2+ cells showed a subcellular localization like what is seen during normal development in polarized, actively dividing satellite cells, the muscle stem cell precursors (8). VANGL2+ cells co-expressed a marker for progenitor cell fate, PAX7. VANGL2+ cells also expressed high levels of additional gene expression markers associated with progenitor like properties of RMS cells. These data led the Langenau group to propose that VANGl2 may both be a marker for TPCs and required for TPC renewal.

VANGL2 depletion was also found to strongly inhibit 3D rhabdosphere colony formation, an assay used to estimate self renewal, suggesting that VANGL2 was required for maintenance of human RMS TPCs. The role of VANGL2 in TPC maintenance was further supported using a zebrafish ERMS model. The Langenau group previously established a kRASG12D zebrafish model of ERMS that has been shown to share molecular and histopathological features with human RMS (9-11). Using this model, they showed that VANGL2 does not affect over all tumor formation, penetration or latency, suggesting that VANGL2 has minimal effects on tumor initiation. However, extreme limiting dilution analysis (ELDA) showed that VANGL2 expression increased the number of TPCs by 9-fold as detected by engraftment rates. A transgenic labeling strategy expressed mCherry under the control of the vangl2 promoter (vangl2:mCherry). This reporter showed that VANGL2 expression was correlated with robust engraftment and propagation of RMS. VANGL2 was also combined with the previously characterized myf5:GFP+ transgenic reporter (9). When transplanted at a limiting dilution, it was found that myf5:GFP+/vangl2:mCherry+ cells propagated ERMS with higher efficiency than myf5:GFP+ alone and led to a downregulation of muscle differentiation markers. In all transgenic studies, it was found that VANGL2 expression had to be correlated with less mature cell markers such as rag2:GFP+ or myf5:GFP+ to drive engraftment and propagation. More mature cells do not propagate ERMS, irrespective of the expression of VANGL2. Finally, the Langenau group showed that the RhoA protein acts downstream of VANGL2 to regulate the self-renewal and number of TPC cells. Together, the work shows the novel and essential role VANGL2 plays during TPC self-renewal and in establishing cell heterogeneity.

RhoA had been previously shown to regulate MYOD (12) and potentially ties the regulation of TPC proliferation and self-renewal with differentiation. We have shown that canonical Wnt signaling directly regulates the expression of MYOD through binding of β-catenin in the distal regulatory region (DRR) of the Myod promoter (13). The Langenau group has shown that MYF5 and MYOD are required for growth and self renewal in human RMS (14) and it will be important to further define the relationship between VANGL2/RhoA and the MYOD transcription family members in driving RMS tumor growth.

Our lab has focused extensively on the role of the T-box protein TBX2 to drive the proliferation and tumorigenicity of RMS cells (21,22). We have shown that TBX2 regulates cell proliferation through the direct repression of CDKN1A, CDKN2A, and PTEN. In lung, Wnt/β-catenin signaling is shown to be downstream of TBX2 and TBX3 proteins, which modulate Wnt signaling through the repression of the Wnt antagonists Frzb and Shisa3, respectively (23). In liver cancer, Wnt/β-catenin signaling is upstream of TBX3 and a critical mediator of β-catenin functions (24). These studies highlight the importance and interconnectedness of T-box proteins and Wnt signaling pathways in tumorigenesis across cell types. Recently, we have found that TBX3 represses TBX2 gene expression under the control of the PRC2 complex in RMS and skeletal muscle (25), connecting the role of the PRC2 complex in the regulation of Tbx proteins, Wnt signaling and stem cell self-renewal and differentiation. Could JARID2 and the PRC2 complex regulate the self-renewal and maintenance of TPC like cells in RMS? This and many additional questions remain to be explored in understanding the pathways that drive cancer growth and metastasis.

Understanding all aspects of cell growth and proliferation is essential for designing therapeutic strategies to effectively target cancer cells. The Langenau group’s important study reveals an unexpected role of the non-canonical Wnt pathway in governing TPC maintenance and proliferation. It remains to be explored how Wnt pathway deregulation connects with other known drivers of RMS proliferation (Figure 1). The discovery of the essential role of VANGL2 in promoting TPC growth and tumor initiation opens many new avenues of discovery in cancer and stem cell biology and offers new targets for therapeutic strategy design. 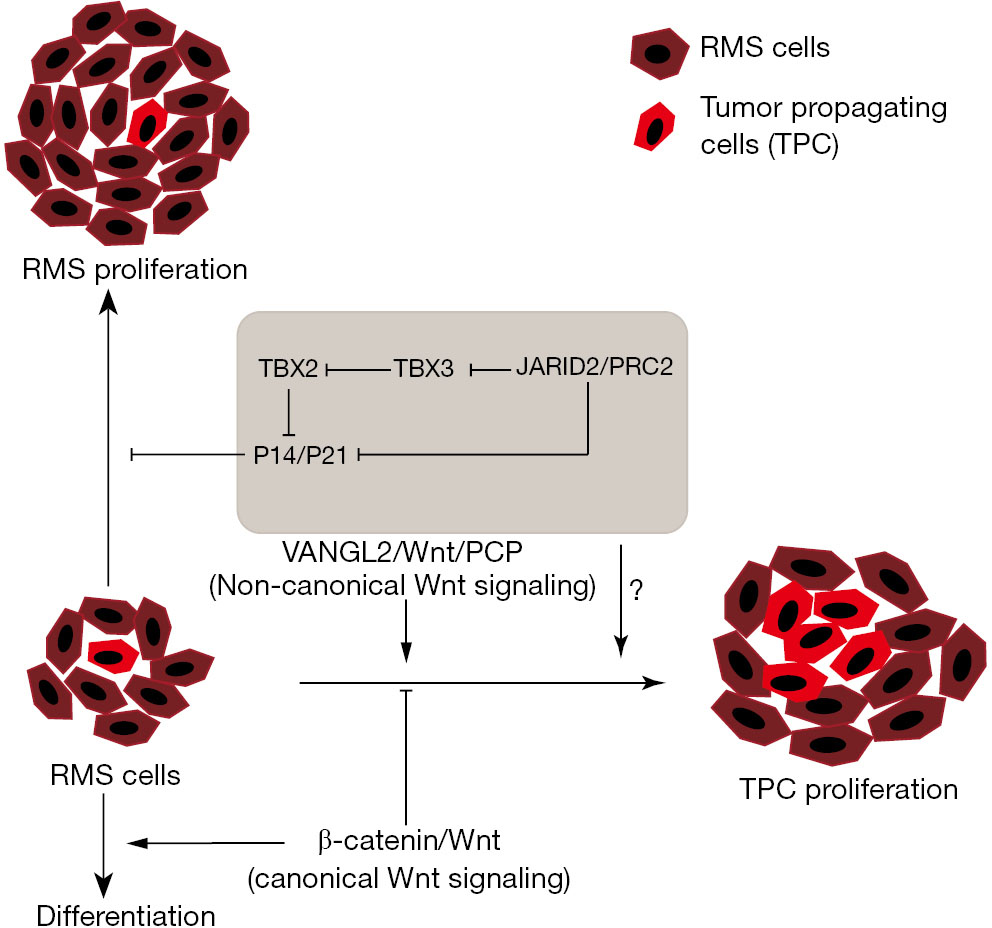