A major difficulty in retinal research is the lack of a sensitive and quantitative method to objectively determine the functional ability of the retina. Visual acuity and visual field testing are subjective methods depending on patient response. Fundus photography, fluorescein angiography and ocular coherence tomography (OCT) are imaging tests which are only indirectly related to functional ability and detect retinal damage relatively late in the disease process. Electrophysiologic testing is cumbersome to perform and difficult to interpret. The ability to objectively quantitate retinal changes after stem cell surgery at the microscopic level is a prerequisite for the development of advancements in therapies.

DLS technology has been used to predict the development of cataractogenesis in rabbits (2) and detect and monitor diabetes mellitus in humans (3,4). The results demonstrated the utility of DLS to noninvasively quantitate subtle changes at the molecular level.

A proof of concept instrument for making retinal measurements was developed. Illumination to the patient is provided by a helium-neon laser below the maximal permissible exposure as recommended by the American National Standards Institute, ANSI Z136.1 [2014] standard. The minimal amount of light necessary to make a successful measurement is used. The detection system is interfaced with a standard clinical fundus camera.

The scattered light is analyzed by a digital autocorrelator with an extended delay option for baseline determination. The intensity fluctuations are averaged over 2 seconds and the cumulant analysis method (5) used to analyze the resulting autocorrelation function. Diffusion coefficient, decay times and polydispersity factors, as a function of the sample time, are also calculated.

DLS has been used to assess various physiologic parameters in biologic systems including assessment of diffusion coefficients of diffusing Red Blood Cells (RBC) and to differentiate their shapes (6). DLS has uses in assessing particle size and degrees of variation in aggregates in drug products such as formulated insulin (7).

The correlator uses the received counts to solve the equation following for the autocorrelation function Cm(t):

i = index number whose range is one to the total number of intervals.

pi = number of pulses occurring during the ith time interval.

m = integer whose range is one to sixty-four.

Using the above equation the correlator generates solutions or points (one for each value of m) in a time sequence with each measurement separated by the value of t. The diffusion coefficient (D) is related to the correlation function Cm(t) by the following equation:

A, B = constants dependent on the physical details of the measurement.

K = scattering constant for the eye which is 4π/λ (sin θ/2) where λ = wavelength and θ is the scattering angle.

m = an integer whose range is one to the number of correlator channels.

Therefore, values of the diffusion coefficient D and the constants A and B above are determined from the autocorrelation curve produced by the correlator using standard curve fitting and analysis techniques.

Seventeen patients were tested using this device and no significant differences were seen between right and left eye measurements in patients with normal eye examinations. In addition, the results, periodically taken over a 6-month time span, were not significantly different, demonstrating a reproducibility and consistency of measurement.

SCOTS is non-randomized, open labeled study evaluating the efficacy of BMSC in ophthalmic disease. All patients enrolled in SCOTS after meeting eligibility criteria receive active treatment. There is no sham or placebo arm. Bone Marrow is aspirated from the posterior Iliac Crest and processed with minimal manipulation providing Bone Marrow Derived Stem Cells as a stem cell fraction.

The protocols for treatment in SCOTS are being continued in the Stem Cell Ophthalmology Treatment Study II or SCOTS 2, also IRB approved and registered with NIH Identifier NCT 03011541.

Having documented, objective damage to the retina or optic nerve likely to remain OR that is progressive. Visual acuity is typically less than or equal to 20/40 best corrected AND/OR the patient may exhibit an abnormal visual field.

SCOTS has three arms of treatment with assignment of treatment made after assessment of degree of vision loss, cause of vision impairment and evaluation of risk factors in conjunction with the ocular status and health risks for the patient. If both eyes are eligible than bilateral treatment is offered. No immunosuppression is necessary as the cells provided are autologous.

Arm 1 includes injection of the stem cell fraction in the retrobulbar and subtenons spaces with the remaining concentrate infused intravenously. In SCOTS, approved patients with mild to moderate vision loss or more severe vision loss in situations that are not appropriate for intravitreal or surgical interventions, such as the presence of silicone oil, are typically offered Arm 1. Retrobulbar placement is approximately 3 cc of concentrate; approximately 1 cm3 is used for subtenons injection and the remaining approximately 6 cm3 is provided intravenously. In SCOTS 2, Arm 1 is now the preferred approach for most all patients.

Arm 3 is reserved for patients with severe vision loss in focal retinal disease such as maculopathies or in patients with optic neuropathy. Visual loss typically is 20/200 or worse in the eye treated. This eye receives a core pars plana vitrectomy with approximately 0.1 cm3 of stem cell concentrate either subretinal or intra-optic nerve depending on the condition. Arm 3 treats the contralateral eye, assuming eligibility, with the Arm 1 approach. After injections the remaining stem cell fraction is provided intravenously. Monocular patients are not considered for Arm 3.

Careful explanation and response to questions is provided in the informed consent process. Participating patients are provided an extensive discussion during which the experimental nature of the procedure is stressed. All procedures are performed in a fully licensed ambulatory surgery center as an outpatient by the Principal Investigator (JNW).

An eye examination is completed the day prior to surgery, on the first post operative day, and depending on the treatment Arm, on the 3rd post operative day by JNW. Patients may follow up with their own ophthalmologists or optometrists at 1, 3, 6, and 12 months post treatment.

Our recent paper reports results in 19 eyes with nonarteritic ischemic optic neuropathy (NAION) following treatment in SCOTS (8). The age of the patients averaged 69.8 years. Visual loss was present an average of 9.8 years ranging from 1 to 35 years. Retrobulbar, subtenons and intravenous BMSC or, pars-plana vitrectomy, intra-optic nerve, subtenons and intravenous BMSC were used in the treatment. Vision measurement with Snellen chart and conversion to LogMAR was used for assessment.

Statistically significant improvements in visual acuity was shown after treatment. 80% of patients experienced improvement in binocular vision (P=0.029) measured with Snellen acuity, 20% remaining stable. A total of 73.6% of treated eyes showed gains in vision (P=0.019) with 15.9% remaining stable during the follow up period. The average improvement across eyes was 3.53 Snellen lines of vision improvement. Using LogMAR showed an average 22.74% and maximum 83.3% improvement of acuity per eye. An average of 0.364 in treated eyes was noted on LogMAR (P=0.0089). Improvements were typically noted within 6 months of the procedure.

DLS testing was obtained on one of the patients participating in SCOTS and reported in the paper on NAION. A 69-year old man with a 16-month history of acute visual loss of the left eye (OS) to counting fingers (CF) at 6’, diagnosed with NAION, acutely lost vision in his right eye (OD) 8 months later to CF at 3’, also secondary to NAION. His medical history was significant for Non-Insulin Dependent Diabetes Mellitus (NIDDM) (Hemoglobin A1C 6.9) and hypertension. He was status post two episodes of cerebral vascular accident (CVA) in 2009.

Following detailed informed consent, the patient enrolled in SCOTS. At the preoperative examination the visual acuity was CF 3’ OD and CF 6’ OS, ETDRS OD 5/200-3, OS 5/160+1. The ophthalmic exam was also significant for mild cataract in each eye (OU), bilateral posterior vitreous detachments, bilateral optic atrophy, and slight bilateral diabetic retinopathy (a few small retinal hemorrhages were noted in each eye). The visual field demonstrated severe field loss OD greater than OS (Figure 1). He was scheduled for SCOTS Arm 1 in each eye and underwent the procedure the next day without complication. 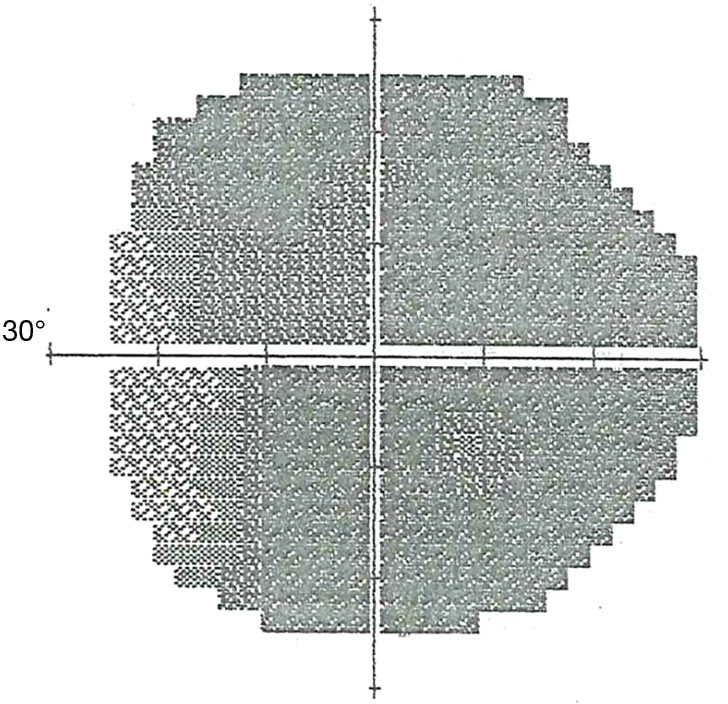 The patient returned at 2 months postoperatively for his follow-up examination. The visual acuity at this time was CF 3’ OD and CF 6’ OS, ETDRS OD 5/200-2, OS 10/200-2. The patient’s wife reported that his ambulation and function had improved. The ophthalmic examination including OCT and fundus photography, was unchanged. The DLS measurement (diffusion coefficient) was 3.62 E3 OD and 3.04 E3 OS. 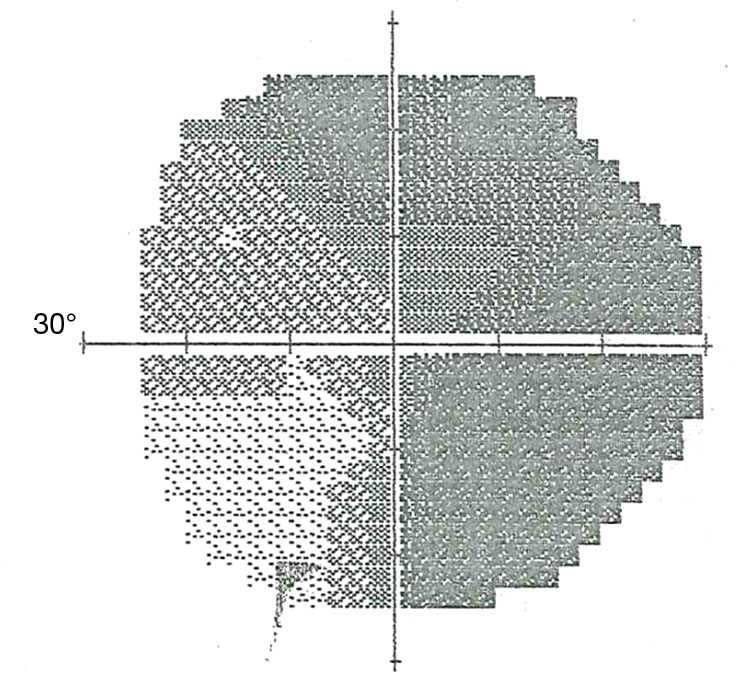 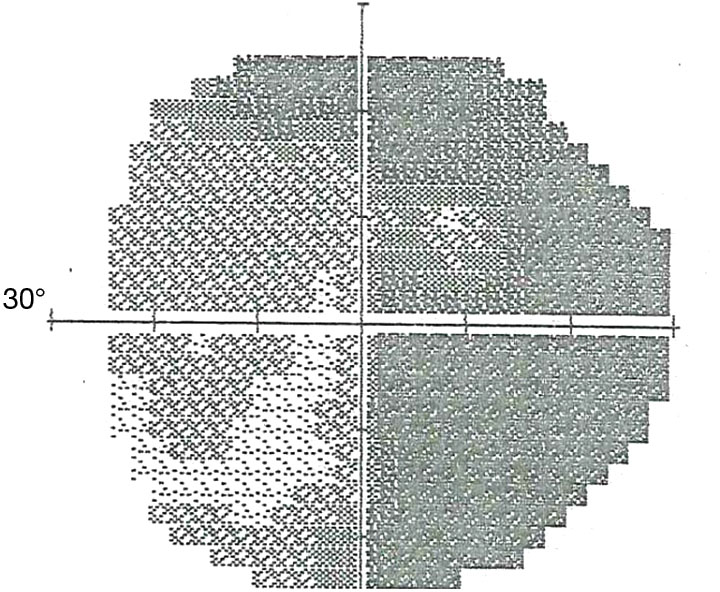 This paper reports the improvement in vision in a patient with visual loss secondary to NAION as a result of treatment within SCOTS. In addition, this is the first report of DLS quantitatively detecting visual improvement following stem cell surgery in the absence of changes in imaging as observed by standard ophthalmologic testing. Though early baseline measurements were similar, the greater visual improvement of the patient’s left eye as compared to the right eye was also detected by the DLS device. This greater increase in diffusion coefficient OS than OD may also indicate a predictive value of this technique.

The ability to quantitatively and objectively detect molecular changes, before they become observable by standard imaging techniques can allow the early detection and monitoring of patients undergoing diagnostic and therapeutic procedures, including stem cell surgery. Other potential uses may include the ability to time compress studies of new pharmaceuticals (as molecular effects should antedate the physiologic effects seen by imaging studies), and to predict, monitor and determine the efficacy of tumor treatment.