University of Louisville Cancer Research Team: in search of a prophylactic vaccine for human cancer prevention

For more than a century, cancer vaccine research has been persistently conducted by researchers world-wide. The idea that vaccination of animals with fetal material might prevent the outgrowth of tumors was first reported over a hundred years ago by the Schöne’s team (1). Over the past few decades, tumor immunologists have been making concerted efforts in designing a number of well-defined tumor antigens, followed by development of cancer vaccines from these antigens, and were continuously tested in animals and clinical trials. However, there remain a lot of unaddressed questions in terms of efficacy and safety of these vaccines for human use.

For years, the Cancer Research team at the University of Louisville (UofL) School of Medicine has been working on developing novel immune-based strategies for the treatment and prevention of cancer, including an immunotherapeutic approach that uses embryonic stem (ES) cell antigens as cancer vaccines. This time, Stem Cell Investigation (SCI) is pleased to invite the research team at the UofL’s James Graham Brown Cancer Center, featuring Dr. John W. Eaton, Dr. Kavitha Yaddanapudi and Dr. Chi Li, for an exclusive interview in regard to their cancer vaccine research.

The Cancer Research Team at UofL School of Medicine is focused on developing novel immune-based strategies for the treatment of cancer. Early-stage research in the lab has highlighted the potential use of ES cell antigens as a novel immunotherapeutic approach to vaccinate against cancer. Currently the lab is striving to unravel the mechanism of action of this vaccine and evaluate its potential use in preventing cancer relapse. 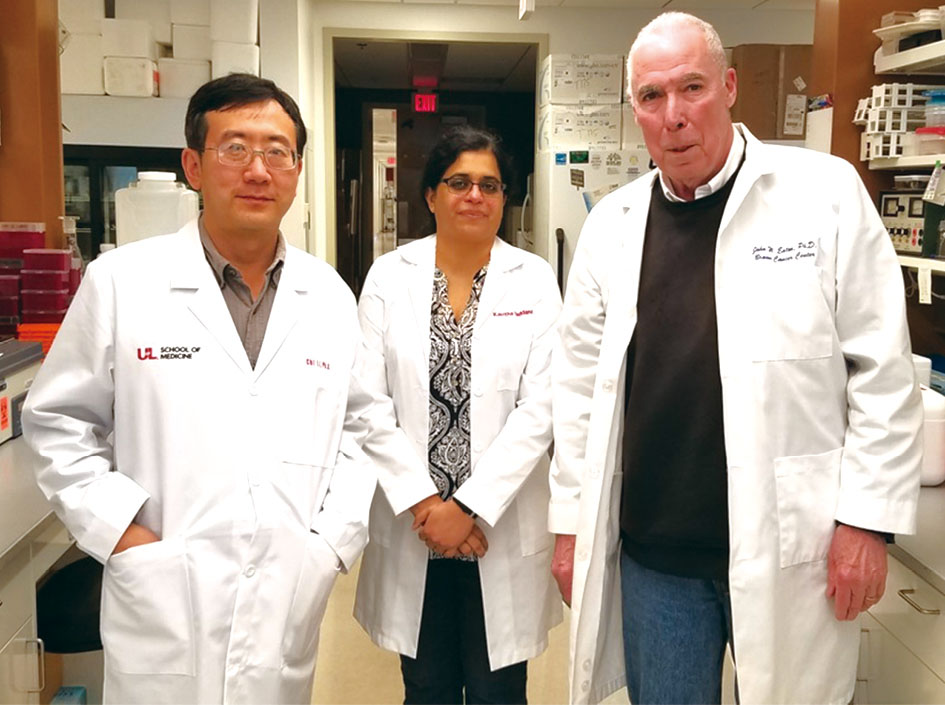 SCI: Would you give us an overview of the history of the development of cancer vaccines throughout the last century?

UofL Cancer Research Team: To our knowledge, the first experiments on this area were done by Georg Schöne in 1906 who observed that vaccination of mice with embryonic/fetal murine tissue would lead to rejection of transplanted tumors. It is not clear what motivated Schöne to do this but in the 1800’s the idea was floated that tumors arose from embryonal cells still present in adult tissues which went into business for themselves and formed tumors. Due to his untimely death in 1960, Schöne (b. 1875) is unavailable for interview. The one review we know of is Brewer et al. (Experimental and Molecular Pathology 86:192-197, 2009); highly recommended for readers who enjoy a mix of boredom and levity. In 1927, studies showed that mice immunized with fetal skin resisted the growth and metastasis of coal tar-induced carcinoma. Following this, a number of investigators reported that immunization of animals with early embryonic material consisting of irradiated cells from syngeneic donors would suppress or prevent the growth of transplantable tumors as well as tumorigenesis caused by viral and chemical agents. Immunization of rabbits with extracts of human gastrointestinal (GI) tumors produced antibodies which, after immunoadsorption against normal adult gut, cross reacted with GI adenocarcinomas and fetal/embryonic gut and pancreas (first reported as the co-called ‘carcinoembryonic antigens’). Interestingly, >80% of sera from humans with GI tumors and sera from women in the first two trimesters of pregnancy were found to have similar cross-reacting antibodies. Subsequent investigations indicated that the presence of these “onco-fetal” antigens might be almost universal. Klavins et al. reported that antisera raised in rabbits against an emulsified whole human embryo (6–7 week)—adsorbed against adult human tissues—recognized a variety of human tumor types including skin, bronchial, renal, colonic, hepatic, lung and breast. Similar to earlier observations in mice, no cross-reactivity with normal adult tissues except skin was found. In subsequent studies, oncofetal antigens were found in various animal and human tumor types. These observations support the concept that animals or humans immunized against embryonic material might be capable of recognizing and destroying neoplastic cells.

SCI: Your team has strived to develop a novel vaccination stratagem for lung cancer. What is the stratagem about? How has been the effectiveness/limitations of it?

UofL Cancer Research Team: Lung cancer was chosen as a general model for cancers in general. We chose it partly because we live in the state of Kentucky which has the greatest frequency of this cancer. Our choice was also informed by the work by others pointing to a stem cell origin of lung cancer. Studies of lung cancer biology have shown that there are many types of cells involved in creating tumors. In addition to the proliferating tumor cells, which make up the bulk, the tumor needs one other important cell type, i.e., the lung cancer initiating cells (CICs). The lung CICs are the tumor-generating cells and a never-ending source of daughter proliferating cells. CICs are highly aggressive and resistant to most of the current existing therapies. In lung cancer, CICs are a likely source of metastases—the major cause of cancer related deaths. Our initial idea is that primitive antigens shared by ES cells and CICs (and not present in adult tissues) can be used to generate a preventive vaccine. Our prediction is that vaccination with ES cells provokes an immune recognition of lung CICs and, thereby, will prevent tumor progression and recurrence. In earlier work, we vaccinated mice with irradiated, whole ES cells mixed with skin cells (fibroblasts), the latter expressing a factor called granulocyte-macrophage colony-stimulating factor (GM-CSF) known to stimulate the immune system (ES cell vaccine). This original vaccine was applied to mice and was 70–100% effective in preventing the outgrowth of implanted lung cancer and carcinogen-induced lung adenocarcinoma. Data from our labs now indicate that ES cell-induced anti-tumor immunity might involve, at least in part, the elicitation of an immune response against CICs. Because the use of GM-CSF expressing fibroblasts and whole ES cells was clumsy and difficult, we have now designed a cell-free vaccine.

SCI: What kind of challenges did you come across during the development of the stratagem?

UofL Cancer Research Team: Enough to keep us awake at night. The use of live ES cells—although irradiated—raises ethical concerns as well as the potential risks of inducing teratomas and autoimmunity. We have attempted to improve the safety and utility of this vaccine employing ES cells engineered to generate GM-CSF in amounts similar to those produced by the afore-mentioned fibroblasts. The most popular choices of the promoters for exogenous expression are derived from retrovirus, such as cytomegalovirus (CMV) promoter. Since ES cells transcriptionally repress the expression of retroelements, we had to identify an appropriate promoter to efficiently express GM-CSF in ES cells. We have purified exosomes produced spontaneously by these GM-CSF expressing ES cells, thereby producing a self-contained, relatively stable exosome-based vaccine and, hence, obviating the need for administration of intact, live ES cells. Exosomes are 40–100 nm membrane bound vesicles and contain intact protein and RNA molecules that are important for intercellular communication.

SCI: What action has to be taken to optimize or translate the current vaccine-based treatment strategies to attain durable responses immunity?

UofL Cancer Research Team: As described above, the vaccine has now been simplified. Our cell-free vaccination strategy with exosomes derived from ES cells (ES-exo vaccine) is very effective in preventing the outgrowth of a variety of tumors in mouse models of cancer with no detectable toxicity. In contrast to whole-cell therapy, exosomes can be delivered more readily as the formulation and their stability is similar to other biologics. The next step will be to produce it in human stem cells. While we have seen no evidence of toxic effects of this vaccine in mice, it will be necessary to carry out similar toxicity tests in normal humans. Regarding the durability of the immune responses to this vaccine in people given it as prophylaxis against cancer development we have no idea.

SCI: Would you introduce us to a current National Institutes of Health (NIH)-funded project that your team is involved in?

UofL Cancer Research Team: Exploiting similarities between ES cells and tumors, we have designed a vaccination strategy which is comprised of vesicles (exosomes) derived from ES cells that are engineered to express an immunostimulant to boost the immune responses. Our objective is to examine the efficacy and the mechanism of action of this preventive ES-exo vaccine to justify human trials of a similar prophylactic vaccine for lung cancer patients. Main findings of our research, thus far, include the following: (I) in this grant, we propose to develop a broad-spectrum cell-free prophylactic vaccine to prevent the onset and recurrence of lung cancer. Our vaccination strategy with irradiated whole ES cells is very effective in preventing the outgrowth of a variety of tumors in mouse models of cancer with no detectable toxicity; (II) vaccination of mice with cell-free ES-exo vaccine was 60% effective in preventing tumor outgrowth whereas all non-vaccinated control animals had developed palpable tumors by day 24 post-challenge. Importantly, ES-exo-vaccinated mice remained tumor-free for over 6 months indicating that the vaccine confers long-term protection. In contrast to whole-cell therapy, exosomes can be delivered more readily as the formulation and their stability is similar to other biologics. ES-exo are stable vesicles that can be tailor-manufactured from human cell lines in clinical grade quality in a timely fashion. Furthermore, ES-exo can be produced in large quantities in a cost-effective manner and cryo-preserved for more than 6 months in a freezer with their function intact. Therefore, in principle, a phase I clinical trial of this vaccine can be initiated as soon as there is sufficient evidence to support its activity in this context. Further optimization of this unique vaccination strategy will greatly increase the chances of its success in the clinic and for attaining durable responses in humans.

SCI: Your team has been working closely on different research projects. What role does each of you play within the team?

UofL Cancer Research Team: It is a strange team comprised of an immunologist (Kavitha Yaddanapudi), molecular biologist (Chi Li) and an anthropologist (John Eaton). We meet as often as necessary to update progress and bounce ideas of each other. Typically, these meetings are held in John Eaton’s office. What slow progress we’ve achieved has been generally a result of trial-and-error and the occasional crazy idea.

SCI: What are the most enticing aspects of research? What have been driving your team to keep making efforts and move forward in your research field?

UofL Cancer Research Team: This is a bit like what motivated early polar explorers. The overall hypothesis—the immunogenic similarities between embryos and tumors—seems to hold water. So, like the polar explorers, we are doing this work because it’s there. The lack of interest by some study sections in which our grant applications have been greeted by raucous laughter and jeers is, if anything, a stimulant.

UofL Cancer Research Team: The research we are pursuing will be deemed successful if it leads to a prophylactic vaccine for cancer prevention in humans. Key elements are ‘persistence, hard work and beer’.

We would like to express our sincerest gratitude to the members of UofL Cancer Research Team, including Dr. John W. Eaton, Dr. Kavitha Yaddanapudi and Dr. Chi Li, for sharing their insights and opinions with us.