Cutaneous metastasis from a solid tumor indicates the spread of cancer to the body surface. It accounts for 2% of all skin tumors, but the rate of cutaneous metastasis in patients with breast cancer is as high as 23.9% (1-3). To avoid this frustrating and burdensome situation, the clinical impact of cutaneous metastases is crucial, not only from an academic point of view, but also in improving patient management. The expressions of CD44+/CD24− and ALDH-1 on cell surfaces have been suggested to have tumor-initiating properties with stem cell-like and invasive features (4-6). Several experimental and preclinical studies have pointed out that cancer stem cells (CSCs) may be one of major key players to create genomic instabilities and are difficult to eradicate with anti-neoplastic agents (7-12). In our institute, a few breast cancer patients with cutaneous metastases during postoperative chemotherapy treatment were encountered. However, there are rare reports of cutaneous metastasis during chemotherapy after curative surgery. We hypothesize that these tumors are derived from residual CSCs with chemoresistant properties. In this study, we reported trends of expression of CSCs in primary and metastatic lesions which occurred during chemotherapy.

A 37-year-old woman was diagnosed with locally advanced cancer of the left breast in February 2011. She underwent a total mastectomy with axillary lymph node dissection due to multi-focal breast cancer (pT1N2). The pathology report showed that lymphovascular invasions (LVI) were present without dermal lymphatic involvement. The immunohistochemical analysis revealed HER2 immunophenotype and with positive expressions of the CSC markers, CD44+/CD24− and ALDH-1 (>90% and <10%, respectively) (Figure 1A and 1B, respectively). Adjuvant chemotherapy treatment with four cycles of anthracycline (AC) followed by four cycles of docetaxel (T) and 18 cycles of trastuzumab (H) were planned. However, after one cycle of T, multiple firm erythematous papules and nodules on the left previous skin incision site were noted which was subsequently confirmed as a metastatic ductal carcinoma in a punch biopsy. The expressions of CD44+/CD24− and ALDH-1 in metastatic cutaneous lesions after surgery were also positive (>90% and 20–30%, respectively) (Figure 1C and 1D, respectively). A few more cytotoxic chemotherapy sessions were applied, but eventually the disease metastasized to the brain and it was surgically removed. Expressions of CD44+/CD24− and ALDH-1 in the brain metastatic lesions were also positive with a slight increase in ALDH-1 (>90% and 30%, respectively) (Figure 1E and 1F, respectively). 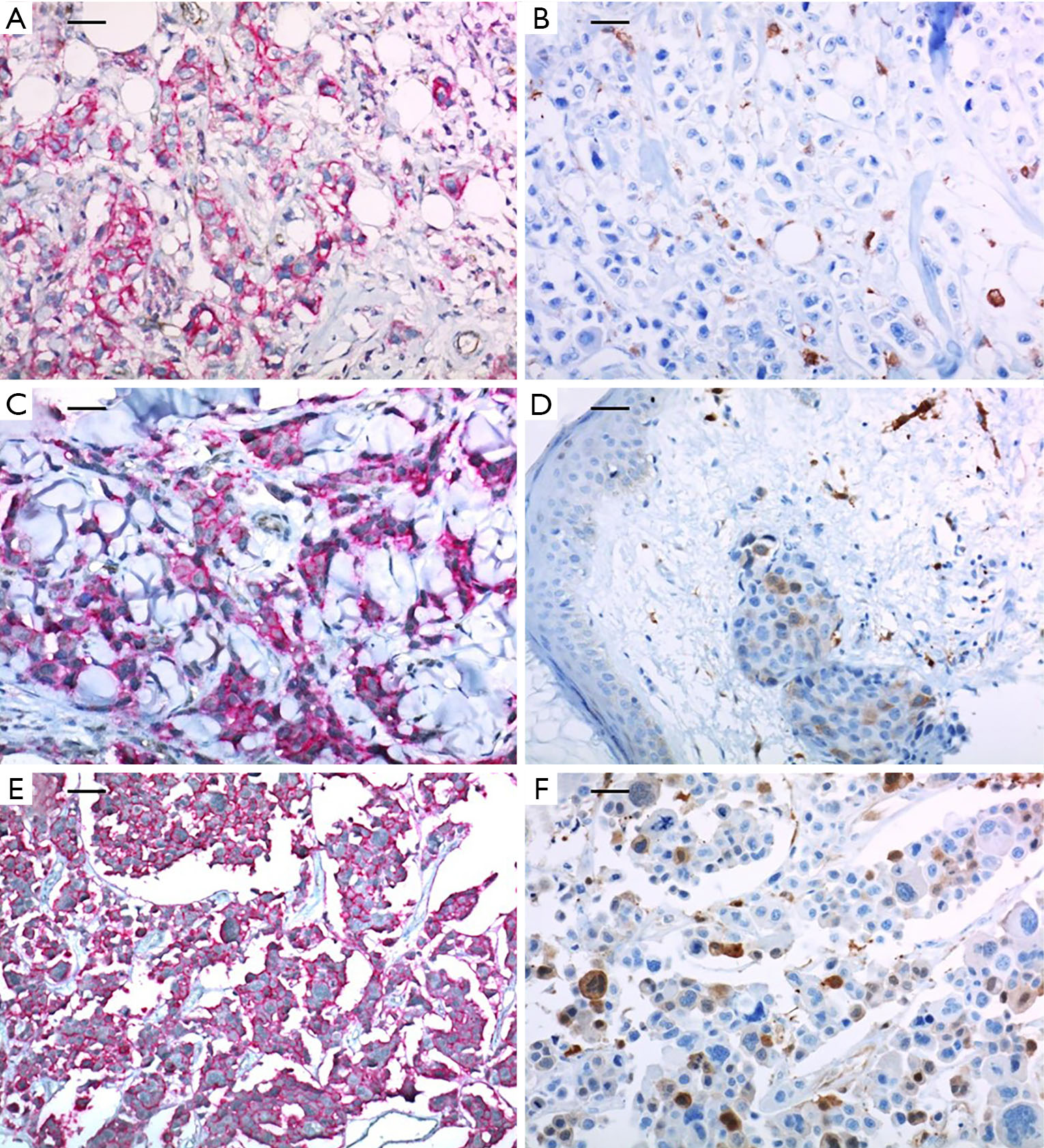 A 51-year-old woman diagnosed with invasive breast cancer had undergone a skin-sparing mastectomy with implant reconstruction in June 2016 (pT3N3). The intrinsic subtype of her breast cancer was triple negative but HER-2 showed strong membranous expression in the ductal carcinoma in situ component around invasive ductal carcinoma. Microscopic findings also revealed multiple LVIs. The expressions of CD44+/CD24− and ALDH-1 were positive (50% and 50%, respectively) (Figure 2A and 2B, respectively). She subsequently started adjuvant chemotherapy with four cycles of AC and followed by four cycles of T. After one cycle of T, diffuse erythematous patches were found with tenderness on the entire skin of the left breast. A punch biopsy of the lesion confirmed metastatic ductal carcinoma. The expressions of CD44+/CD24− and ALDH-1 in the metastatic cutaneous lesion after surgery increased to 60% and 60%, respectively (Figure 2C and 2D, respectively). Subsequently, she underwent several sessions of cytotoxic chemotherapy, but after two months, skin metastasis also occurred on the contralateral left chest wall. 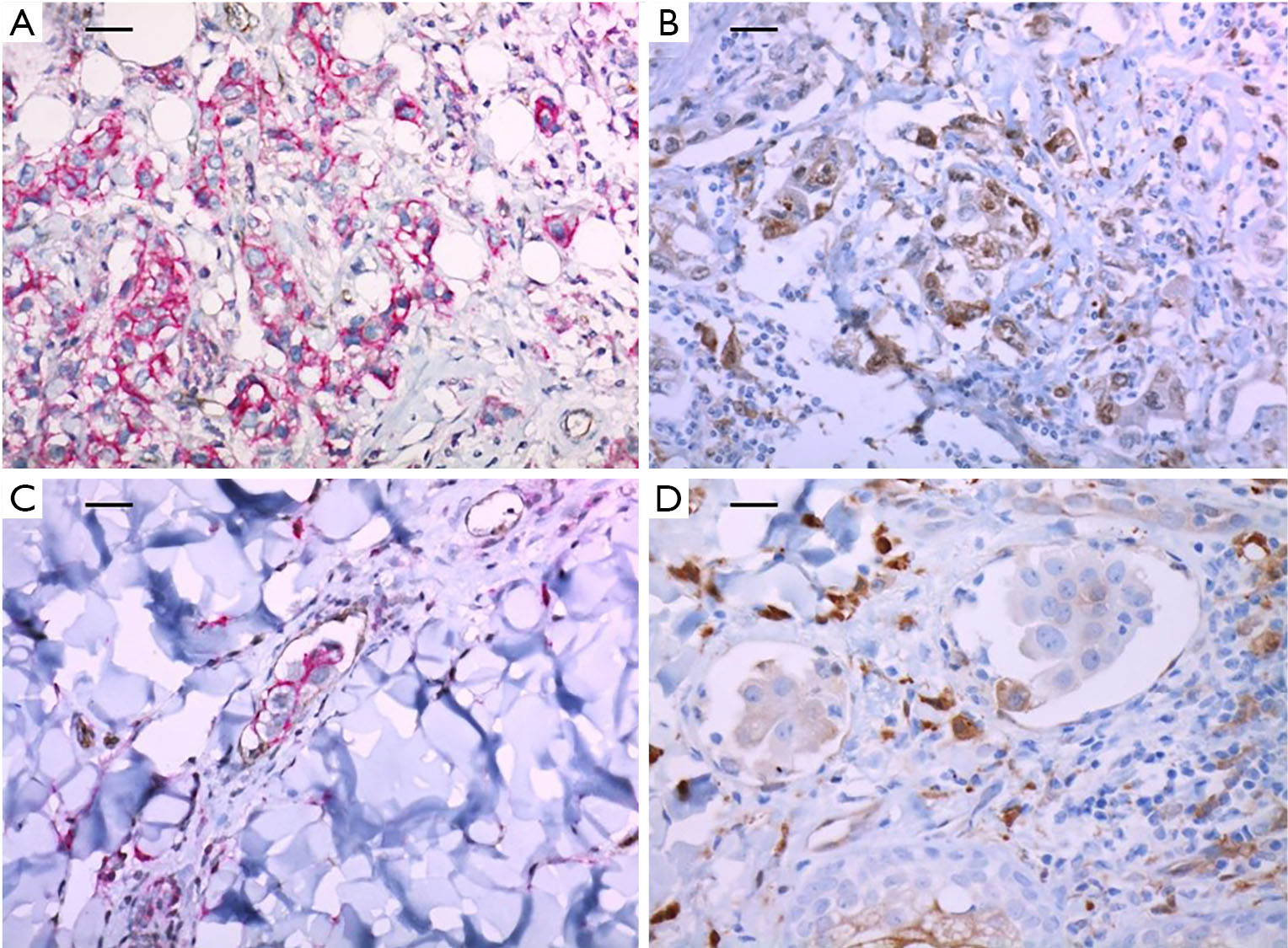 Several studies (13-17) have reported a relationship between CSCs and chemoresistance in human breast cancer tissues. Lee et al. (13) suggested the chemoresistant property of putative CD44+/CD24− and ALDH-1 to the conventional AC-based chemotherapy by demonstrating an increase in the proportion of CSCs after preoperative systemic therapy, and also significantly shorter disease-free survival (DFS) rate was observed compared to no change or decrease in the putative CSC population. Even though the survival rate was analyzed only in the non-pCR group, increased CD44+/CD24− and ALDH-1(+) population resulted with a worse survival rate. Seo et al. (14) analyzed the expressions of the breast CSC markers, CD44+/CD24− and ALDH-1(+), and clinical outcomes in HER-2 positive breast cancers which had been treated with surgery and additional adjuvant chemotherapy and trastuzumab. The study showed that CD44+/CD24− but not ALDH-1(+), was an independent prognostic factor for poor DFS and overall survival (OS) when adjuvant trastuzumab was applied. This could also imply that resistance to trastuzumab may be derived from CD44+/CD24− CSC cells. Other previous comparative studies (15-19) using paired human breast cancer tissues obtained pre- and post-chemotherapy, showed that CD44+/CD24− (17) or ALDH-1(+) (16) tumor cells increased significantly after chemotherapy. However, other literature detected no significant enrichment of ALDH-1(+) tumor cells (18) or even a reduction in CD44+/CD24− cells (19) after chemotherapy. However, the latter study (19) also reported that patients with tumors containing high numbers of CD44+/CD24− cells more frequently developed bone metastases in the course of the disease.

The molecular mechanisms underlying the roles of breast CSCs in chemoresistance have been reported in several studies (20,21) and proposed clinical implication for breast cancer therapeutics (22-25). The occurrence of a fraction of breast CSCs with increased multidrug resistance (MDR) affinity clinically may be an additional mechanism for the positive selection of breast CSCs during chemotherapy (20). Koshkin et al. (21) showed that in a certain range of concentrations of chemotherapeutic agents, MDR transports in breast CSC with improved affinity will be better saturated with substrate than those in bulk cells. Even without expression effects, MDR transport and chemoresistance in breast CSCs will exceed those in bulk cells. This difference provided an additional mechanism for the increase in breast CSC content in tumors subjected to chemotherapy. Van Phuc et al. (22) showed that down regulation of CD44 with siRNAs reduced doxorubicin resistance of CD44+/CD24− breast cancer cell and suppression of human breast tumors in NOD/SCIA mice by CD44 shRNA gene therapy combined with doxorubicin treatment (23). Bontempo et al. (24) suggested that molecular iodine was able to reduce the drug resistance and invasive capacity of mammary cancer cells exposed to doxorubicin and could be used as an anti-chemoresistant agent with clinical potential. Saha et al. (25) demonstrated that disruptions to the NFκB-IL6 feedback loop prevented CSC induction and sensitized preexisting CSCs to chemotherapy, so that combining aspirin and conventional chemotherapy might offer a new treatment strategy to improve recurrence-free survival of breast cancer patients.

Most translation studies regarding CSC expression were evaluated and compared in preoperative needle biopsies prior to chemotherapy and in post-neoadjuvant surgical specimens. However, due to the heterogeneity of breast cancers and the small population of CSCs, undetected CSCs can exist, especially in small samples such as needle biopsies. Also, in the setting of neoadjuvant chemotherapy, residual damaged cancer cells, not CSC, could be changed to CSC through reprogramming mechanisms (26-28), and increased CSCs after chemotherapy may be caused not only by proliferation of previous CSCs but also reprogrammed new CSCs.

In the two cases, although mastectomy was performed to completely remove both residual tumors and surrounding breast tissue, rapid cutaneous metastases occurred during chemotherapy. The primary breast tumors of the two cases showed LVI and relatively high expressions of CD44+/CD24− and ALDH-1(+). Expressions of CSCs had increased in metastatic cutaneous lesions during chemotherapy. We hypothesized that in operation fields normal cutaneous stem cells could acquire more aggressive proliferative properties with cancer stemness in spite of chemotherapy, or dysregulated cells with self-renewal could undergo cutaneous metastasis. Although we cannot rule out the fact that the dramatic deterioration reflects the natural course of an extremely unfavorable breast cancer variant, the temporal coincidence is highly indicative of the causative role of CSCs. This underlines that more clinical data are needed to assess whether cancer stemness can be carried out in the chemotherapy resistance.

Informed Consent: Written informed consent was obtained from the patients for publication of this Case Report and any accompanying images.