The gastrointestinal (GI) tract is a complex organ system derived from a simple hollow long tube generated in early human development. The GI tract is developed by a series of complex mutual interactions among several types of cells derived from all three germ layers during development (1). Intestinal epithelial tissues are derived from the definitive endoderm (DE), which is differentiated into the foregut, midgut, and hindgut (Figure 1). The foregut gives rise to the esophagus, stomach and upper duodenum, while the midgut and hindgut give rise to the lower duodenum-proximal transvers colon and the distal transverse colon-rectum, respectively (2). The endoderm forms a sheet-like simple epithelium adjacent to the mesoderm, and their morphological dynamics give rise to the gut tube. Smooth muscles, and the vascular system are derived from the mesoderm, whereas the enteric nervous system is derived from the neural crest migrated along the gut tube. Regional identities of the DE originate from the reciprocal signaling involving growth factors such as WNTs, fibroblast growth factors (FGFs), and bone morphogenetic proteins (BMPs). Several tissue specific transcription factors such as SOX2 and PDX1 in the stomach and CDX2 in the intestine have already been identified (2) (Figure 1). The HOX genes are a well-known gene cluster that plays a role in vertebrate anterior to posterior (A-P) patterning. BMP signaling regulates HOX genes that are expressed and regulate A-P patterning in vertebrate gut development (3). GI diseases affect any section of the GI tract from the esophagus to the rectum. In vitro modeling systems for the human GI tract allow studies on physiological functions as well as severe intestinal disorders including digestive system neoplasia, inflammatory bowel diseases, and congenital diseases such as Hirschsprung’s disease. 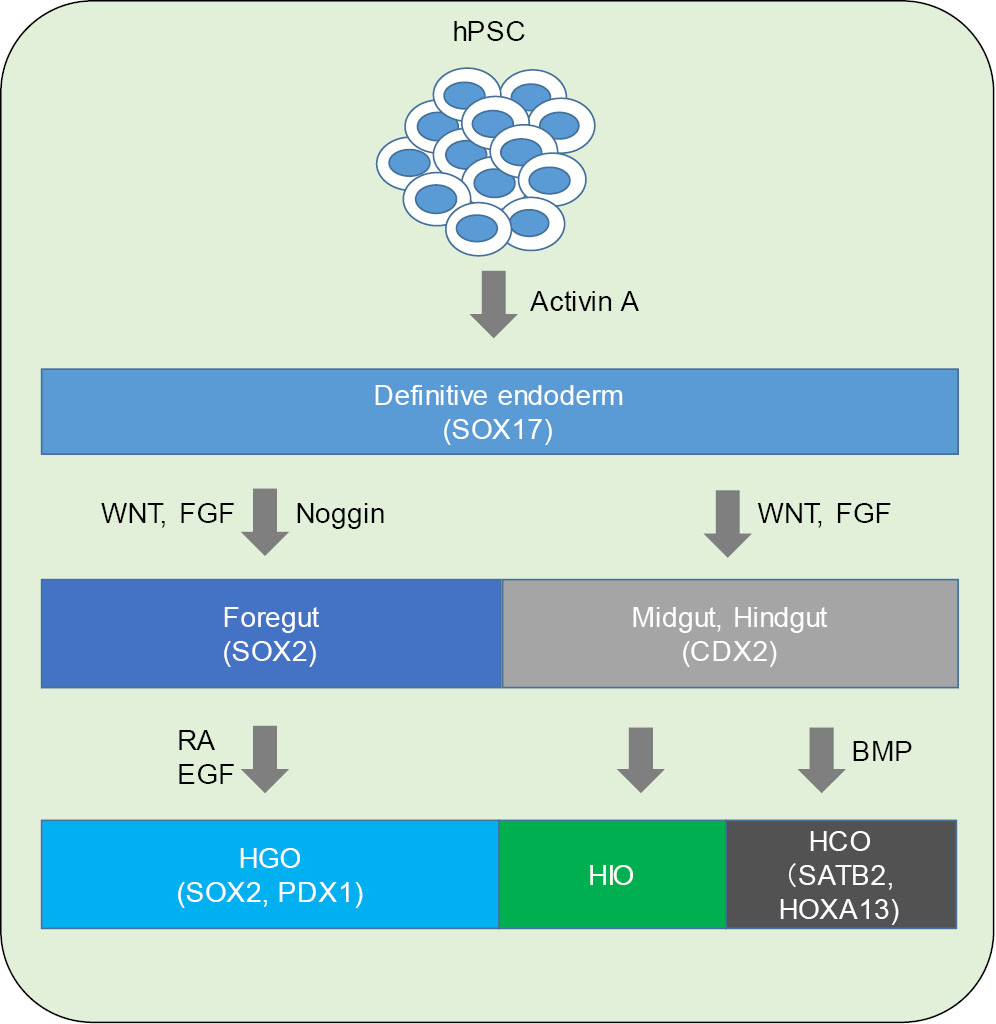 Figure 1 To obtain intestinal epithelium, activin A could be used to differentiate hPSC into definitive endoderm (DE). This SOX17-positive DE could be differentiated into foregut, midgut, and hindgut. The SOX2-positive foregut gives rise to stomach (HGO), while the CDX2-positive midgut and hindgut give rise to the small (HIO) and large intestines (HCO), respectively. These regional identities were originated by several signaling factors, such as WNTs, FGFs, and BMPs. hPSC, human pluripotent stem cell; FGFs, fibroblast growth factors; BMPs, bone morphogenetic proteins.

As various types of cells in the GI tract are derived from all three germ layers, it has been difficult to study human intestinal development and disease modeling in vitro. Stem cell technology provides great opportunities to generate organ-like structures in vitro. In 2009, Sato et al. first generated a three-dimensional (3D) and self-organizing epithelial structure of the human gut from adult intestinal stem cells (4). In the last few years, researchers have struggled to create 3D organs, called “organoids”, including the intestine from human pluripotent stem cells (hPSCs) by mimicking their development (5,6). Organoids possess the following characteristics: (I) they consist of multiple tissue-specific cell types; (II) they form a functionally arranged structure as that in vivo; and (III) they show the organ-specific function of the living organism (7). Organoids are small and simple, but they can be used to study human developmental systems because they recapitulate human development, and have the advantage of mimicking the in vivo the state more closely than a monolayer model of human cells in vitro. GI organoids from hPSCs provide a platform for studying human intestinal diseases and for pharmacological testing. However, there are many issues including the necessity of supplementing with a variety of proliferation/differentiation signaling factors at different stages and long periods of cultivation, resulting in complicated operation. Moreover, the formation of a vasculature system is not included; thus, large sizes and long-term cultures are difficult to maintain.

To induce GI organoids in vitro, it is important to activate proper signals temporally to recapitulate human development. In 2011, Spence and colleagues generated human intestinal organoids (HIOs) from hPSCs (8). HPSCs were first differentiated into a SOX17 and FOXA2 positive-DE using activin A and then differentiated into a CDX2-positive hindgut lineage using FGF4 and canonical WNT activation. Intriguingly, after few days of treatment with FGF and WNT, the cells budded off to form floating hindgut spheroids. The resulting 3D HIOs consisted of a columnar epithelium that was patterned into villus and crypt-like structures that expressed intestinal stem cell markers (8). Few years later, the same group generated human gastric organoids (HGOs) from hPSCs (9). As described previously, hPSCs were first differentiated into DE using activin A followed by differentiation into a SOX2-positive foregut lineage using the BMP-inhibitor Noggin combined with FGF and WNT, which resulted in 3-dimensional growth of spheroids. To direct the spheroids to a posterior foregut fate, they were exposed to retinoic acid (RA) in a semisolid matrix for differentiation into a SOX2/HNF1B-positive posterior lineage. For further differentiation, EGF was used to promote the robust outgrowth of SOX2/PDX1+ spheroids into HGOs. The resulting 3D HGOs consisted of primitive gastric gland-and pit-like domains and a set of cell types that constitute the antral epithelium (9).

In 2017, the same group directed hindgut patterning and generated human colonic organoids (HCOs) from hPSCs using BMP as an inducing factor (10). As previously described, they used activin A, followed by FGF4 and WNT signaling activation to induce the formation of mid-hindgut spheroids. First, they searched public data-bases to identify posterior gut markers, and found that the GATA4 and SATB2 expression boundaries observed in early development form the into future boundaries of the small and large intestine. They then identified that BMP signaling activation was sufficient to induce high levels of SATB2 protein in human intestinal spheroids. In addition, brief stimulation of BMP signaling in PSC-derived gut tube cultures is sufficient to induce a posterior HOX code and formation of SATB2-expressing colonic organoids. They found that BMP-treated organoids maintained a posterior identity even after prolonged culture (10). BMP signaling also patterns the mesenchyme and this mesenchymal patterning is stable even in the absence of epithelium. Furthermore, they observed that BMP-treated organoids expressed INSL5, which is a colonic enteroendocrine cell- specific marker, by NEUROG3 overexpression (10). They also engrafted HIOs and HCOs into immunodeficient mice to assess whether they retained their identity in vivo, and observed that the transplanted HIOs and HCOs developed into mature tissues that morphologically resembled either the small or large intestine, respectively (10). Importantly, in both the small intestine and large intestine, when inducing differentiation from hPSCs, an immature trait closer to the embryonic phase was retained compared to intestinal epithelial organoids established from somatic stem cells.

These gut epithelial structures were obtained using sequential induction with a panel of growth factors to first generate endoderm while suppressing the formation of other germ layers, and then inducing differentiation into specific intestinal cell types. Therefore, these protocols do not fully mimic the functional interactions of the three germ layers that occur during organogenesis in vivo. Co-culture of HIOs with hPSC-derived neural crest cells was one of the methods to generate an enteric nervous system in vitro (11). Recently Akutsu and colleagues generated 3D intestinal organoids that were composed of cells from all three germ layers (12,13). Their strategy was based on self-organization of PSCs. The hESCs/hiPSCs were cultivated on a micropatterned culture platform in differentiation medium containing IGF-1, heregulin-1b, and bFGF. By day 30, self-organized cystic spheroids began to detach from the plate, and were maintained over an extended period. These spheroids contained epithelial cells such as enterocytes, goblet cells, and Paneth cells, mesoderm-derived smooth muscle cells and an enteric nervous system. Moreover, they demonstrated intestinal functions, including peptide absorption, and showed innervated bowel movements in response to stimulation with histamine and anticholinergic drugs. It will be interesting to examine whether same signals could be adapted to this inducing system to clarify regional identities.

In 2017, another group reported colonic organoids derived from hPSCs. Similar to the method described previously, they first used activin A to differentiate hPSCs into DE, followed by FGF4 and WNT signaling activation to induce the hindgut endoderm (14). In contrast to the report by Múnera et al. in 2017, they added a BMP inhibitor in addition to the WNT activator and EGF to induce colonic organoids (COs). Intriguingly they compared the expression profiles of their COs with the human colon, and found that hPSC-derived COs closely resemble the human colon using hierarchical clustering analysis. Although they did not mention the maturity of their COs, they induced COs from induced pluripotent stem cell derived from patients with familial adenomatous polyposis and observed overactivation of WNT signaling associated with the hyperproliferation of colonic epithelial cells that is highly relevant to colorectal cancer. They applied a contrasting strategy to induce hind gut to colon organoids compared to that used by Múnera et al. in 2017, namely, activating or inhibiting BMP signaling. Most of the tissue specific markers that they chose were not the same. Thus, it is difficult to specify whether these organoids are the same. Although it is possible to further refine the differentiation method of hPSC-derived organoids, it is difficult to identify exactly what has been generated in vitro. Instead, it is important to focus on functionality, and determine whether the organoids recapitulate the human organ system for practical use in disease modeling, drug screening, and toxicological testing in vitro.

We can now generate hPSC-derived GI tissues in vitro. Developmentally, these 3D GI organoid systems provide clues to investigate fundamental questions regarding the establishment of regional identity. The GI organoids prepared by Múnera et al. and others can form stomachs, intestines, and colons similar to those in living organisms from undifferentiated pluripotent stem cells, and hence they can be applied to pathophysiological studies concerning intestinal intractable diseases and drug discovery and development. Moreover, because an orally administered preparation first undergoes absorption/metabolism in the intestinal tract, followed by transfer to the liver, an in vitro intestinal tract model is indispensable for testing drug pharmacokinetics and safety in the body. Small intestinal organoids with high identity and functionality, which were not realized in systems using conventional cell lines and animal models, have become innovative means of evaluating intestinal absorption, metabolism, and safety in drug discovery.