TGF-β: a master regulator of the bone marrow failure puzzle in Fanconi anemia

Fanconi anemia (FA) is a genetic disease mainly characterized by progressive bone marrow failure (BMF), congenital abnormalities, and increased predisposition to cancer (1,2). Although most patients with FA develop BMF generally during childhood, the molecular mechanism underlying BMF has remained elusive for a long time and is still a matter of debate.

The identification of 21 FA genes (FANCA-FANCT) whose products participate in the FA/BRCA DNA repair pathway, has contributed greatly to understanding the characteristic phenotype of FA cells, in particular, the chromosomal instability and hypersensitivity of these cells to DNA cross-linking drugs (3,4). Nevertheless, how disruption of this pathway results in BMF in patients with FA is unclear.

Known important factors in the development of BMF in FA

At the cellular level, a reduction in the number of hematopoietic stem cells (HSCs) in the BM of patients with FA (5) and the dysfunction of all hematopoietic lineages in these patients (6) indicated HSCs to be the primary cellular population affected during BMF in FA. Moreover, studies conducted in FA embryonic stem (ES) cells and induced pluripotent stem (iPS) cells have demonstrated that cellular defects in patients with FA are manifested both before and during the differentiation of the pluripotent precursors in the HSC compartment (7,8).

Previous studies on the molecular events leading to HSC attrition in the BM of patients with FA showed the high sensitivity of FA cells to oxidative damage (9). Another important discovery linking BMF to FA was that FA cells exhibited increased sensitivity to inflammatory cytokines such as tumor necrosis factor-alpha (TNF-α) and interferon gamma (IFN-ɣ) (10-15). Additionally, elevated levels of these cytokines in patients with FA and mouse models (10,16) and the demonstration that the exposure to these molecules in FA mouse models generates HSC dysfunction (11,12,17,18), constituted important findings in the elucidation of the molecular basis of BMF in FA. Recent studies revealed the role of cytokinesis defects in the development of BMF in FA, as evident by an amplified number of binucleated cells in FA BM cells (19,20).

Since FA cells are extraordinarily sensitive to interstrand crosslinking (ICL) agents such as mitomycin C (MMC) and diepoxybutane (DEB), the association between these agents and the development of BMF in patients with FA was suspected for a long time. However, these agents are not produced endogenously by the organism and therefore, the above hypothesis could not be confirmed until the genotoxicity of acetaldehydes, an endogenous source of ICLs, in FA HSCs was demonstrated (21,22).

Recently, a new component participating in the development of BMF in FA was discovered. It was found that the presence of a physiological stress such as infection or chronic blood loss could lead to the exit of HSCs from dormancy, thereby provoking DNA damage in these cells. This suggested that the continuous activation of HSCs from quiescence is responsible for the attrition of HSCs in FA (23).

The above-mentioned observations and the exacerbated apoptotic response of FA cells to replicative stress and unresolved DNA damage (5) provided significant evidence for a multicomponent puzzle responsible for the occurrence of BMF in FA.

Consistent with the notion that the transforming growth factor-beta (TGF-β) pathway plays a critical role in modulating the quiescence and self-renewal of HSCs [see review in (24)], a recent finding published in Cell Stem Cell by Zhang and co-workers (25) has added a novel and important piece of information to the puzzle of molecules involved in BMF in patients with FA (Figure 1). 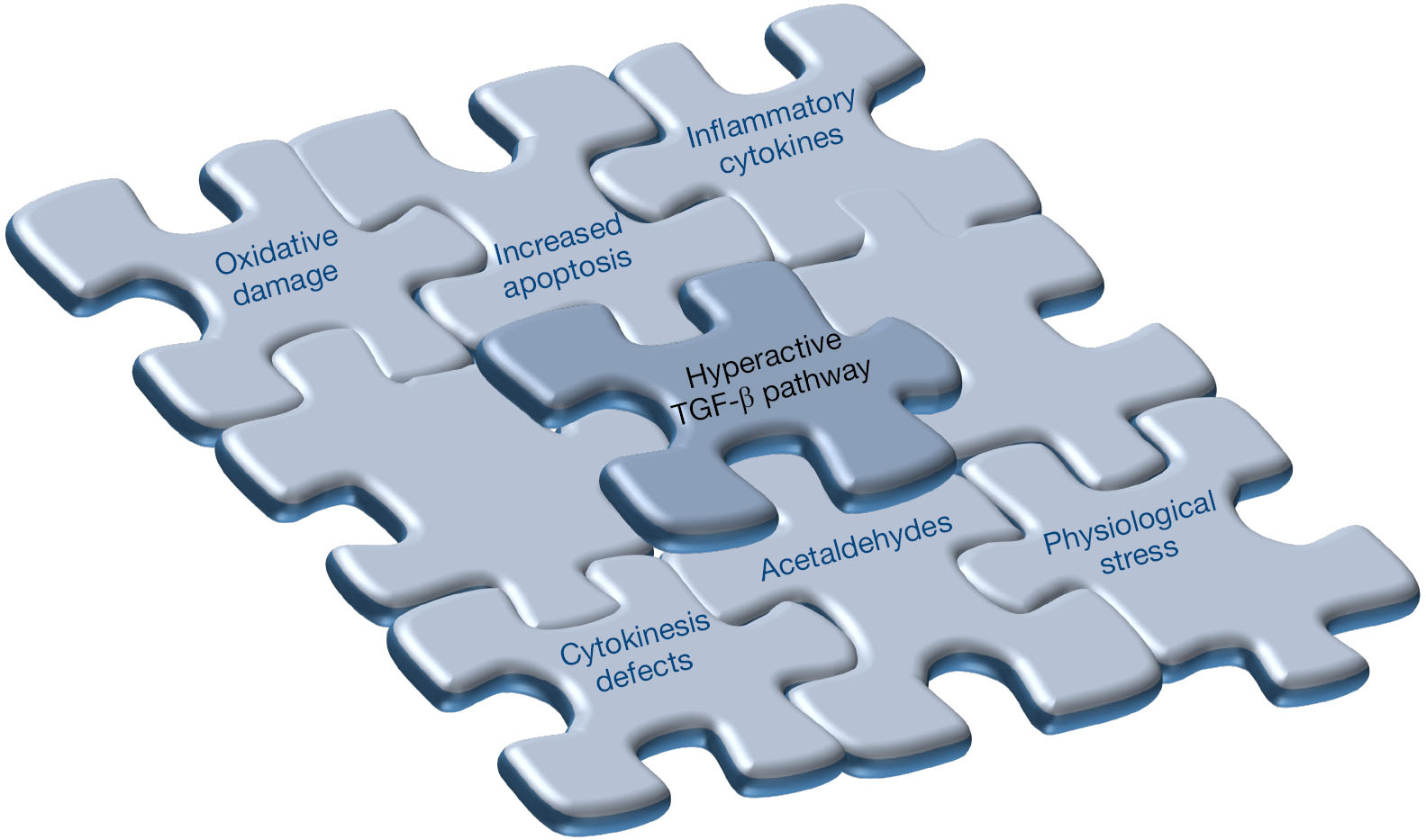 Figure 1 The multicomponent puzzle of bone marrow failure (BMF) in Fanconi anemia (FA). The presence of a hyperactive TGF-β pathway constitutes a novel and key piece to explain the BMF feature of FA. Other important components of this puzzle, including oxidative damage, inflammatory cytokines, increased apoptosis, cytokinesis defects, endogenous interstrand crosslinking agents (acetaldehydes) and physiological stress have already been described. Future studies would help to unravel the existence of novel and essential components of the intriguing puzzle of FA-associated BMF.

In the abovementioned study (25), the authors aimed at identifying the genes involved in MMC-mediated hypersensitivity of fibroblasts derived from patients with FA group A (FA-A), by a genome-wide short hairpin RNA (shRNA) screening. Several genes involved in the TGF-β pathway, including SMAD3, BMP2, and PDCD4 were among the top hits.

With the aim of demonstrating the role of the TGF-β pathway in the functional properties of mouse and human FA HSCs, the authors followed a similar approach, using HSCs from FA complementation group D2 mutant (Fancd2−/−) mice and patients with FA. It was observed that suppression of the TGF-β pathway with either Smad3 shRNAs or neutralizing antibodies rescued the functional and repopulation defects of Fancd2−/− hematopoietic stem and progenitor cells (HSPCs).

Finally, the authors investigated the molecular mechanism by which the TGF-β pathway regulates DNA repair in the HSCs. Notably, it was demonstrated that an increased ratio of non-homologous end-joining (NHEJ)-associated genes to homologous recombination (HR)-associated genes, characteristic of Fancd2−/− mice, was reverted by inhibition of the TGF-β pathway, using the 1D11 neutralizing anti-TGF-β antibody. Additionally, to confirm that the genotoxic protection conferred by TGF-β inhibition was related to HR, it was demonstrated that the protective effects of the 1D11 antibody in Fancd2−/− HSPCs were neutralized if the DNA recombination/repair protein, RAD51, was also inhibited in these cells. The involvement of the TGF-β pathway in maintaining the balance of NHEJ and HR in FA cells was finally confirmed through quantification of the activity of both DNA repair pathways in FA cells. These set of experiments concluded that blocking of the TGF-β pathway promotes DNA repair by enhancing HR versus NHEJ in FA cells.

It is evident that the BMF observed in patients with FA is an intriguing puzzle comprised of multiple pieces. However, in their paper Zang and coworkers describe for the first time that hyperactive TGF-β signaling constitutes a key piece of this puzzle (25) (Figure 1). The results presented in their study explain not only the TGF-β pathway as a primary controller of HSCs attrition in FA, but also open the possibility of developing new pharmacological therapies for BMF in patients with FA, and aim to minimize the negative effects induced by the accumulation of DNA damage in these cells. Although safety is the principal concern during the administration of TGF-β pathway inhibitors in patients with FA, it is noteworthy that these approaches have already been applied both in preclinical as well as in Phase I/II clinical studies, and are apparently safe and within tolerance limits in other diseases (26,27). Based on the contribution of the TGF-β pathway towards hematopoietic suppression in other diseases, for example, myelodysplastic syndrome (MDS) (28), the findings reported in the above study may have more general implications in other BMF diseases, apart from those proposed for FA.

Finally, in addition to the potential pharmacological applications of TGF-β inhibitors to prevent or delay BMF in patients with FA, the results of this study may also have a significant impact on the in vitro maintenance and expansion of HSCs isolated from patients with FA. This could be of particular relevance in the development of improved gene therapy and gene editing approaches, where the enhancement of HR poses a critical challenge for the clinical application of these approaches.